Rare Nautilus Spotted for First Time in 31 Years, but Will We See It Again? 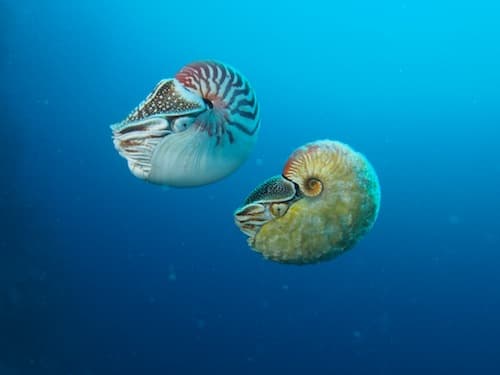 The deep blue sea is immense, complex, and full of mystery. According to the NOAA, some 95% of the ocean remains unexplored. In the mid 1980s, biologists first spotted a new nautilus species off the coast of Papua New Guinea. Dubbed Allonautilus, this distinct creature shocked observers with its unusual appearance, and then quietly disappeared for three long decades.

That is, until this summer.

IN SEARCH OF THE RARE NAUTILUS

For several years now, biologist Peter Ward has spent many a night trying to woo nautiluses in front of a camera. Not an easy feat, but his team was able to view these shy creatures with a "bait on stick" system. Essentially, the researchers suspended chicken and fish meat on a pole into rather deep water -- 500 to 1300 feet below the surface -- and then filmed 12 hours of activity each night.

"We started using this approach in 2011," Ward told reporters. "This year, there were about 30 guys involved and each day we would all watch the movies from the night before at 8X speed. There were a lot of 'ohs' and 'ahs'."

In order to better understand these elusive creatures, the biologists also captured them and brought them to the surface. This, too, was a tricky maneuver.

While prior tracking research has shown that the nautilus can withstand the pressure change, the warmer surface temperatures are detrimental. Thus, when bringing up the nautiluses up from the depths, the team ensured that they were kept in cool water. After measuring the animals and getting tissue, shell, and mucous samples, the nautiluses were then returned to their capture site.

The Allonautilus in particular, has proven to be quite interesting. Unlike other nautiluses, it's shell is covered with a slimy hair. “When we first saw that, we were astounded,” said Ward. However, that's not all -- their gills, shell shape, jaws, and male reproductive structures are also distinct.

But the question remains. How many of these creatures are out there and will we ever spot them again?

TRYING TO SAVE THE SPECIES

Long before the dinosaurs roamed the earth, nautiluses staked their claim in our oceans. Often referred to as "living fossils," gorgeous spiral nautilus shells have been found throughout the fossil record - dating back some 500 million years. They even survived two mass extinctions in our planet's history.

And yet, very real threats now act against these creatures. According to Ward, the problems are two-fold. First, is the increased sedimentation. Generated by deforestation on nearby islands, sediments wash into the oceans, potentially burying an entire food chain.

But perhaps most troubling are the illegal fishing and mining operations. When last checked, stunning Allonautilus shells were selling on eBay for hundreds of dollars. Certain nautilus populations have already been decimated, but shell collectors are often unaware of this concern.

“As it stands now, nautilus mining could cause nautiluses to go extinct,” said Ward. This month, the US. Fish and Wildlife will establish whether it will push to have nautilus listed as a protected species under the CITES treaty. If granted, this protection could help control international trade, and thus reduce nautilus harvesting.

In a phone interview, Ward conceded that we still do not know what role nautiluses play in the deep coral reefs. However, he warned that "its elimination might be the removal of a crucial card that keeps an elaborate house of cards erect. Ecosystems are fragile things."

Read This Next
Sundowned
Mexico Bans Startup From Future Solar Geoengineering Experiments
Knew It All Along
Exxon Scientists Knew About Global Warming for Decades While Company Denied It
Solar Slay
Solar Powered Machine Turns CO2 and Waste Plastic Into Valuable Fuel
Dim Sun for Breakfast
Startup Says It's Started Releasing Chemical Into Atmosphere to Dim Sun
Hidden City
NYC's Greenery Eats Up All the CO2 From Its Cars, Trucks and Buses "And Then Some"
More on Earth & Energy
RIP Fred
4:57 PM on the byte
Instead of Predicting Length of Winter, Groundhog Simply Dies
Fly Guy
Yesterday on the byte
Bird Advocates Horrified by Pigeon Dyed Pink For Gender Reveal Party
The Dos and Do-Do...
Yesterday on the byte
Startup Backed By "Jurassic World" Producer Says It Will Revive Extinct Dodo Using Complete Genome
READ MORE STORIES ABOUT / Earth & Energy
Keep up.
Subscribe to our daily newsletter to keep in touch with the subjects shaping our future.
+Social+Newsletter
TopicsAbout UsContact Us
Copyright ©, Camden Media Inc All Rights Reserved. See our User Agreement, Privacy Policy and Data Use Policy. The material on this site may not be reproduced, distributed, transmitted, cached or otherwise used, except with prior written permission of Futurism. Articles may contain affiliate links which enable us to share in the revenue of any purchases made.
Fonts by Typekit and Monotype.