Newly Spotted Quasar Is 600 Trillion Times Brighter Than the Sun

Don't stare into the quasar. 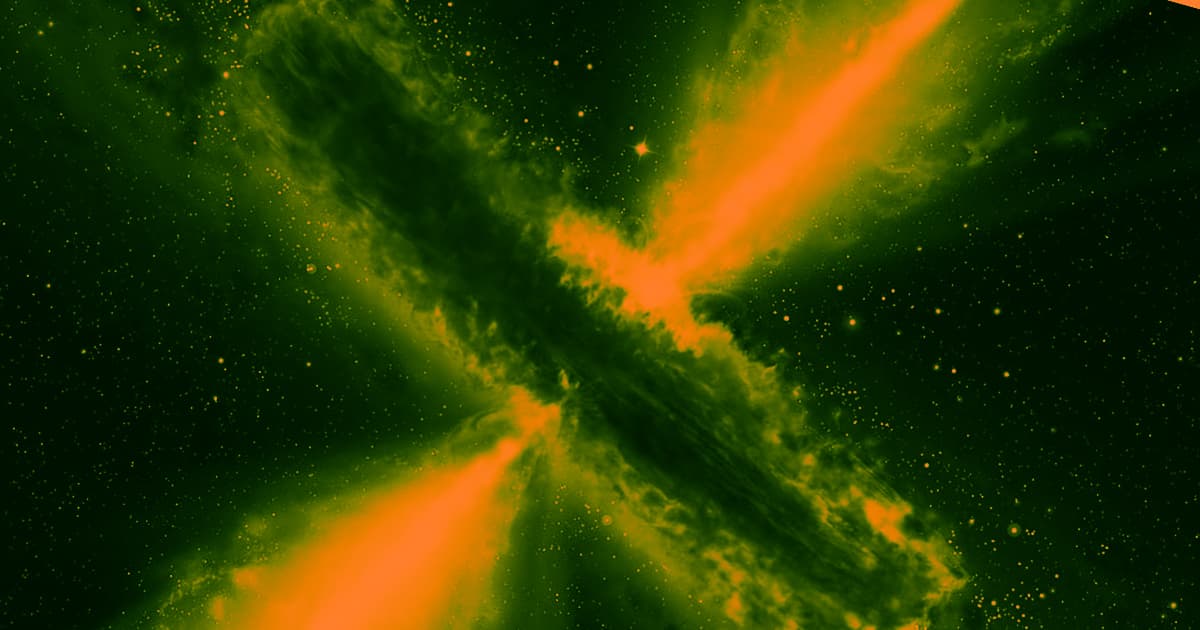 The galactic nuclei known as quasars are unfathomably bright celestial objects powered by supermassive black holes. Now, astronomers using some of the most advanced terrestrial and space telescopes in existence think they've discovered the brightest quasar ever observed in the early universe — one that shines with the power of 600 trillion Suns.

"We don’t expect to find many quasars brighter than that in the whole observable universe," lead investigator Xiaohui Fan, a professor of astronomy at the University of Arizona, said in a news release.

The new quasar is a distant 12.8 billion light-years away, and the team spotted it using equipment including the Keck Observatory, the James Clerk Maxwell Telescope, and the Hubble.

Fan and his collaborators were only able to detect the quasar, they said, because a galaxy came between it and the Earth — meaning that an effect called gravitational lensing could magnify its light substantially.

It's also a big deal because it provides a window into how huge black holes affected star formation during the early universe. Additionally, it confirms a suspicion long held by astrophysicists and could help guide future research.

"This detection is a surprising and major discovery; for decades we thought that these lensed quasars in the early universe should be very common, but this is the first of its kind that we have found," said Fabio Pacucci, a postdoctoral associate at Yale University who helped discover the new quasar. "It gives us a clue on how to search for ‘phantom quasars’ — sources that are out there, but cannot be really detected yet."

Editor’s Note 1/9 at 8:50 PM ET: This article has been updated to correct an error about how far away the quasar was located.

Read This Next
Kilonova Blast
Staggering Galactic Explosion Blamed on Black Hole Collision
Monkey Business
China Plans to Send Monkeys to Space Station to Have Sex With Each Other
Overview Effect
William Shatner Says His Space Trip Left Him With a Feeling of Terrible Grief
Outing Life
Swiss Government Scientist Says We May Be on the Brink of Discovering Alien Life
Astronaut Drip
We Just Got the First Peek at NASA's Artemis Moon Landing Suits
More on Off World
Final Selection
5:16 PM on the byte
NASA Finalizing Secretive Decision on First Astronauts for the Artemis Moon Mission
Hall Effect
Yesterday on futurism
Test Suggests Ion Thrusters Could Power Crewed Interplanetary Missions
CHON: Legacy
Yesterday on the byte
James Webb Discovers Coldest Ice in Known Universe, Harboring Molecules Essential For Life
READ MORE STORIES ABOUT / Off World
Keep up.
Subscribe to our daily newsletter to keep in touch with the subjects shaping our future.
+Social+Newsletter
TopicsAbout UsContact Us
Copyright ©, Camden Media Inc All Rights Reserved. See our User Agreement, Privacy Policy and Data Use Policy. The material on this site may not be reproduced, distributed, transmitted, cached or otherwise used, except with prior written permission of Futurism. Articles may contain affiliate links which enable us to share in the revenue of any purchases made.
Fonts by Typekit and Monotype.