Plans For an "Oceanscraper" Revealed 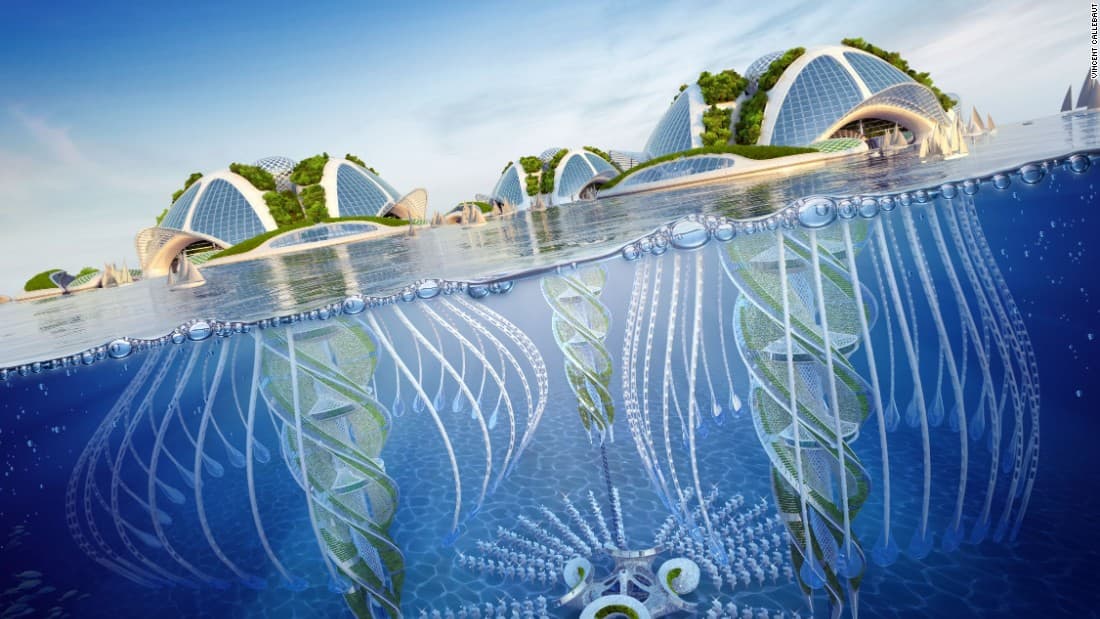 Belgian architect Vincent Callebaut unveils a concept for underwater eco-villages that can potentially house up to 20,000 people. Dubbed Aequorea, the project imagines the creation of self-sufficient “oceanscrapers” that rise from the sea floor to mangrove-covered marinas.

The structures feature a jellyfish like aesthetic and would be constructed from recycled plastic, which can be taken from the Great Pacific Garbage Patch (an immense portion of the ocean that is comprised of microplastic debris from human garbage).

Aequorea can also potentially house science labs, offices, hotels, sports fields, and farms—basically, all of the typical amenities that can be found on land. It’s set to spread across 250 floors reaching down to depth of up to 1000 meters (3,280 feet).  Seawater can be desalinated to be potable, microalgea can be used to recycle organic waste and light can be provided through bio-luminescence

Could Aequorea Ever Come to Be?

In terms of natural disasters caused by strong currents, storms, and even earthquakes, the structure of the oceanscrapers are designed to counteract marine whirlpools with their natural buoyancy. The structure will also be designed so that the outer shell would increase as it goes deeper and be able to stand against the increasing pressure.

Still at the very early concept stage, many believe that the possibility of living underwater is nothing but a Utopian dream.

However, to date, humans have already been testing out living underwater, albeit for very brief periods and within a research capacity, as seen in the Aquarius Reef Base off the Florida Keys.

Numerous other sub-aquatic leisure facilities are also now currently available, such as the Ithaa Undersea Restaurant located in the Conrad Hilton in the Maldives (which is 5 meters [16 feet] below the Indian Ocean), the Museo Subaquatico de Arte (an underwater museum in Cancun Mexico), and the Water Discs Underwater Hotel in Dubai (which is currently under construction and will feature 21 sub-aquatic rooms with views of the surrounding coral reef).

Read This Next
FROM THE DEPT. OF THINGS TO BUY
The Best Tablets for Note-Taking of 2022
Butcher Shop
Neuralink Employees Admit Company Has Killed 1,500 Animals So Far
HIV Vaccine
Scientists Hopeful About Promising Results From HIV Vaccine
Health Revelation
Chris Hemsworth Reveals Grim Genetic Test Results, Will Take Break From Acting
PDA
Elon Musk Is Faving Posts on Twitter That Are Making Our Skin Crawl With Embarrassment
More on Sci-Fi Visions
Crypto Apocalypse
Wednesday on the byte
Crypto Investors Despondent After Losing Life Savings in FTX "Bloodbath"
LIfe Finds a Way
Dec 1 on the byte
Billionaire Private Astronaut Suggests Reviving Dinosaurs
Cybersecurity Dis...
Nov 13 on the byte
Insurance Company Refuses to Pay Ransom, So Hackers Start Releasing Health Records of Up To 10 Million People
READ MORE STORIES ABOUT / Sci-Fi Visions
Keep up.
Subscribe to our daily newsletter to keep in touch with the subjects shaping our future.
+Social+Newsletter
TopicsAbout UsContact Us
Copyright ©, Camden Media Inc All Rights Reserved. See our User Agreement, Privacy Policy and Data Use Policy. The material on this site may not be reproduced, distributed, transmitted, cached or otherwise used, except with prior written permission of Futurism. Articles may contain affiliate links which enable us to share in the revenue of any purchases made.
Fonts by Typekit and Monotype.