The Phoenix: The $40,000 Robot Exoskeleton That Lets The Paralyzed Walk Again 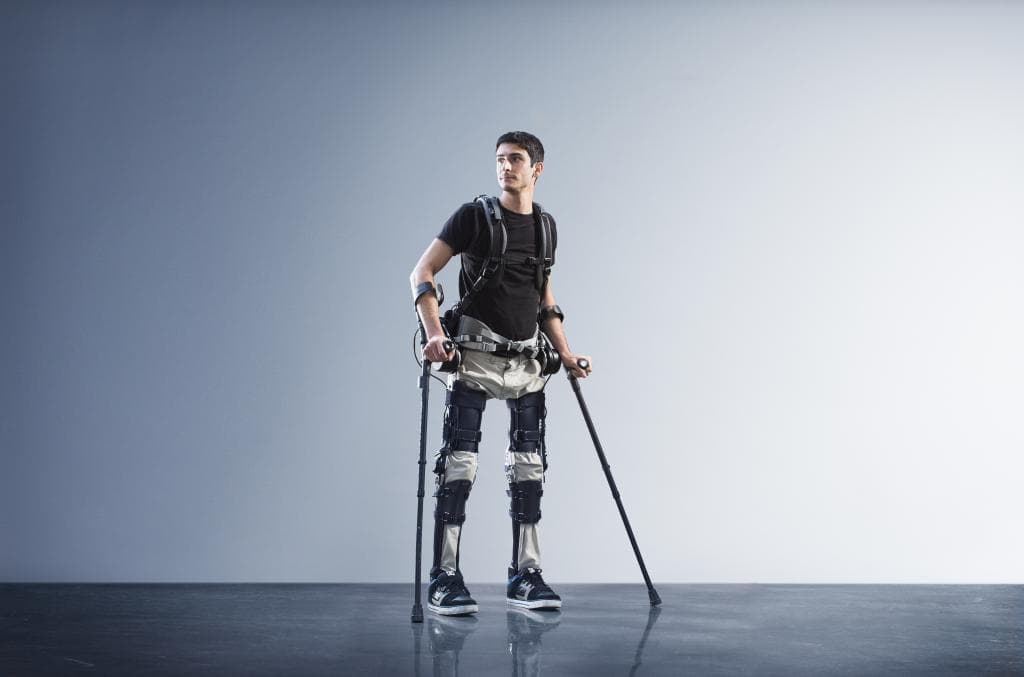 Over the last few years, a number of technologies have been developed that let paralyzed individuals regain the ability to walk (or even walk for the first time). Now, we can add a new device to that list.

The Phoenix is a $40,000 robotic exoskeleton created by SuitX. It allows wearers to move their hips and knees with the help of small motors that are attached to standard orthotics. Movement is controlled by pushing buttons found on a pair of crutches that are integrated into the suit.

“We can’t really fix their disease. We can’t fix their injury,” says Homayoon Kazerooni, SuitX founder and CEO. “But what it would do is postpone the secondary injuries due to sitting. It gives a better quality of life.”

Weighing in at just 12 kilograms (26 pounds), the Phoenix is one of the lightest and cheapest medical exoskeletons available today. The suit is also modular and adjustable, which means it can adapt to wearers who have various needs.

Of course, there are no electrical cords involved (at least not in the traditional sense). The system is powered by a battery pack that’s worn like a backpack, and it is able to keep the gear running for up to eight hours.

Rise of the Exoskeletons

The Phoenix was developed with technology that comes from the Robotics and Human Engineering Laboratory at the University of California, Berkeley. Kazerooni, who leads the Berkeley lab, says that the project’s major goal is to develop a version of the suit for children.

The exoskeleton was developed with patients with spinal cord injuries in mind, but could also offer therapeutic benefits for patients who suffer from strokes or other motor injuries.

Exoskeleton research is steadily gaining interest with suits like the Phoenix and the ReWalk. According to Volker Bartenbach, an exoskeleton researcher at ETH Zurich, given the right combination of performance, price, and benefits that are clinically proven, exoskeletons could see wider adoption and could compete with motorized wheelchairs.

“Speed, operating time, mobility, and usability have to be good enough so that those systems are perceived as better by the user than the alternatives,” says Bartenbach. “If you need 10 minutes to walk to the bakery 300 feet away in your exoskeleton that takes five minutes to put on, you will probably use the wheelchair instead.”

To that end, there still need to be improvements, but it is inspiring research.

Read This Next
Futurism
The 20 Semifinalist Designs in the Artificial Intelligence and Robotics for Good Award
More on Artificial Intelligence
Sing Me a Song
Yesterday on the byte
Google Officially Announces ChatGPT Competitor Called "Bard"
Hmmmmmmmm
Yesterday on the byte
Head of ChatGPT Admits She Had Concerns About Releasing It Publicly
Judge Dredd
Yesterday on the byte
Judge Uses ChatGPT to Issue Ruling in Court Case
READ MORE STORIES ABOUT / Artificial Intelligence
Keep up.
Subscribe to our daily newsletter to keep in touch with the subjects shaping our future.
+Social+Newsletter
TopicsAbout UsContact Us
Copyright ©, Camden Media Inc All Rights Reserved. See our User Agreement, Privacy Policy and Data Use Policy. The material on this site may not be reproduced, distributed, transmitted, cached or otherwise used, except with prior written permission of Futurism. Articles may contain affiliate links which enable us to share in the revenue of any purchases made.
Fonts by Typekit and Monotype.