NASA snapped a tasty-looking photo of one of Mars' moons. 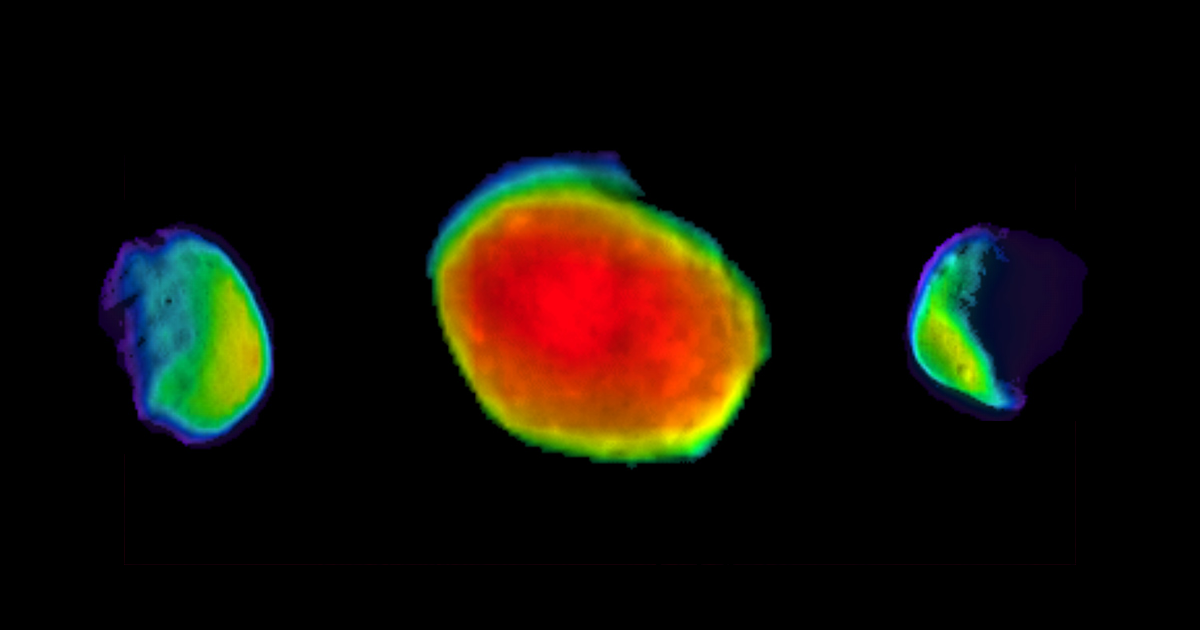 Since 2001, Odyssey has been dutifully orbiting the Red Planet. Billed as looking "like a rainbow-colored jawbreaker," the colorful images could help scientists determine more about the surface of Phobos and, perhaps, prepare to one day land a spacecraft there.

Each color in the image represents a different temperature, and further analysis could help clue NASA researchers into what awaits on Phobos' surface. Odyssey first turned its thermal camera toward Phobos in late 2017, but this is the first time it's caught Phobos during its full moon phase, meaning more light was shed on its surface, resulting in a more colorful photo.

"With the half-moon views, we could see how rough or smooth the surface is and how it's layered," said Joshua Bandfield, a senior research scientist at the Space Sciences Institute, said in a press release, "Now we're gathering data on what minerals are in it, including metals."

Initial analysis suggests that Phobos contains some iron and nickel. The exact quantity of each could help determine whether Phobos was once a part of Mars or if it formed from chunks of asteroids.

While Phobos has long been a target of missions launched by both the Russian space agency and NASA, no craft has successfully set down on its surface. That makes a 2024 sample return mission to the moon planned by the Japan Aerospace Exploration Agency all the more exciting.

Phobos has, in the past, been considered as a possibility for human base building in an effort to aid crewed missions to Mars. Determining the moon's exact makeup would drastically aid in planning such a settlement — and that's what makes these colorful candids even sweeter.

More on Mars Missions: Japan’s Space Agency Will Be Going to the Moons of Mars in 2024

Read This Next
Hello Darkness
NASA Proposes Sending Spacecraft to Measure Mysterious Dark Matter
Jupiter Jokesters
Nitwits Claim Wrongly to Have Disproved the Existence of Jupiter
Captain Planet
Planet Nine Might Not Actually Exist, Scientists Say
Bad Trip
Galactic Collision Could Fling Our Solar System Into Intergalactic Space
Farout
Astronomers Just Found a Dwarf Planet Three Times As Far Away As Pluto
More on Off World
Heavy Metal
6:27 PM on the byte
NASA Mars Rover Finds Metallic Object That Smashed Down on Surface
Small But Mighty
5:44 PM on the byte
Baby Asteroid Photobombs James Webb On Accident
Little Guy
3:28 PM on the byte
Scientists Prototype "Creeping" Lizard-Like Robot for Exploring Mars
READ MORE STORIES ABOUT / Off World
Keep up.
Subscribe to our daily newsletter to keep in touch with the subjects shaping our future.
+Social+Newsletter
TopicsAbout UsContact Us
Copyright ©, Camden Media Inc All Rights Reserved. See our User Agreement, Privacy Policy and Data Use Policy. The material on this site may not be reproduced, distributed, transmitted, cached or otherwise used, except with prior written permission of Futurism. Articles may contain affiliate links which enable us to share in the revenue of any purchases made.
Fonts by Typekit and Monotype.