New Evidence That Alien Life Could Exist on Comet 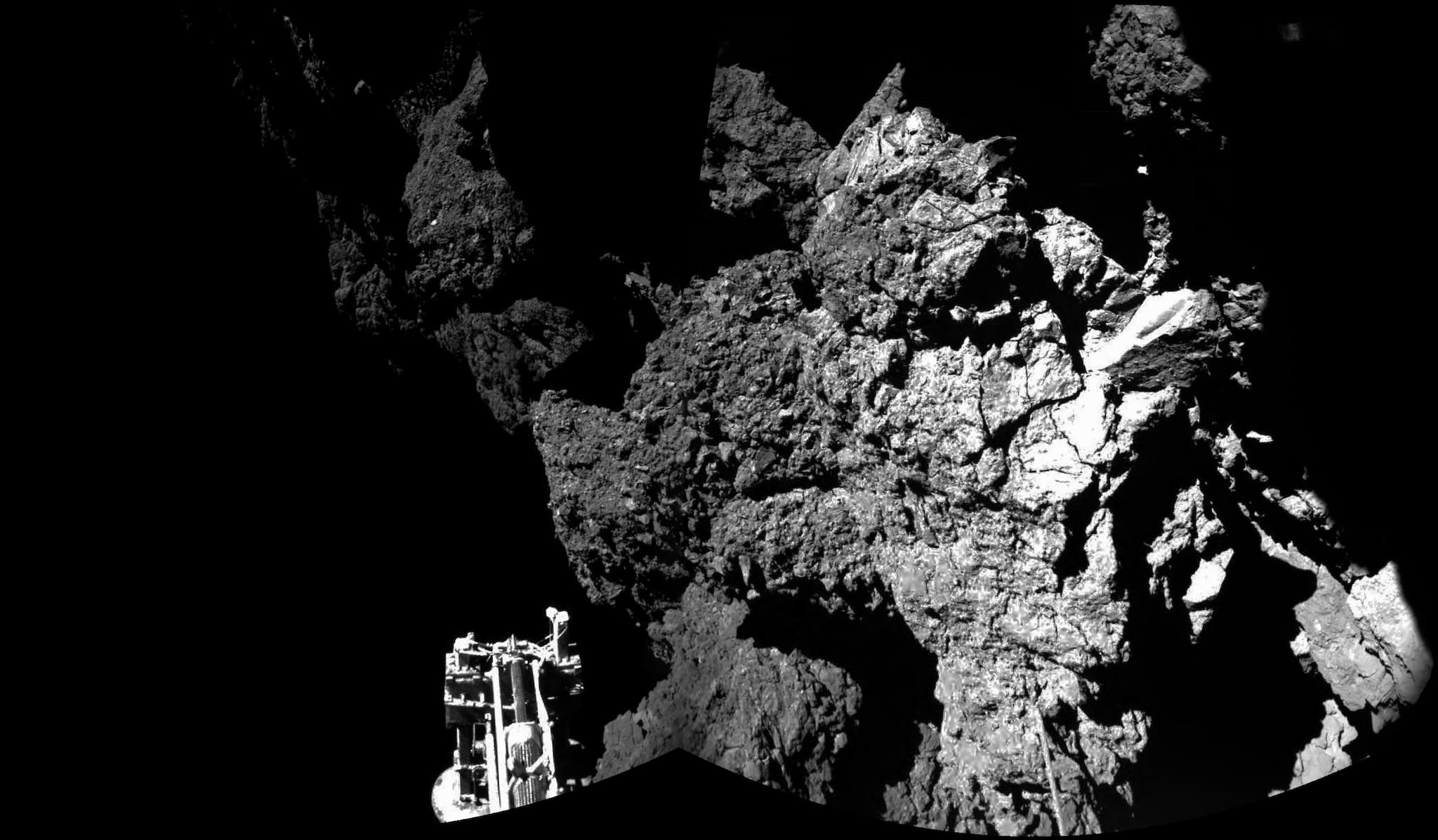 Last November, the Philae spacecraft made history when it landed on the comet 67P/C-G. Days after the remarkable feat scientists lost contact with solar powered craft, as it was lodged in an area without sunlight and couldn’t recharge. They regained connection in June and the data it has been sending back could have very exciting implications.

Researchers Max Wallis and Chandra Wickramasinghe are presenting their findings today to the Royal Astronomical Society and they believe the data could indicate that the comet is carrying microbial alien life. Under the dark hydrocarbon crust, there are “icy seas,” and the water freezes and melts as the comet comes close to or goes far from the sun in its orbit. The water could hold these microbes, the researchers claim, as certain organisms with ‘anti-freeze salts’ could exist in it. Reportedly, the accompanying spacecraft Rosetta, that is orbiting the comet, has collected mysterious organic material that seem like viral fragments.

Neither spacecraft was ever equipped with technology that could directly confirm the presence of life because the team decided it would be thoroughly unnecessary and relatedly, Wickramasinghe’s views have been largely considered outside the astronomical mainstream. Yet, with the coming research on the comet and the ever growing field of astrobiology, we could all be surprised. Wickramasinghe himself says, “Five hundred years ago it was a struggle to have people accept that the Earth was not the centre of the universe. After that revolution our thinking has remained Earth-centred in relation to life and biology. It’s deeply ingrained in our scientific culture and it will take a lot of evidence to kick it over.” That evidence is potentially already being collected.

Read This Next
Monkey Business
China Plans to Send Monkeys to Space Station to Have Sex With Each Other
Overview Effect
William Shatner Says His Space Trip Left Him With a Feeling of Terrible Grief
Astronaut Drip
We Just Got the First Peek at NASA's Artemis Moon Landing Suits
Blast Off
Former Astronaut Details Quest to Grow Cannabinoids in Space
RIP
Unfortunate Comet Flies Too Close to the Sun, Disintegrates and Becomes a Ghost
More on Off World
Hall Effect
3:22 PM on futurism
Test Suggests Ion Thrusters Could Power Crewed Interplanetary Missions
CHON: Legacy
3:19 PM on the byte
James Webb Discovers Coldest Ice in Known Universe, Harboring Molecules Essential For Life
Is There?
3:14 PM on the byte
NASA Setting Up Facility For Mars Rock Samples That Might Contain Alien Life
READ MORE STORIES ABOUT / Off World
Keep up.
Subscribe to our daily newsletter to keep in touch with the subjects shaping our future.
+Social+Newsletter
TopicsAbout UsContact Us
Copyright ©, Camden Media Inc All Rights Reserved. See our User Agreement, Privacy Policy and Data Use Policy. The material on this site may not be reproduced, distributed, transmitted, cached or otherwise used, except with prior written permission of Futurism. Articles may contain affiliate links which enable us to share in the revenue of any purchases made.
Fonts by Typekit and Monotype.