Surgeon: "So, we will explode together." 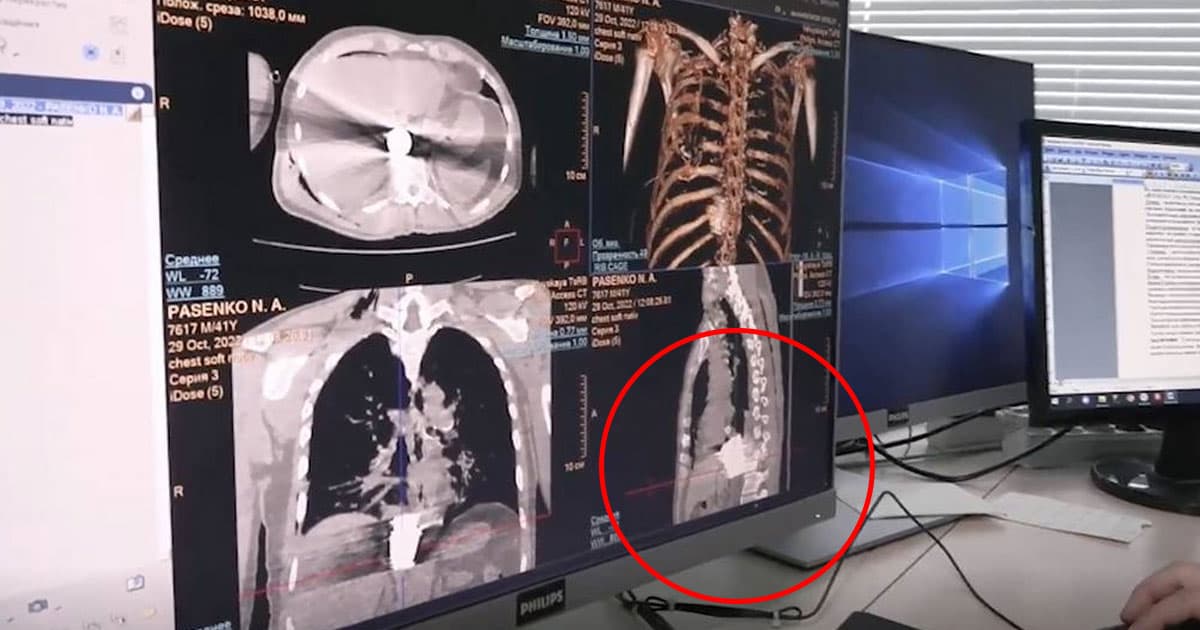 A Russian soldier was rushed to the ER. His diagnosis? An unexploded shell lodged so deep in his chest it was almost touching his spine.

The soldier, junior sergeant Nikolay Pasenko, probably should've been dead already from either the impact or the impending detonation. But instead, defying all expectations, he lived — thanks to surgeons at the Mandryk Central Military Clinical Hospital who successfully removed the shell in an operation that's been dubbed a "miracle" by TASS, a state-owned Russian news agency.

Given Russia's ongoing and near-universally condemned war in Ukraine, you might be inclined to doubt the veracity of the source — but miracles like this have happened before.

"The patient was admitted with a wound that had penetrated [his] chest," the Russian Defense Ministry said in a statement, as quoted by TASS. "The examination revealed that the miraculously unexploded ordnance had pierced [his] ribs and lungs and got lodged close to the spinal cord, between the aorta and the inferior vena cava near the heart."

There was no guarantee that the munition wouldn't explode mid-surgery. The doctors — some military, some civilian — decided to operate on the soldier anyway, wearing body armor under their medical gowns, the Ministry said.

And the surgery had to be done fast — Pasenko was bleeding so profusely that there was no time to dawdle on a decision, let alone relocate to a safer or better equipped location.

"The unexploded shell was stuck between the aorta and the inferior vena cava close to the heart, which could have caused fatal bleeding even without the ordnance's detonation," Medical Corps Lieutenant-Colonel Dmitry Kim, who led the operation, told TASS. "A decision was made to carry out the surgery locally."

That decision proved to be the right call. The shell was removed without detonation, and a recovering Pasenko was shipped off to a central hospital.

But post-surgery, Pasenko said that, at the time, he was opposed to the doctors risking their lives.

"The surgeon ventured to perform the operation, I was against it," he told the Russian news agency. "And now you see that I am sitting in front of you."

"My thanks to surgeon Dmitry Kim and I will be grateful to him for the rest of my life. He replied: 'So, we will explode together.' That's it. He is a very courageous man," Pasenko said.

9.15.22
Inside the Minds of the Short Men Who Get Their Legs Broken to Add 3-6 Inches of Height
4.01.22 Cancer
Putin Almost Always Accompanied by Cancer Specialist, Investigation Finds
1.19.22 Developments
Man Horribly Injures Penis After Injecting It with Insulation Foam
1.13.22 Developments
Surgeon Stripped of License for Carving His Initials Into Patients' Organs
10.04.21 Treatments
Doctors Alarmed by Man Who Quit Drinking and Started Swallowing Metal Nails and Screws