Tooth-Mounted Diet Tracker Could Feed Our Unhealthy Relationship With Food

The sensor can track salt, glucose, and alcohol, so you can obsess over every bite. 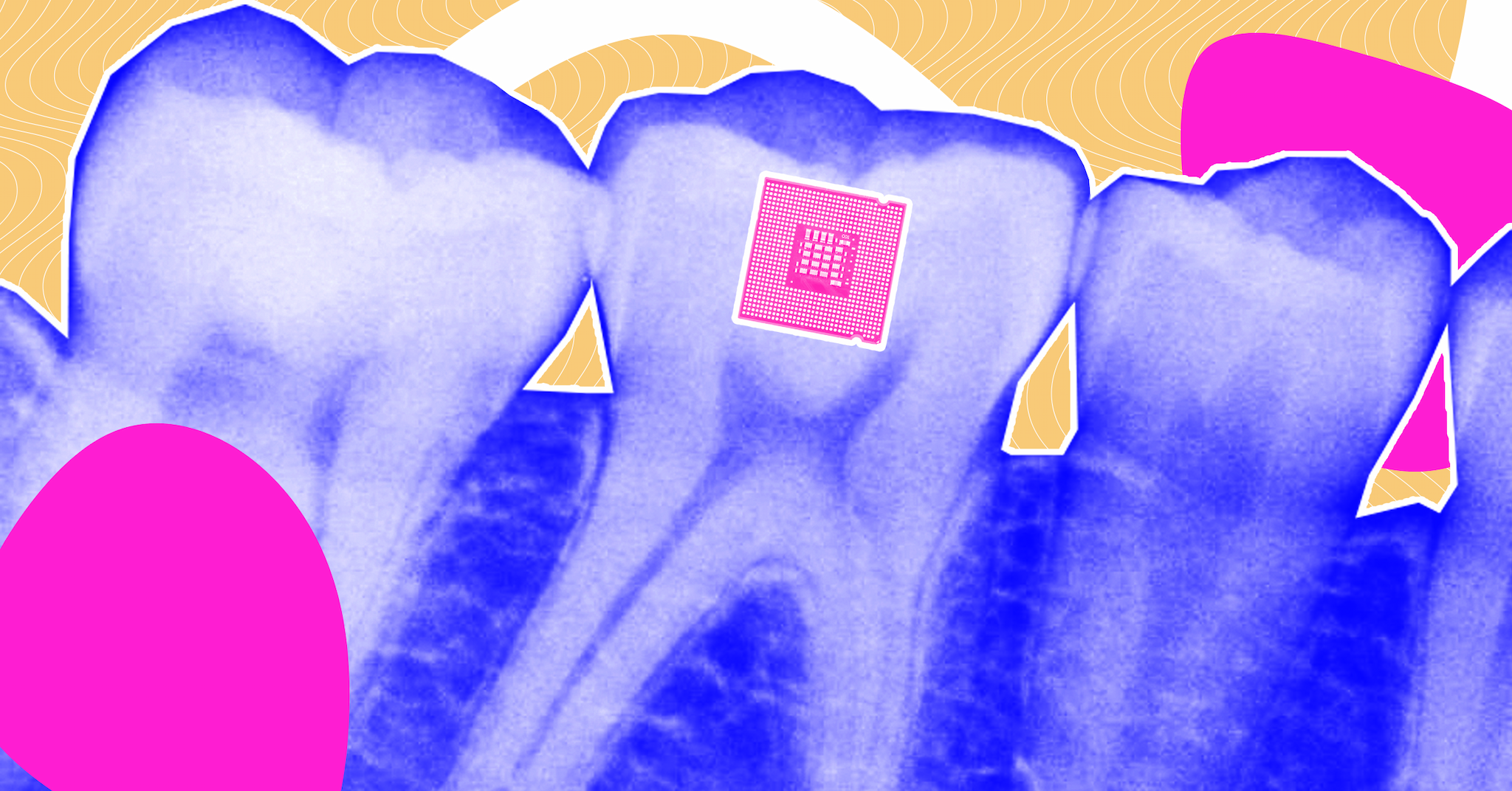 Is Fitbit not accurate enough for you? Apple Watch simply not invasive enough?

Maybe a wearable stuck to your tooth would be more your style.

Researchers at Tufts University have created just that. They've engineered a tooth-mounted sensor that tracks your every bite (and what it contains). Such a device could be useful, but it could also exacerbate our already-problematic relationship with food.

The device is two square millimeters in size and sticks to the surface of a tooth. The sensor is ingeniously simple — when its central layer changes encounters different chemicals (salt, ethanol), its electrical properties shift, transmitting a different spectrum of radio waves. Currently, the patch is set up to wirelessly transmit information about glucose, salt, and alcohol to a mobile device; its creators think it could be adapted to monitor even more metrics, including "a wide range of nutrients, chemicals and physiological states," according to a press release.

With such a simple and inexpensive design, the sensor could be made widely available. That could be a huge boon to researchers who need a cheap way to track nutrients in a study, or to people who want to get their diet in check and for whom expensive fitness trackers are out of reach, or just don't cut it. After all, let's face it, we're terrible at remembering what we ate, and how much of it.

But a tracker like this one could also have some negative side effects.

Mobile calorie and exercise-tracking apps already allow people to obsess over their every meal down to the macronutrient, and anecdotal evidence suggests doing so can exacerbate obsessive compulsive disorder (OCD) and eating disorders. Clinical psychologist Lara Pence, of the Renfrew Center Eating Disorder Treatment Facility, told New Republic: “It doesn’t really take research for us as an organization or for me as a clinician to see their damaging qualities." She emphasized that the sense of guilt that trackers promote when a user surpasses their calorie allotment “speaks to the very core pathology of the disease: If I do this, then I have to do that.”

Indeed, one 2017 study found that fitness tracking devices in general were associated with eating disorder symptoms among college students (though, strangely, the same didn't hold true for calorie counting apps). Unfortunately, there's a considerable lack of clinical research on their broader impact.

How would a sensor that takes away the most labor-intensive part of fitness tracking — data entry — fit into that trend? To paint with a broad brush, modern culture already has an unhealthy obsession with appearance and body type. A tooth-mounted sensor probably wouldn't give people eating disorders; these medical conditions are much more complex than that. But it could potentially worsen the symptoms of people who already have these disorders, and make it much easier for others to forget that eating sometimes isn't just about calories and nutrients — it's also something that can bring cultural understanding and, you know, joy.

7.29.19
The Keto Box Delivers Low-Carb, Keto-Friendly Snacks Right to Your Door
4.04.19
This High-Tech Test Could Be the Answer to America's Gut Health Crisis
3.27.19
This Nootropics Company Developed the Keto Diet Hack You've Been Waiting For
3.20.19
Japan Poised to Declare CRISPR-Edited Foods Safe to Eat
2.19.19
Bosses Are Spying on Employees With Work-Provided Fitness Trackers