"The next milestone in this field very likely will be a synthetic stem-cell based human embryo." 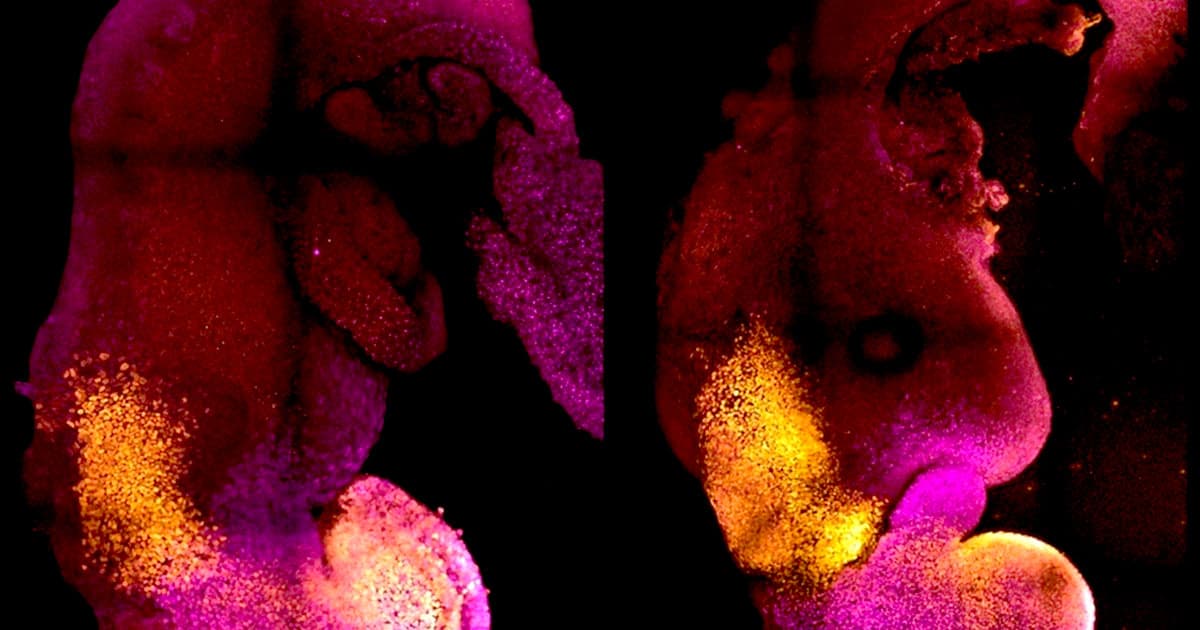 A team of scientists in the UK have created "synthetic" mouse embryos without egg or sperm cells.

It's a breakthrough in the field of genetic engineering that could potentially lay the groundwork for synthetic human embryos as well — despite thorny ethical implications.

As detailed in a new paper published in the journal Nature, a team led by Magdalena Zernicka-Goetz at the University of Cambridge turned mouse stem cells into an embryo that was able to start growing a brain, heart, and other organs for just over a week.

"This is really the first model that allows you to study brain development in the context of the whole developing mouse embryo," said Zernicka-Goetz during a press conference.

"It’s an absolutely fantastically complex stage of development, and it has extremely relevant meaning for the rest of our life," she added.

Most excitingly, the stem cells were able to divide and organize themselves into the form of an embryo on their own, allowing them to live for up to eight and a half days.

Other scientists couldn't contain their excitement.

"This is very, very exciting," Jianping Fu, a bioengineer at the University of Michigan, who was not involved in the research, told Nature. "The next milestone in this field very likely will be a synthetic stem-cell based human embryo."

"We are undoubtedly facing a new technological revolution, still very inefficient… but with enormous potential," Lluís Montoliu, a research professor at the National Biotechnology Centre in Spain, who was also not involved in the research, told the Associated Press.

"It is reminiscent of such spectacular scientific advances as the birth of Dolly the sheep," he added.

The news also comes mere weeks after researchers in Israel announced the creation of the world's first lab-grown "synthetic embryo" inside a specially designed incubator. That team was led by Weizmann Institute of Science molecular geneticist Joseph Hanna, who coauthored the latest paper as well.

Growing embryos outside the uterus gives scientists an unprecedented ability to observe their development. It also allows scientists to edit the embryos' genes far more easily, according to Nature.

Scientists could also learn about why many human pregnancies end prematurely in miscarriages, allowing them to study why certain fetal defects occur.

Taking what they've learned and applying it to human embryos, however, is still years out.

And that's not to mention the myriad of ethical concerns surrounding such research. Stem cell researchers have long advised against allowing human embryos to survive past day 14, as Nature reports.

Despite such considerations, the ability to grow embryos with organs without the need of a uterus, sperm, or an egg is a spectacular demonstration of how far the field of stem cell research has come.

"In the future, similar experiments will be done with human cells and that, at some point, will yield similar results," developmental biologist Alfonso Martinez told the AP. "This should encourage considerations of the ethics and societal impact of these experiments before they happen."

READ MORE: Mouse embryos grown without eggs or sperm: why and what’s next? [Nature]