Scientists Found a Way to Radically Reduce Scarring, Thanks to Sea Creatures

Large visible scars could become a thing of the past.
by Chelsea Gohd / May 15 2017

From combat to everyday injuries, wound care is a vital part of healthcare. Patients in nursing homes, those recovering from amputations and diabetes complications, and so many more battle ongoing wounds. In fact, chronic wounds often take enormous amounts of time to heal, some never fully healing at all. However, in almost all of these cases, patients are left with scars, visible reminders of their trauma and pain. However, thanks to one new development, scar care might be getting a strange, but incredible, makeover.

Scars are formed as a result of “broken” collagen. When collagen fibers regrow it is in a different pattern that creates the visible scars that we’re familiar with.

But scientists may have found a way to circumvent this process. Goop secreted by mussels, yes, those bivalve mollusks, has been shown to be a crucial ingredient in a glue that could revolutionize wound care, according to a new study published in Biomaterials. Allison Cowin from the University of South Australia, who wasn’t involved in the study, said in an interview with New Scientist, “If this can be replicated in humans, it might be the next big thing for scar therapy.” 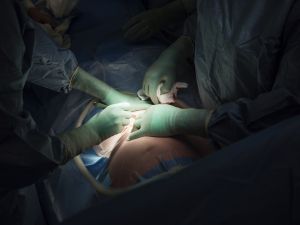 The impact of this discovery could be huge because scars can interfere with personal image, self-esteem, and long-term happiness. Previously, doctors used the skin protein decorin to reduce scars, but it is difficult to synthesize and produce.

Other researchers have developed alternative means of dealing with scars, like developing new compounds to restore skin to its natural structure, but Hyung Joon Cha and his colleagues at Pohang University of Science and Technology in South Korea decided, instead, to create a simpler version of decorin. Their “glue” uses the mussel gloop, a piece of the decorin protein, and a molecule that binds collagen.

The team tested their glue with rats and, according to New Scientist, “By day 11, 99 percent of the wound was closed in the treated rats compared with 78 percent in the control group. By day 28, treated rats had fully recovered and had virtually no visible scarring. In comparison, control rats had thick, purple scars.”

This glue could completely change how we heal and move on from injuries. So many people have surgeries, stitches, or cuts of some kind. If this glue is as effective as it promises to be, large visible scars could be a thing of the past.

Share
FB
TW
EM
LK
More to read
1.
The Science of Skincare (and Why Men Shouldn’t Be So Quick to Dismiss It)
2.
Brutal “Nanodrills” Can Kill Tiny Living Worms and Water Fleas
3.
This Horrific “Yarn” Is Made From Human Flesh
4.
Scientists 3D-Printed Living Skin, Complete With Blood Vessels
5.
A New Discovery About Human Skin Could Help Us Eliminate Scarring
////////////