"You have no medical background, you're not a scientist. Yet you’re claiming this substance, which has not been studied in any meaningful way, can cure COVID." 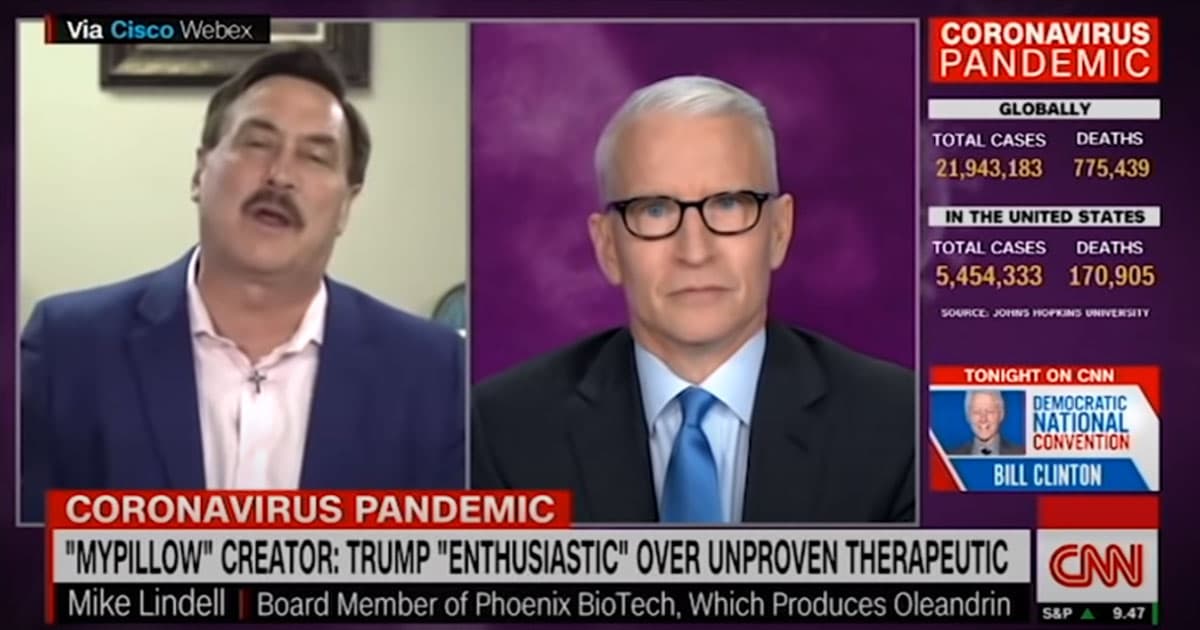 In a scathing CNN interview Tuesday, Anderson Cooper absolutely eviscerated MyPillow creator Mike Lindell for pushing the compound oleandrin as a cure for COVID-19 — even though it's not backed by any sort of scientific evidence.

Cooper begins the interview guns blazing, immediately questioning the credentials and motivations of Lindell, who is on President Trump's coronavirus task force and serves as a chair of his re-election campaign. Needless to say, you need to watch it.

"You have no medical background, you're not a scientist," Cooper began. "Yet you’re claiming this substance, which has not been studied in any meaningful way, can cure COVID. And you have a financial stake in the company. You would profit from it if this is being sold widely. Morally, is that right?"

Lindell, who reportedly has a financial stake in Phoenix Biotechnology, the company manufacturing oleandrin, repeatedly insisted that the drug had been thoroughly tested. But when he was pressed by Cooper, Lindell failed to name a single fact about the clinical trials and research — even basic details like where the research had taken place.

Facing that pressure, Lindell accused Cooper and the media of misconstruing the facts and trying to withhold a miracle cure that he claimed, despite having zero evidence, "works for everybody."

The entire interview is a thorough debunking of Lindell's oleandrin push as well as the sort of delusional thinking that tries to assert that the American government has a better grasp on the COVID-19 pandemic that it does.

But it also raises important questions about the media's role in presenting misinformation: Yes, Cooper pushed back on Lindell every time he lies on the air, but as The Washington Post reports, the interview drew criticism for how much air time Lindell got to share his distorted, dishonest perspective.

5.05.22
Head of FDA Says Misinformation Is Now the Leading Cause of Death
5.03.22 Developments
Chinese Nursing Home Brings Resident to Morgue While Still Alive
4.21.22 Developments
Censors in China Are Having a Hard Time Silencing All the Rage Right Now
4.07.22 Developments
It Is With Great Regret That We Inform You That We May Be Getting Slammed by Another COVID Wave
2.15.22 Genetics
Scientists Warn That Terrorists Could Release a Horrifying Virus