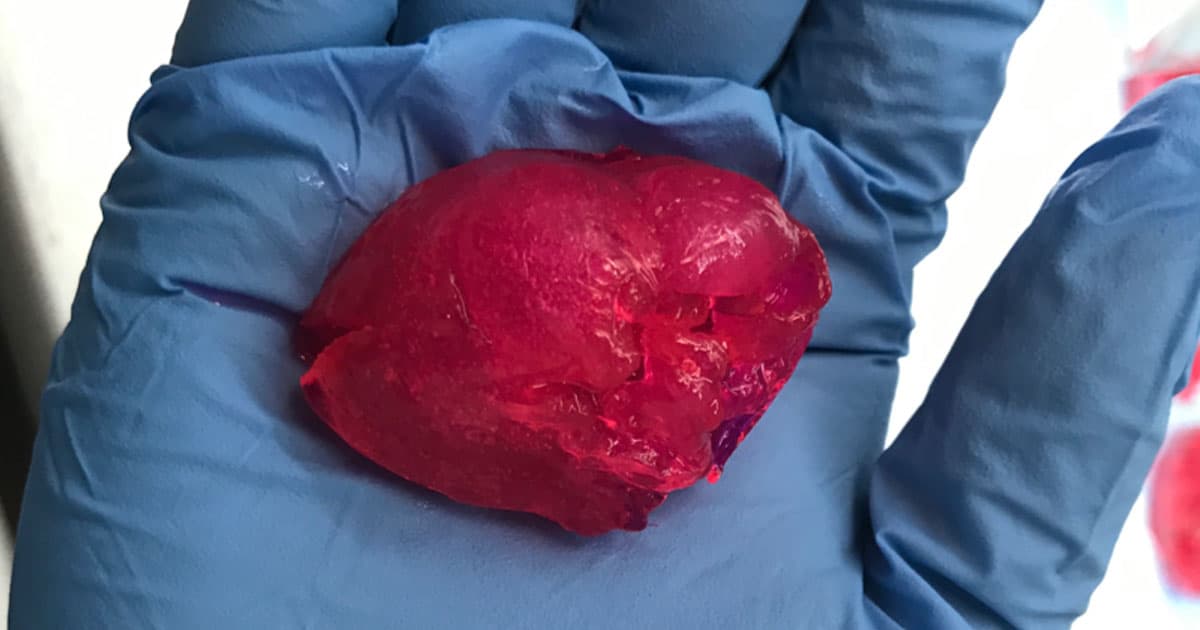 Image by Courtesy of Biolife4D
Breakthroughs

There's a national shortage of donor organs in the United States — a terrifying predicament for the hundreds of thousands of patients on transplant waiting lists. But a new technology has the chance to one day make the donor organ obsolete.

Chicago-based biotech outfit Biolife4D claims to have 3D bioprinted a miniaturized human heart — chambers, ventricles, and all. Though it's still years out, the long-term goal is to print full-scale human hearts that can be transplanted into human patients, like changing out a watch battery.

The company used a proprietary bioink — the company described it as "similar in properties to gelatin" — that was designed from the ground up to replicate actual human biomaterials. The heart was printed the same way a consumer-grade 3D printer prints small objects: layer by layer. To help with structural integrity during the printing process, Biolife4D printed an additional support scaffold encasing the heart.

Once fully printed, the heart was transferred to a bioreactor that mimics the conditions of the human body, helping the cells fuse themselves into tissue.

It's one of many recent breakthroughs in 3D bioprinting technology. An Israeli lab at Tel Aviv University made headlines in April with its similarly-miniaturized 3D-printed heart that uses the patient's own cells. Israeli media claimed it was the "world's first" 3D printed heart of its kind.

What sets its own mini-heart apart, according to Biolife4D, is its inner workings. It sports four major internal chambers and other structures, like valves, that are usually found inside the human heart.

Despite the advancements, the mini heart is far from ready for transplant. And rather than ensuring survival of a human patient, the mini heart could alternately become a viable tool for cardiotoxicity testing — the study of how drug treatments and medications could damage heart muscles.

In fact, that's what it was designed to do in the first place. According to Ravi Birla, the Chief Science Officer at BIOLIFE4D, the heart represents the company's "first potential opportunity to move the incredible technology to the market."

The company is already planning to scale up production to eventually bioprint a full-size human heart. But that may be a lot trickier than it sounds as it would require multiple cell types to be delivered to different regions — a process that might necessitate the development of "additional inks" according to Birla.

Biolife4D still has plenty of work to do before it can successfully transplant its printed heart into human or animal patients. Because after all, as Birla puts it, "the bar which must be met to survive in an animal for its life is higher than the bar to bioengineer a mini heart to be used for cardiotoxicity testing."

Image by Courtesy of Biolife4D