NASA finds signs of liquid water on the surface of Mars 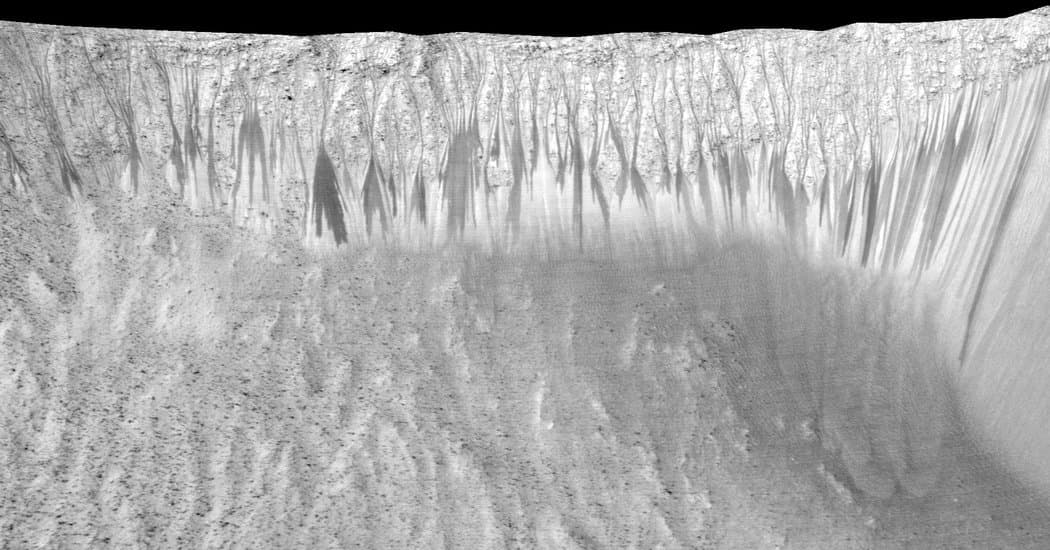 In a paper published in Nature Geoscience, researchers report they've found "perchlorates" in readings taken from Mars Curisosity. Perchlorates are a kind of hydrated salt that seriously implies that there was flowing water recently present. The perchlorates were found on canyons and crater walls during the warm seasons, and the faded when conditions became cooler. Scientists aren't sure where the water is coming from, with some possibilities being underground ice or aquifers.

“There is liquid water today on the surface of Mars,” The lead scientist on Nasa’s Mars exploration program told the Guardian. “Because of this, we suspect that it is at least possible to have a habitable environment today.” If we do send men to Mars, we should target these areas with potential running water.

Read This Next
What Does It All Mean?
The Second Alien Probe We Detect May Be Particularly Bizarre, Scientist Says
A Sip of Opal
NASA Discovers Precious Gemstones on Mars
And He Scores
We Are Completely Puzzled by This Video of a Chinese Astronaut Playing Ping-Pong in Space
Moon Wrestling
The Head of NASA Is Scared Chinese Astronauts Will Seize Portions of the Moon
Warped Perspective
Scientists Propose Method for Detecting Alien Warp Drive Activity
More on Off World
Floodgates
Yesterday on the byte
Astronomers Complain That the JWST Is Producing Too Much Data, Too Fast
Til Death
Yesterday on the byte
Buzz Aldrin Marries His Employee at the Young Age of 93
Snowball Moon
Jan 22 on the byte
Something Weird Is Happening on Saturn's Snow-Covered Moon, Scientists Say
READ MORE STORIES ABOUT / Off World
Keep up.
Subscribe to our daily newsletter to keep in touch with the subjects shaping our future.
+Social+Newsletter
TopicsAbout UsContact Us
Copyright ©, Camden Media Inc All Rights Reserved. See our User Agreement, Privacy Policy and Data Use Policy. The material on this site may not be reproduced, distributed, transmitted, cached or otherwise used, except with prior written permission of Futurism. Articles may contain affiliate links which enable us to share in the revenue of any purchases made.
Fonts by Typekit and Monotype.