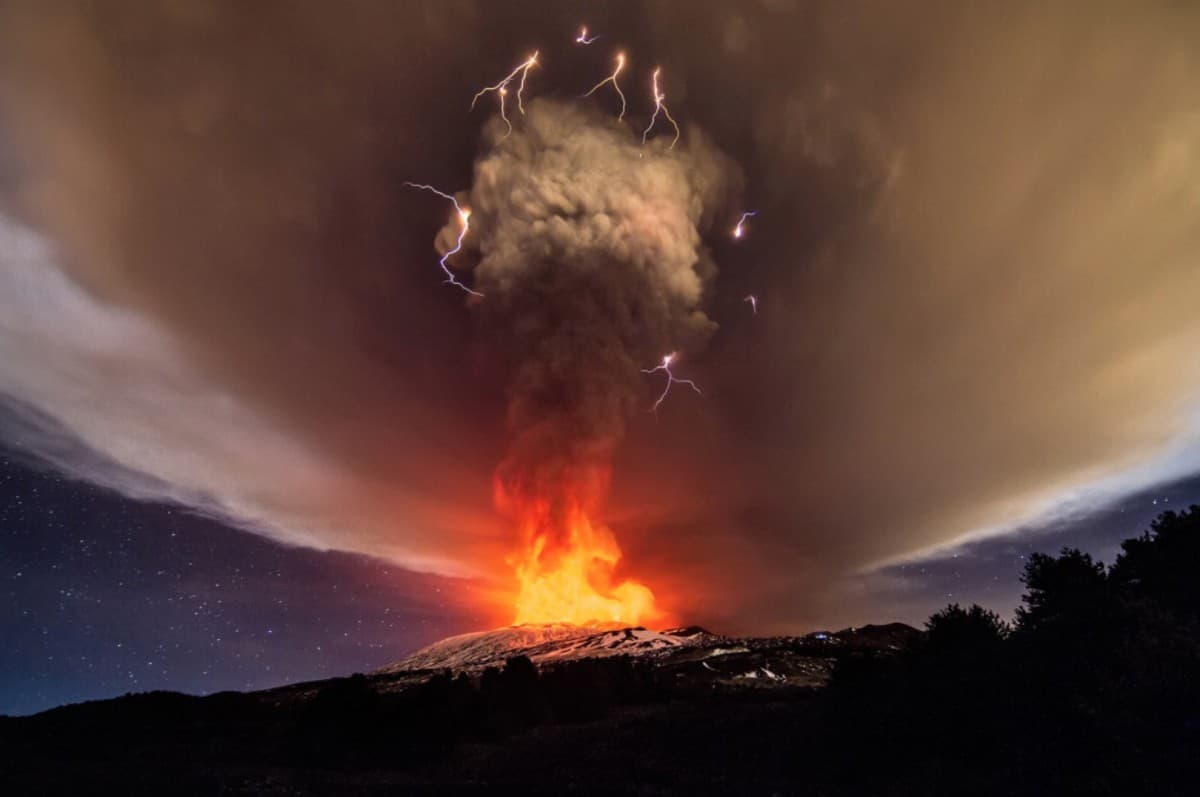 Last Thursday, all of Southern Italy woke to the sight of a anshen sky. The Mount Etna eruption shot lava up to 1 kilometer into the sky and an ash plume up to 3 kilometers (.6 to 1.8 miles, respectively). Volcanic lightning surrounded the plume. These “dirty thunderstorms” are created when volcanic ash builds up and the various particles in the cloud rub together. This friction creates electric charge, resulting to volcanic lightning strikes in areas around the ash plume.

Europe’s highest of most active volcano, Mount Etna is located on the east coast of Sicily, Italy, where it sits at the junction of three plates, the Eurasian, Adriatic and African Plates. Experts believe that the volcano sits atop a Hot Spot like the one found underneath the Hawaiian Islands. The complex geologic location under the volcano may explain the magma is able to easily reach the surface.

Read This Next
Futurism
Earthquake Swarm Shakes Mount St. Helens
More on Hard Science
Tractor Beam
Jan 26 on the byte
Scientists Build Working Tractor Beam, Although It's Comically Tiny
Having a Blast
Jan 18 on the byte
New Study Shows Where You Should Hide to Survive a Nuclear Attack
Offworld Amino
Jan 15 on the byte
Scientists Find Building Blocks of Life in Meteor That Smashed Into Family's Driveway
READ MORE STORIES ABOUT / Hard Science
Keep up.
Subscribe to our daily newsletter to keep in touch with the subjects shaping our future.
+Social+Newsletter
TopicsAbout UsContact Us
Copyright ©, Camden Media Inc All Rights Reserved. See our User Agreement, Privacy Policy and Data Use Policy. The material on this site may not be reproduced, distributed, transmitted, cached or otherwise used, except with prior written permission of Futurism. Articles may contain affiliate links which enable us to share in the revenue of any purchases made.
Fonts by Typekit and Monotype.