But it will still take seven years to get there. 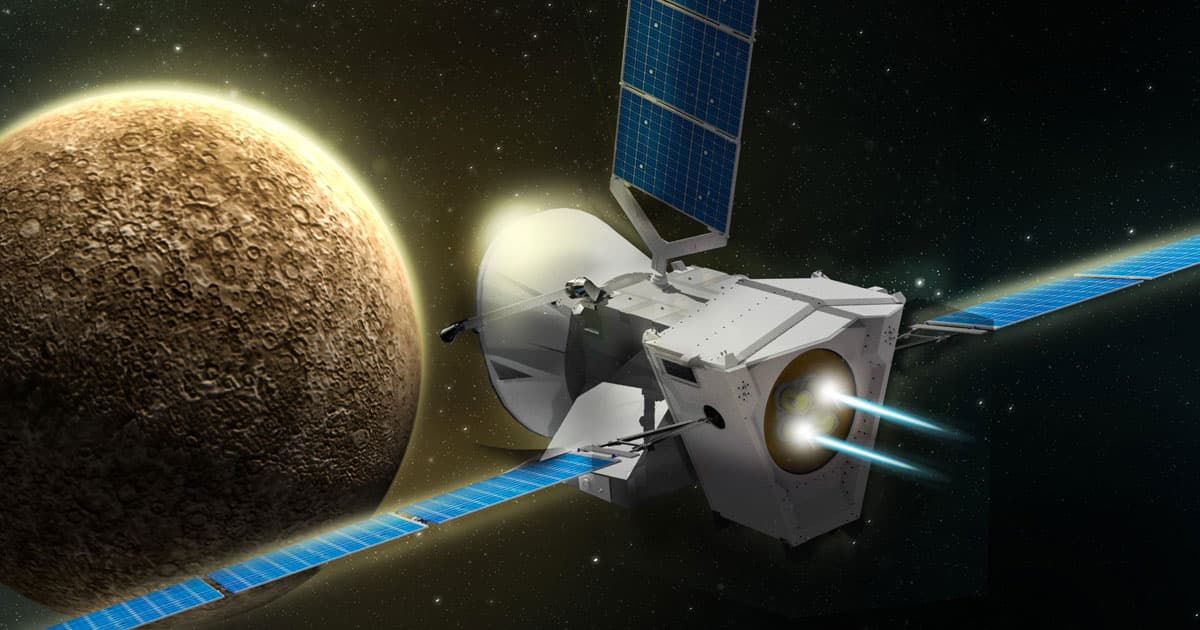 While we have yet to figure out how to travel by warp drive, we have found other ways for spacecraft to propel themselves at mind-boggling speeds across vast distances of outer space.

Ion drives, for instance, have enabled spacecraft like the NASA's Deep Space 1 and Dawn to travel years at a time at record-breaking speeds. And now, a European-Japanese mission is ready to fire up the most powerful ion thrusters yet on its long journey to Mercury after successfully making its first maneuver in space.

The BepiColombo mission that launched from Earth on October 19 wants to send a carrier spacecraft, and two piggybacking orbiters, to Mercury — a journey of 5.6 billion miles (9 billion kilometers) that will include nine flybys of Earth, Venus and Mercury, and 18 loops around the Sun to gain momentum.

The spacecraft will take seven long years to get there, despite its pair of extremely powerful ion thrusters — the most powerful ever built.

Ion thrusters use positively charged ions — from particles of an on-board fuel source like xenon gas — to create thrust. Particles get charged with electricity, usually provided by solar arrays, and then shot out the back like a cannon.

To put the spacecraft's ion thruster's force into perspective, a statement by the ESA compared full throttle from one of its two thrusters to the force of "holding an AAA battery at sea level."

Yes, that sounds weak. But it'll be burning its ion thrusters for long stretches at a time — a series of 22 long burns, each lasting up to two months. The first burn is planned to start mid-December.

Because after all, slow and steady wins the race.

READ MORE: The Most Powerful Ion Drive in Space Is Ready for Its Visit to Mercury [Space.com]

Read This Next
Mars Rock Blues
Mars Rock Samples Probably Won't Infect Earth With Deadly Martian Plague, Scientist Says
RIP
Unfortunate Comet Flies Too Close to the Sun, Disintegrates and Becomes a Ghost
Three for Three
Europe Is Also Sending a Spacecraft to Explore Venus, a Blazing Hellhole
Electric Thrust
China's New Space Station Is Powered by Ion Thrusters
Pee Your Pants in Space
Scientists Are Trying to Make Spacesuit Underwear Less Putrid
More on Off World
Drama Bomb
Wednesday on the byte
European Space Agency Halts Plans to Send Astronauts to Chinese Space Station
Futurism
Wednesday on the byte
Asteroid Mining Startup About to Launch First Mission
Carry On, Wayward...
Wednesday on the byte
NASA Says Lucy Spacecraft Will Forge Ahead With Busted Solar Array
READ MORE STORIES ABOUT / Off World
Keep up.
Subscribe to our daily newsletter to keep in touch with the subjects shaping our future.
+Social+Newsletter
TopicsAbout UsContact Us
Copyright ©, Camden Media Inc All Rights Reserved. See our User Agreement, Privacy Policy and Data Use Policy. The material on this site may not be reproduced, distributed, transmitted, cached or otherwise used, except with prior written permission of Futurism. Articles may contain affiliate links which enable us to share in the revenue of any purchases made.
Fonts by Typekit and Monotype.