Meet Pentecopterus, the Newly-discovered Monster of the Ancient Seas 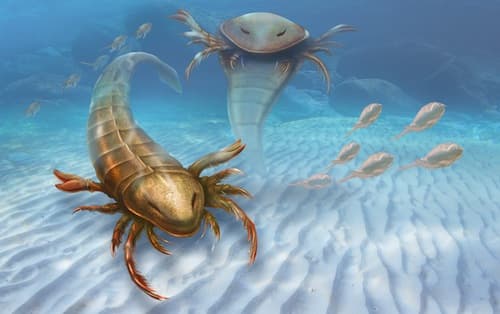 Long ago -- indeed, 460 million years ago -- Iowa was covered with shallow seas. Shrimp-like creatures, jawless fish, and small horseshoe crabs all thrived in its brackish waters. And researchers now believe that a six-foot beast lurked within its depths.

Meet Pentecopterus, the newly-discovered monster of the ancient seas.

The Predator Is Long, Slender and Fierce

The new species -- the oldest and largest known species of sea scorpion -- appears to have been perfectly outfitted to patrol the prehistoric seas. Able to grow some 1.8 meters, it's narrow body is reminiscent of a belligerent Greek warship known as a penteconter (hence the Pentecopterus name).

The creature's grasping limbs suggest that it could expertly reach out to seize prey. Perhaps it feasted on conodonts, meter-long eel-like creatures which were also plentiful in these ancient seas. And its rearmost limbs were outfitted with paddles, presumably to help it swim or dig.

How Far Would You Go For A Fossil?

Generally speaking, geologists flock to rocky outcrops like children to an ice cream truck. And this story is no exception. In this case, researchers from the Iowa Geological Survey had their eye on an impact crater in northeast Iowa - the Decorah Crater. Formed from the impact of a 200-meter wide meteorite some 470 million years ago, the crater offers a glimpse into the past.

But there was just one problem - the geologic site within the crater was covered by a river.

The solution? Why, dam the river, of course. In 2010, the Upper Iowa River was temporarily dammed and numerous fossils were unearthed. Included in the take, were 150 fossil fragments of adult and juvenile Pentecopterus specimens - and well-preserved specimens at that.

Lamsdell was called in to analyze the fossils after they were recovered, and was amazed. "Perhaps most surprising is the fantastic way it is preserved - the exoskeleton is compressed on the rock but can be peeled off and studied under a microscope. This shows an amazing amount of detail, such as the patterns of small hairs on the legs. At times it seems like you are studying the shed skin of a modern animal - an incredibly exciting opportunity for any paleontologist."

So, why were there so many specimens in this one area? The study authors think that the sea scorpions sought out the shelter of the crater so that they could molt - or shed their outer layer. Indeed, other scientists have found accumulations of such molted layers in similar marine environments.

Regardless, this is an extraordinary discovery. According to Lamsdell, the sea scorpions - or eurypterids - are now known to have evolved 10 million years earlier than previously thought. "And the relationship of the new animal to other eurypterids shows that they must have been very diverse during this early time of their evolution, even though they are very rare in the fossil record."