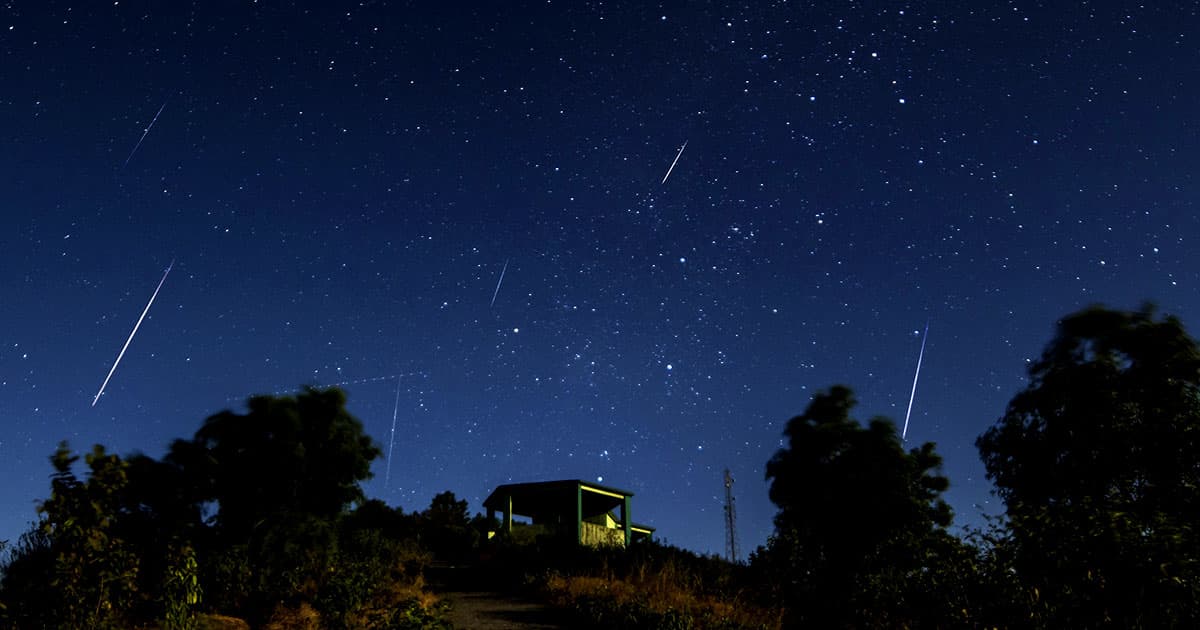 A Japanese company called Astro Live Experiences is about to launch a satellite that it will use to generate the first-ever artificial meteor shower.

The satellite is an experimental prototype that the company hopes will help it prepare for its first full "Sky Canvas" show near Hiroshima in 2020. It's loaded with thousands of tiny pellets that will catch fire as they descend through the atmosphere, leaving long, glowing trails that resemble shooting stars, according to CNET.

According to the company, each centimeter-wide pellet will combust as it re-enters the atmosphere. From the ground, the plan is that it'll look like a shooting star that burns brighter and lasts longer than the real thing. Astro Live Experiences claims that the pellets will totally disintegrate, though scientists told BuzzFeed News early last year that there would be some risk of the pellets colliding with other satellites.

Risks aside, this prototype and next year's Sky Canvas show demonstrate that performance art has breached the final frontier. Whether you're a kid wishing on a star or a young lover enjoying a romantic evening, is there anything more beautiful and awe-inspiring than seeing a tech startup's space garbage illuminating the night sky?

"I hope that our man-made meteors will help reveal new discoveries in science, and that it will gather and entertain people under the night sky," Astro Live Experiences CEO Lena Okajima said in a recent press release.

It's unclear exactly how a Sky Canvas show will contribute to science, but we decided to fathom a guess.

Hypothesis: If a tech startup fills the sky with flammable garbage, a bunch of tech blogs will groan in unison.

Those results are good enough to publish.

Editor’s Note 1/17 at 5:37 PM ET: This article has been updated to when the satellite will launch.

Read This Next
Monkey Business
China Plans to Send Monkeys to Space Station to Have Sex With Each Other
Overview Effect
William Shatner Says His Space Trip Left Him With a Feeling of Terrible Grief
Space Billboards
Russian Scientists Propose Plan to Launch Huge Advertisements Into Orbit Over Cities
Sabers Rattled
Russia Issues Veiled Threat to Shoot Down Pesky SpaceX Satellites
Astronaut Drip
We Just Got the First Peek at NASA's Artemis Moon Landing Suits
More on Off World
Killernova
Yesterday on the byte
Scientists Find "One in Ten Billion" Star System Primed to Explode in Titanic Kilonova
Lonely Planet
Feb 5 on futurism
Scientists Find Nearby Planet the Same Size of Earth, Plan to Search It for Life
Take Cover
Feb 4 on the byte
Space Startup Blows Up Another Giant Inflatable Space Station Module
READ MORE STORIES ABOUT / Off World
Keep up.
Subscribe to our daily newsletter to keep in touch with the subjects shaping our future.
+Social+Newsletter
TopicsAbout UsContact Us
Copyright ©, Camden Media Inc All Rights Reserved. See our User Agreement, Privacy Policy and Data Use Policy. The material on this site may not be reproduced, distributed, transmitted, cached or otherwise used, except with prior written permission of Futurism. Articles may contain affiliate links which enable us to share in the revenue of any purchases made.
Fonts by Typekit and Monotype.