"We're going to be farming and going seed to sole." 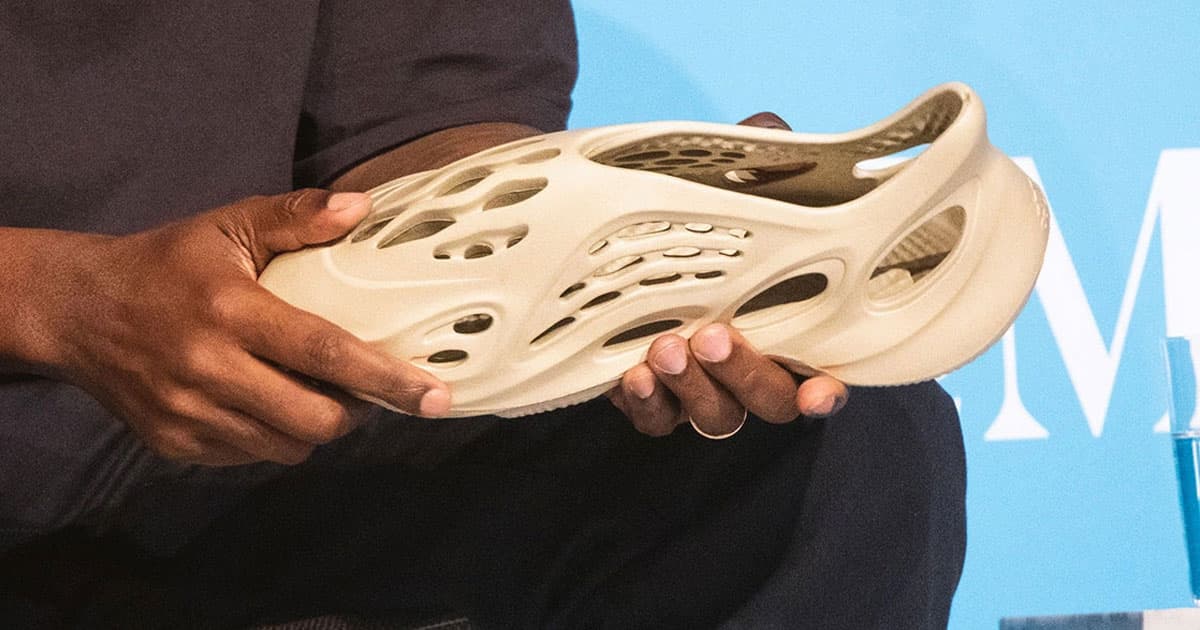 While on stage at the Fast Company Innovation Festival on Thursday, Kanye West shared a new shoe prototype from his Yeezy fashion line — and the kicks contain environmentally friendly algae.

"Eco-concerns are intersecting with what we do," Steven Smith, the head designer at Yeezy, said from the stage. "This is just the beginning of the future that Kanye envisioned for us to start working on."

The sneaker prototype was manufactured in Atlanta from a combination of petroleum-based ethylene-vinyl acetate and foam produced from algae. West told the audience that the new Yeezy headquarters in Cody, Wyoming, will include a hydroponic farm where the company can grow its own algae.

"We're going to be farming and going seed to sole," West said.

According to a Thursday tweet from the official Yeezy Twitter account, the shoes are Yeezy Foam Runners, a style first unveiled in September and set for a 2020 release.

It's not yet clear whether all Yeezy Foam Runners will be made with algae or if the algae shoes will be a subset of the line. But either way, the eco-friendly sneakers will be available in early 2020 for $75, according to the tweet.

The prototype pair West showed off on Thursday were a bland khaki color, but he said the company is looking into environmentally friendly dyes. Regardless of color, though, the Croc-esque style of the sneakers might not appeal to everyone — though the emphasis on using eco-friendly materials in fashion probably should.

The fashion industry pumps millions of tons of carbon into the atmosphere every year, while many of the chemicals and dyes used during manufacturing end up polluting Earth's waterways.

By switching to more eco-friendly materials and processes, players in the fashion industry can do their part to stop this harm from befalling the planet — one ugly sneaker at a time.

More on sustainable fashion: Seaweed Sneakers Look Fly, Could Help Save the Environment

Read This Next
Futurism
Kanye West Has an Incredible Custom Tesla, of Course, and This Is What It Looks Like
Futurism
Genetically Modified Algae Could Be Key to Tomorrow's Bio Solar Cells
Futurism
One of the World's Largest Oil Companies is Spending $1 Billion a Year on Green Energy Research
More on Earth & Energy
Choked Out
Yesterday on the byte
Entire Island Strangled by Choking Vines
Hot Take
Monday on the byte
The World's Largest Volcano Is Erupting for the First Time in Nearly 40 Years
Sun Shield
Nov 23 on futurism
Scientists Increasingly Calling to Dim the Sun
READ MORE STORIES ABOUT / Earth & Energy
Keep up.
Subscribe to our daily newsletter to keep in touch with the subjects shaping our future.
+Social+Newsletter
TopicsAbout UsContact Us
Copyright ©, Camden Media Inc All Rights Reserved. See our User Agreement, Privacy Policy and Data Use Policy. The material on this site may not be reproduced, distributed, transmitted, cached or otherwise used, except with prior written permission of Futurism. Articles may contain affiliate links which enable us to share in the revenue of any purchases made.
Fonts by Typekit and Monotype.