Oh, Say Can You See These Amazing 4th of July Sales

Save big on pressure cookers, TVs, and everything in between. 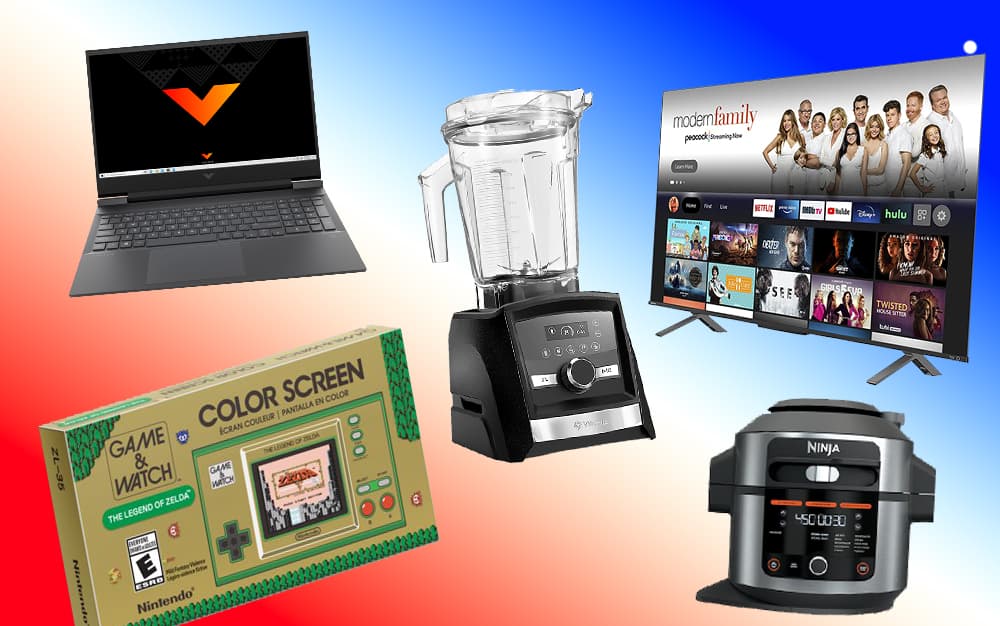 America is celebrating yet another birthday, which means one thing: a massive onslaught of big discounts on home goods, electronics, and lots more. Between hanging out with friends and family, lighting cool fireworks, housing piles of grilled meat, and reflecting on the country’s history, don’t forget to score these deals that are only available for a limited time. Here’s a selection of the best July 4th deals available for the long weekend.

The latest Alexa-ready Toshiba TVs are no joke when it comes to picture quality. Whether you’re streaming Netflix or watching the big game, everything will come in crisp, clear, and in full 4K. A wider color gamut compared to lesser 4K televisions means whatever you watch will feel practically life-like, with some seriously unmatched brightness and vibrancy. There’s even a low-latency mode to bump up the refresh rate making it perfect for next-gen gaming. Best of all, its voice-controlled backend turns Amazon Alexa into your personal streaming concierge. The television is available in 55-, 65-, and 75-inch sizes, and they’re all on sale for the holiday weekend.

Vitamix blenders are so powerful, that there’s practically nothing they won’t completely pulverize. Whole fruits and vegetables don’t just blend, they liquefy after taking a quick spin in these powerful blenders. But that’s just the beginning of the culinary possibilities here. The Ascent Series can knead pizza dough, grind grains into flour, and turn even chunky ice into powder snow. It’s pricey, but it may also be the last blender you’ll ever buy, and you can save almost $100 on it this weekend.

Gaming in the past just hit different. Before Nintendo conquered the world with the NES, its bread and butter was simple LCD games called “Game and Watch.” “Game & Watch: The Legend of Zelda” contains a very simple version of the classic Vermin, as well as three classic Zelda titles including Link’s "Awakening, Zelda II: The Adventure of Link," and the original that started it all. It’s not just a handy, sleek little portable system, it’s a piece of gaming history. It may be an unreasonable splurge at $59, but it’s an absolute steal at $39.

Read This Next
From the Dept. of Buying Things
Review: The EF ECOFLOW Delta Max Solar Panel Bundle is Portable, Powerful, and Sustainable
FROM THE DEPT. OF THINGS TO BUY
Go the Distance With This Eco-Friendly Running Gear
FROM THE DEPT. OF THINGS TO BUY
Review: Masterbuilt Gravity Series 800 is a Force of Nature
FROM THE DEPT. OF THINGS TO BUY
Save $60 on Brydge's Stellar iPad Pro Keyboard
FROM THE DEPT. OF THINGS TO BUY
5 Nintendo Space Games That Are Out of This World
More on Sci-Fi Visions
In Roomba We Do N...
6:30 PM on the byte
Report: Amazon Bought Roomba to Better Creep on Your Home
Robinhoodies
Aug 3 on the byte
Robinhood Laying Off Almost a Quarter of Its Workforce
Let's Not
Aug 3 on the byte
Airbnb Apologizes After Allowing Listing for "1830s Slave Cabin"
READ MORE STORIES ABOUT / Sci-Fi Visions
Keep up.
Subscribe to our daily newsletter to keep in touch with the subjects shaping our future.
+Social+Newsletter
TopicsAbout UsContact Us
Copyright ©, Camden Media Inc All Rights Reserved. See our User Agreement, Privacy Policy and Data Use Policy. The material on this site may not be reproduced, distributed, transmitted, cached or otherwise used, except with prior written permission of Futurism. Fonts by Typekit and Monotype.