Are Humans The Only Species Capable of Morality? 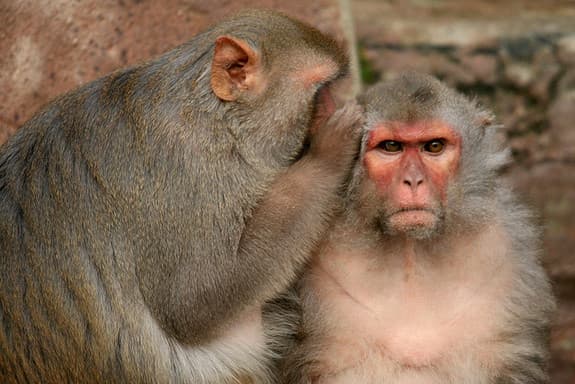 Many people argue that humans are the only ones who are capable of morality. However, a number of scientists have conducted studies investigating the truth of these claims, and they assert the exact opposite. Dr. de Waal, director of the Living Links Center at Emory University, argues that all social animals (animals that tend to congregate and live in groups) have had to modify their behavior in a number of ways in order to survive and thrive. He goes on to assert that the basic principles that guide these behaviors are the roots of human morality. He also asserts that other species can recognize when the code isn't being followed. In short, they can recognize when things aren't fair.

The overall argument is that our own ethical code evolved from the constraints that were adopted by our ancestors so that they could function in society. And ultimately, if morality grew out of behavioral rules that were shaped by evolutionary necessity, then it is biologists, not philosophers or theologians, who can, perhaps, offer us the best insight into what the rules are and why.

Of course, not all philosophers are concerned by these assertions. Nor should they be. Although our earliest behaviors may have been driven by necessity, we have reached a level of self awareness that allows us to make decisions and develop our own ethical codes—our morality now seems to be driven more by culture than evolution. Thus, when looking at morality, at the very least, philosophy and evolutionary biology should be brought into conversation with one another.

Dr. Philip Kitcher, a philosopher at Columbia University, likes Dr. de Waal’s approach. “I have no doubt there are patterns of behavior we share with our primate relatives that are relevant to our ethical decisions,” he said. “Philosophers have always been beguiled by the dream of a system of ethics which is complete and finished, like mathematics. I don’t think it’s like that at all.” In short, morality is a mess of genetics and culture. It is not something that can be understood simply by conducting interviews or studies on humans.

We need to look at other species as well.

Of course, some take issue with this notion, such as Jesse Prinz, a philosopher at the University of North Carolina. He believes morality developed after human evolution was "finished" and that moral sentiments are shaped by culture, not genetics. “It would be a fallacy to assume a single true morality could be identified by what we do instinctively, rather than by what we ought to do,” he said. “One of the principles that might guide a single true morality might be recognition of equal dignity for all human beings, and that seems to be unprecedented in the animal world.”

Yet, this is a bit of a problem for several reasons. First, when talking about morality, there is no "single true morality" because morality is not objective. It varies from culture to culture (and species to species). And as Dr. de Waal notes, there is no clear distinction between what we "ought" to do because it is "moral" and what we do because it is beneficial: “Animals do have ‘oughts.’ If a juvenile is in a fight, the mother must get up and defend her. Or in food sharing, animals do put pressure on each other, which is the first kind of ‘ought’ situation.” But really, who can say if the response comes because it is "right"--because it is what one "ought" to do-- or because it is productive for the group as a whole? And is such questioning just nitpicking?

Leave your thoughts, and learn more in the video below.

Read This Next
Sundowned
Mexico Bans Startup From Future Solar Geoengineering Experiments
Knew It All Along
Exxon Scientists Knew About Global Warming for Decades While Company Denied It
Solar Slay
Solar Powered Machine Turns CO2 and Waste Plastic Into Valuable Fuel
Dim Sun for Breakfast
Startup Says It's Started Releasing Chemical Into Atmosphere to Dim Sun
Hidden City
NYC's Greenery Eats Up All the CO2 From Its Cars, Trucks and Buses "And Then Some"
More on Earth & Energy
Save Yourselves
6:25 PM on the byte
Furious Marsupial So Thirsty For Sex That It’s Dying, Scientists Warn
Stem Ware
Friday on the byte
Scientists Discover World's Oldest Preserved Vertebrate Brain
From Bad to Worse
Thursday on the byte
Global Warming Is Worse Than We Thought, AI Tells Scientists
READ MORE STORIES ABOUT / Earth & Energy
Keep up.
Subscribe to our daily newsletter to keep in touch with the subjects shaping our future.
+Social+Newsletter
TopicsAbout UsContact Us
Copyright ©, Camden Media Inc All Rights Reserved. See our User Agreement, Privacy Policy and Data Use Policy. The material on this site may not be reproduced, distributed, transmitted, cached or otherwise used, except with prior written permission of Futurism. Articles may contain affiliate links which enable us to share in the revenue of any purchases made.
Fonts by Typekit and Monotype.