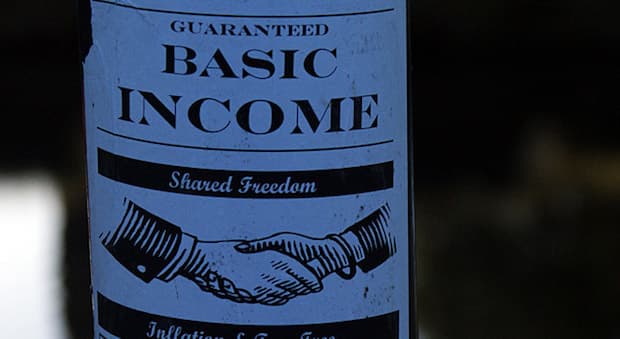 Basic Income Action claims that it is the first national organization in the United States to push for a universal basic income. The UBI is a concept that would give a certain amount of money to all of a country's citizens regardless of whether they qualify for welfare or other means-tested entitlements. The lobby plans to borrow campaigning techniques from marriage equality and cannabis legalization to put on events in DC, New York, Massachusetts, Minnesota, Louisiana, Oregon, Washington, and California.

The idea behind a UBI is old but has gained credibility in recent years as anxiety about automation brings into question whether there will be many good jobs in sectors like manufacturing in the coming years. Citibank's chief economist even seriously considered the idea in a recent research paper. Now that there's an actual group pushing for the idea, politicians may have to take a stance on what they think about the UBI.

Read This Next
From the Dept. of Things to Buy
Amazon Just Announced Its First “Early Access Sale” — Here’s What You Need to Know
From the Dept. of Things to Buy
Save $62 on an Xbox Series X ‘Gears 5’ Bundle
Roid Rage
Steroid Use Linked to a Bunch of Very Bad Brain Problems
Recipe For Disaster
FDA Warns Americans to Stop Cooking Chicken in NyQuil
From the Dept. of Things to Buy
I Reversed Years of Heat Damage with the Shark FlexStyle Air Styling and Drying System
More on Sci-Fi Visions
Intern Return
7:32 PM on the byte
Oops! Facebook Tells Interns It Already Hired That It Can't Afford Them Anymore
Cool MMArk
Yesterday on the byte
Mark Zuckerberg's Wife Looks Absolutely Horrified by His New Hobby
Star Yard
Yesterday on the byte
Huge Graveyard of Stars Surrounds Our Galaxy, Scientists Say
READ MORE STORIES ABOUT / Sci-Fi Visions
Keep up.
Subscribe to our daily newsletter to keep in touch with the subjects shaping our future.
+Social+Newsletter
TopicsAbout UsContact Us
Copyright ©, Camden Media Inc All Rights Reserved. See our User Agreement, Privacy Policy and Data Use Policy. The material on this site may not be reproduced, distributed, transmitted, cached or otherwise used, except with prior written permission of Futurism. Articles may contain affiliate links which enable us to share in the revenue of any purchases made.
Fonts by Typekit and Monotype.