It lights up the room while it plays your favorite tunes. 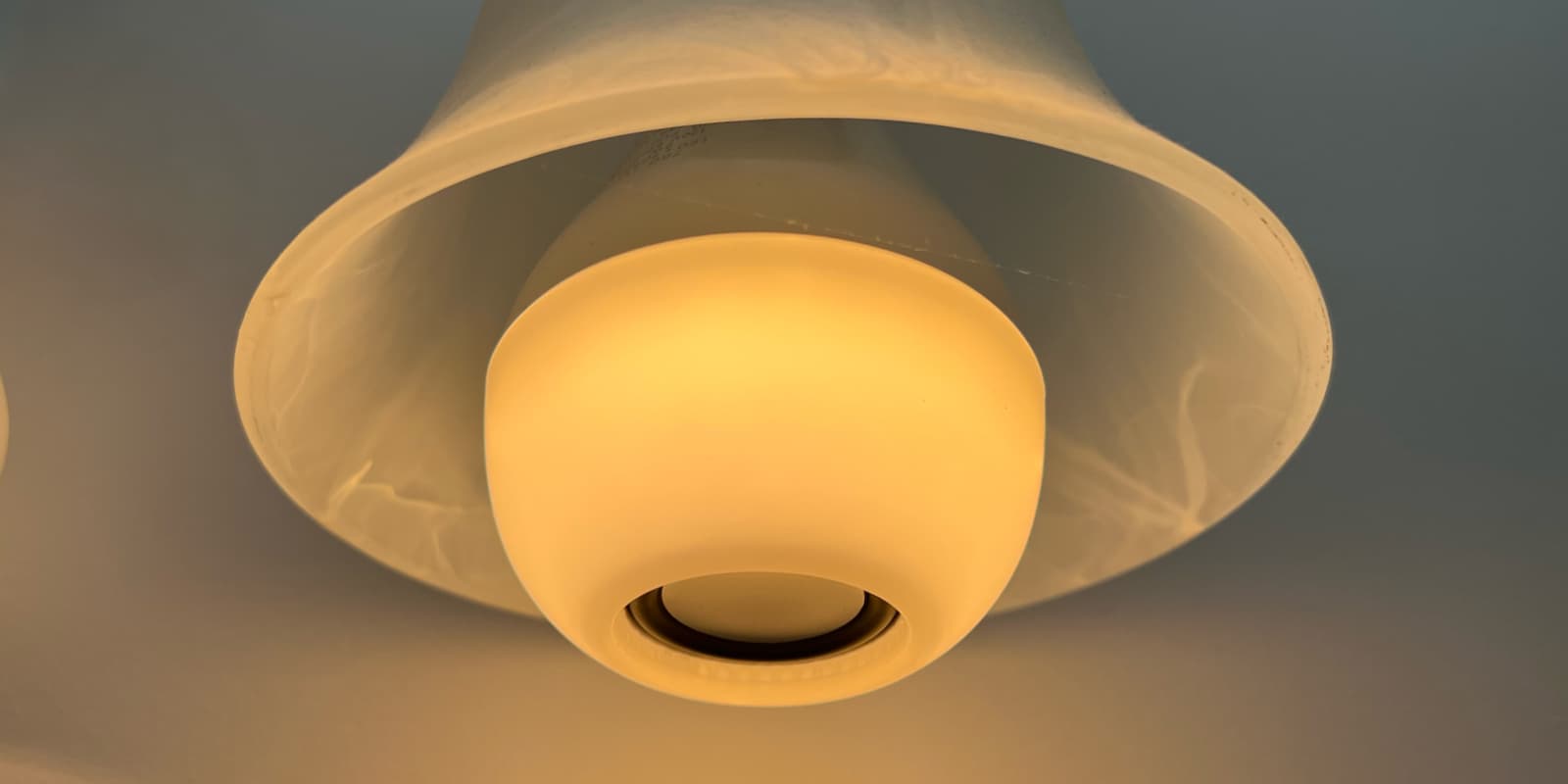 When you think of iconic duos throughout history, a few immediately come to mind: Mario and Luigi, Bonnie and Clyde, Batman and Robin, and Bluetooth speakers and smart light bulbs. If that last pairing seems out of place, you probably haven't heard about GE's LED+ Speaker. Let's cut to the chase. This is a $28 smart lightbulb with a Bluetooth speaker inside, and while the combination might seem odd at first, it works remarkably well. Somehow, GE managed to make a light bulb that costs under $30, but sounds better than most standalone Bluetooth speakers that cost upwards of $50. Read on for our full GE LED+ Light Bulb Speaker Review.

Smart light bulbs have been a popular tech accessory for years because they solve legitimate problems, like checking to see if you left a light on when you’ve left the house, dimming your room’s lighting if you don’t have a dimmer switch, and setting your lights on a timer. Companies like Philips, TP-Link, and even Amazon have released smart light bulbs with fun features, like the ability to change their color, but GE is the first to combine illumination with audio.

The GE LED+ Speaker Actually Makes a Lot of Sense

The pairing of a light bulb and speaker may seem strange, but it actually makes a lot of sense in some circumstances. You never have to worry about misplacing the LED+ Speaker or figure out if it’s charged, which are common issues with Bluetooth speakers. If you install the light bulb in your bathroom — as I have for this GE LED+ Light Bulb Speaker review — you don’t have to be concerned about getting it wet while you listen to tunes in the shower.

The LED+ Speaker’s marquee feature is one that’s unavailable on popular smart color-changing light bulbs, and I have to applaud GE's audaciousness to design it. (There’s also a color version available.) I was even more impressed that the company was able to release a smart light bulb and speaker combo without charging an inflated price. It’s true that you can get a four-pack of TP-Link’s smart light bulbs for the same price as the LED+ Speaker, but $30 is a reasonable price in both cases. Plus, TP-Link’s smart light bulbs can’t play Billy Cadden’s “Alligator” while brushing your teeth.

The LED+ Speaker is Bigger Than Other Smart Light Bulbs

I have to admit that a big part of my interest in testing the LED+ Speaker was genuine curiosity about whether GE could pull off a two-in-one gadget without making big compromises. It turns out my initial trepidation was misguided. The LED+ Speaker is a lot taller and wider than your typical light bulb, but screws into a standard light fixture without the need for an adapter. It can look a little awkward if you’re installing it in a light arrangement with multiple bulbs, so keep that in mind. The speaker is located on top of the light bulb, so you’ll definitely see it if your light fixture’s shade isn’t big enough.

Setting up the LED+ Speaker was surprisingly easy. The light bulb entered its Bluetooth pairing mode the moment I flipped on my light switch, and my iPhone found it immediately. I didn’t need to download an app or push a button, the light bulb was ready to go within a minute of its installation. However, the lack of an app is both one of the LED+ Speaker’s greatest strengths and its biggest weakness.

The light bulb will automatically connect to your phone (convenient) but go into a pairing mode if your device isn’t around (annoying for guests). My advice is to be very mindful of where you install these light bulbs. The fact that you can’t use your phone to control the LED+ Speaker’s brightness level, or set it on a timer may be a deal breaker for some, but I feel it’s worth the tradeoff after my testing.

That’s due, in part, to the fact that LED bulbs require a lot less power than traditional incandescent ones and last a lot longer. For reference, the LED+ Speaker only requires 9 watts of power, but provides the same amount of light as a 60-watt incandescent bulb. GE says this light bulb is rated to last 25,000 hours, meaning you could theoretically keep the LED+ Speaker on 24/7 for nearly three years. The company guarantees the bulb with a five-year limited warranty. A typical 60-watt incandescent light bulb will last up to 3,000 hours and provide even less light.

The good news is that the LED+ Speaker succeeds at being both a light bulb and Bluetooth audio device. Its speaker driver doesn’t block as much light I was expecting it to — due in part to its larger size — so the room I installed it in was as bright as it was with an ordinary light bulb. As for its speaker, well, I was shocked at how good it sounded. I was especially impressed with its deep bass, which was clear without over-modulating (distorting) or overpowering the midrange and treble. I installed it in light fixtures pointing upward and downard and didn’t notice a big difference in audio quality. The acoustics of your room and the audio quality of the source material you’re playing are the most important factors in how good the LED+ Speaker sounds.

I went into my testing with the expectation of hearing a very thin, distorted sound, like a higher-end version of the speaker from a fast food drive-through, but I ended up really liking what I heard. Podcasts, comedy albums, audio from YouTube videos, and other spoken word pieces sounded great as well. The LED+ Speaker won’t replace a higher-end speaker from Sony, but it’s perfectly adequate for casual music listening. GE created a genuinely good speaker, not just a novelty.

The LED+ Speaker’s most advanced audio feature is its ability to wirelessly sync up to six light bulbs to all play the same thing simultaneously. If you hook up multiple LED+ Speakers around your house, you could have a wire-free whole home audio system without using a single outlet. If you have two of these light bulbs connected in the same room, it’ll play your audio in true stereo. This is a feature we typically see in Bluetooth speakers that cost $50 or more, and the fact that it lights your room too is a real plus.

If you can accept the LED+ Speaker’s limited smart functions, and have places in your home where you’d like to listen to music but can’t use a Bluetooth speaker, we can’t recommend it highly enough. The fact that GE designed the LED+ Speaker to detect whether multiple light bulbs are present and connect to them automatically is especially impressive.

The speaker in this light bulb is so good I could even recommend picking up one or two and only installing them in common areas when guests are around. You won’t have to worry about a speaker getting in the way as you enjoy music while entertaining. It’s rare that a gadget with two completely separate functions works without much friction, but GE managed to pull it off.

Read This Next
From the Dept. of Things to Buy
Amazon Just Announced Its First “Early Access Sale” — Here’s What You Need to Know
From the Dept. of Things to Buy
Save $62 on an Xbox Series X ‘Gears 5’ Bundle
From the Dept. of Things to Buy
I Reversed Years of Heat Damage with the Shark FlexStyle Air Styling and Drying System
From the Dept. of Things to Buy
Save Hundreds on the Best Desktop Gaming PCs in September
From the Dept. of Buying Things
How to Stream "Thursday Night Football" on Amazon
More on Sci-Fi Visions
Cool MMArk
Yesterday on the byte
Mark Zuckerberg's Wife Looks Absolutely Horrified by His New Hobby
Star Yard
Yesterday on the byte
Huge Graveyard of Stars Surrounds Our Galaxy, Scientists Say
Roid Rage
Sep 21 on neoscope
Steroid Use Linked to a Bunch of Very Bad Brain Problems
READ MORE STORIES ABOUT / Sci-Fi Visions
Keep up.
Subscribe to our daily newsletter to keep in touch with the subjects shaping our future.
+Social+Newsletter
TopicsAbout UsContact Us
Copyright ©, Camden Media Inc All Rights Reserved. See our User Agreement, Privacy Policy and Data Use Policy. The material on this site may not be reproduced, distributed, transmitted, cached or otherwise used, except with prior written permission of Futurism. Articles may contain affiliate links which enable us to share in the revenue of any purchases made.
Fonts by Typekit and Monotype.