Ganymede: Meet the Largest Moon in our Solar System

Could microbes thrive in its oceans? 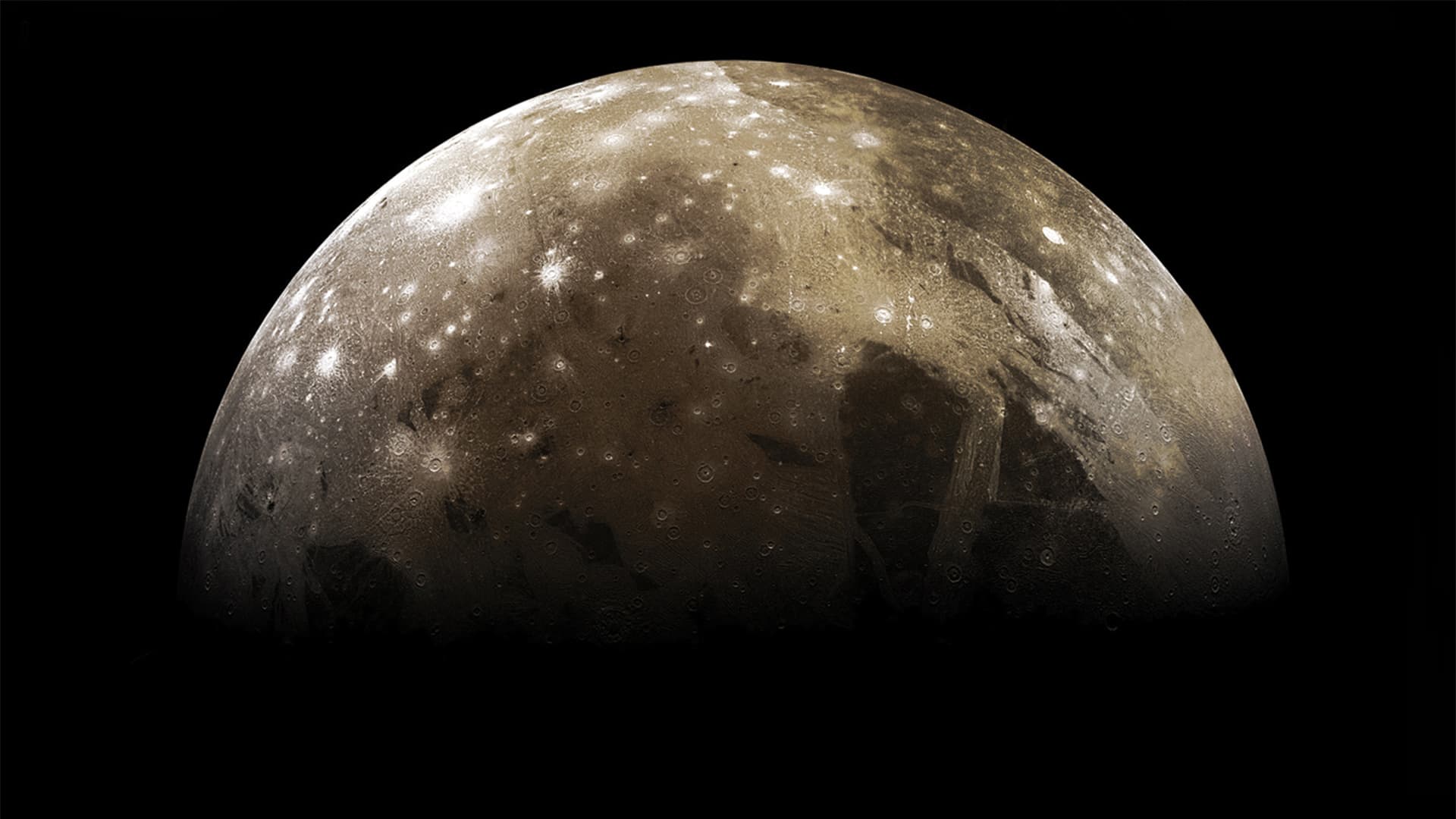 Most people who have an interest in space and astronomy know that Europa and Enceladus have subsurface oceans that could, according to exobiologists, contain alien life. Another notable moon is Io, which has volcanic plumes that shoot 400 km (about 200 miles) into space. However, most don't know all that much about Ganymede.

This is a little surprising, as Ganymede is rather sizable, and it also has an ocean - an ocean that contains more water than Earth.

That's right, Europa and Enceladus aren't the only water worlds in our neck of the woods. Our solar system's largest natural satellite is also brimming with H2O.

Ganymede is one of Jupiter's 63 moons (currently, we've discovered 181 moons in our solar system). It was discovered in January of 1610 by Galileo Galilei.

As previously mentioned, it is the largest moon in our solar system, reaching over 3,200 miles (5,200 kilometers) in diameter. For comparison, the Earth is about 7,900 miles (12,700 km) across, making Ganymede less than half the size of our planet. That may make the moon seem rather small; however, it is larger than the planet Mercury and three times larger than our own moon. Indeed, according to NASA, it is so large that, if it orbited the Sun instead of Jupiter, it would be considered a planet.

And it has a number of other claims to fame.

To begin with, Ganymede was the first moon that was discovered orbiting another planet. It also has an iron-metallic core that allows it to generate a magnetic field not unlike what we find on Earth, and an oxygen atmosphere; however, you shouldn't head there and start taking deep breaths. The atmosphere is rather tenuous in nature and also a bit insubstantial (but probably better than nothing).

Interestingly, Ganymede's day is the same length as its year, just 172 hours (7 days); however, its most interesting feature is its water.

We know about Ganymede's ocean thanks to a number of observations. First, a great portion of the moon (about 40%) is covered in craters from impacts. The rest of the surface is characterized by a grooved pattern. This is known as "sulcus." These reach thousands of miles, and the grooves can be up to a half mile (700 meters) tall.

For years, scientists believed that these structures were formed by water being released from beneath the surface in a process that is known as "tensional faulting." Then, earlier this year (March 2015), scientists determined that the moon very likely has an enormous ocean. This assessment was made possible thanks to observations of the moon's magnetic field.

To clarify, when Jupiter's magnetic field alters, so does Ganymede's; however, the researchers noticed that the aurora on the moon didn't rock as much as initially expected. By monitoring this phenomenon, researchers concluded that a subsurface ocean was likely dampening the impact that Jupiter had on Ganymede's field.

The European Space Agency is planning to send a probe called JUICE — short for JUpiter ICy moons Explorer — to Jupiter in 2022. The mission plans to explore the gas giant and the planet's largest moons: Europa, Callisto, and Ganymede. So we should have more information about this unique world in the next decade.

Hopefully, this mission will give us more information on Ganymede's water and how likely it is that microbes could thrive there. But at the present juncture, just like Europa and Enceladus, its potential for habitability is substantial (at least for small organisms).

“Every observation we make takes us one step closer to finding a truly habitable environment” says Heidi Hammel, planetary scientist at the Space Science Institute in Boulder, Colorado. And hopefully 2022 will be a magical year.

Read This Next
Moon Wrestling
The Head of NASA Is Scared Chinese Astronauts Will Seize Portions of the Moon
Next Time
NASA Cancels First Launch Attempt of Uber Expensive Moon Rocket
Back to the Moon
NASA: SpaceX Only Has to Prove It Can Land Astronauts on Moon, Not Bring Them Home Again
Moon Vacation
NASA Finds Holes on the Moon Where It's Always a Comfortable Temperature
Expect Delays
Scathing Report Admits NASA Is Years Behind Moon Landing Schedule
More on Off World
Exoplanet Dance
Yesterday on the byte
Scientist Releases Amazing Video of Exoplanets Orbiting Distant Star
Space Junk News
Yesterday on the byte
Two Large Chunks of Space Debris Just Almost Collided in an Epic Disaster
Mars Drop
Yesterday on the byte
NASA's Mars Rover Perseverance Just Dropped Off Its Last Sample
READ MORE STORIES ABOUT / Off World
Keep up.
Subscribe to our daily newsletter to keep in touch with the subjects shaping our future.
+Social+Newsletter
TopicsAbout UsContact Us
Copyright ©, Camden Media Inc All Rights Reserved. See our User Agreement, Privacy Policy and Data Use Policy. The material on this site may not be reproduced, distributed, transmitted, cached or otherwise used, except with prior written permission of Futurism. Articles may contain affiliate links which enable us to share in the revenue of any purchases made.
Fonts by Typekit and Monotype.