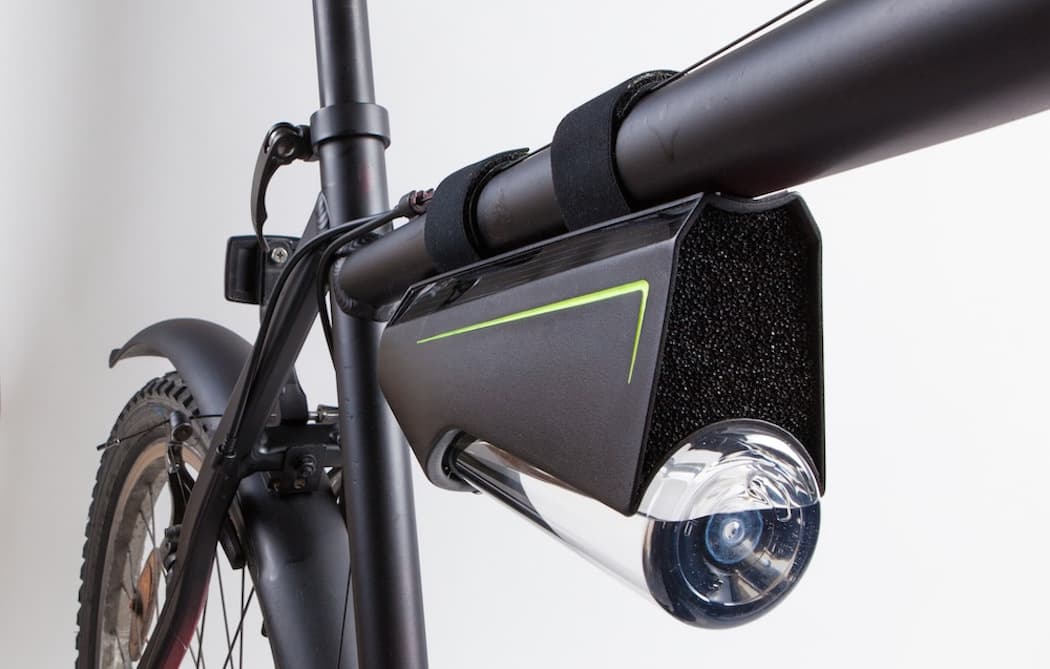 Is it possible to produce water from nothing? Almost. Kristof Retezar, a Vienna based designer has invented a device that can take humidity from the air, condense it, and produce drinkable water. Unfortunately, it can only produce a tiny amount of water in an hour. We're talking .5 liters here.

So it won't save you if you you are stranded in the desert, but it can help quench your thirst a little, and it's a neat beginning. With additional research, we may be able to turn this into some pretty cool viable tech.

Dubbed Fontus, the device can be attached to a bike, allowing cyclists to produce water over long-distance rides, particularly along the countryside where pit-stops are scarce.

It may sound like some futuristic, Star Trek device, but it really just uses the principles behind condensation to create water. Think of how, if you take something out of the refrigerator (such as a can of soda, for instance), and leave it out on the counter for some time, moisture begins to collect on its exterior because of the changes in temperature.

That's all we are really talking about here.

"This is simply condensation of the humidity that is contained in the air," Retezár told Live Science. "You always have a certain percentage of humidity in the air, it doesn't matter where you are — even in the desert. That means you would always potentially be able to extract that humidity from the air."

The device is also solar-powered and is connected to a series of hydrophobic surfaces that repel water. "Because they're hydrophobic, they immediately repel the condensed water that they created, so you get a drop flow [into the bottle]," he explained. "Basically, you're taking air in a vapor state and converting it into a liquid state."

Learn a bit more in the video below.

As mentioned, Fontus can produce .5 liters (.5 quarts) of water within an hour...and that's in ideal conditions—temperatures between 30 to 40 degrees Celsius (86 degrees and 104 degrees Fahrenheit) and humidity from anywhere between 80 to 90 percent.

The prototype has a filter at the top that keeps dust and bugs from the water, but does not (yet) come equipped with a way to filter out potentially harmful contaminants. However, unless the air is really contaminated, the water that the device can produce will be clean. And honestly, if you don't feel safe drinking from the air you're already breathing, then you might want to relocate to a different area.

"We're thinking about making a bottle that also has a carbon filter, and this one would be for cities or areas where you might think the air is contaminated. But originally, this water bottle was thought to be used in nature, and places where you wouldn't have contaminated air," Retezar adds.

Beyond athletic use, this also presents numerous possibilities for application in developing countries, where water is scarce and humidity is high.

The designer is also currently looking into launching a crowdfunding campaign in the first quarter of 2016 to cover the cost of mass producing the Fontus. Should the crowdsourcing efforts prove to be successful, the Fontus could be sold under $100 and will hopefully be available in the next nine or ten months.

Read This Next
From Our Partners
Use Natural Light To Guide Your Way With This Bio-Orb
Brands We Love
This Delicious Sparkling Water Uses Hemp and Adaptogens to Calm Your Frayed Nerves
From Our Partners
Bring Water And Snacks, And Reduce Plastic Waste, With The FLPSDE
Futurism
Get Dry Fast and Without Towels With the Viatek Body Dryer
More on Sci-Fi Visions
What is Happening
Wednesday on the byte
Elon Musk Sets His Twitter Account to Private
From the Dept. of...
Monday on futurism
The Best Humidifiers of 2023
Human v. Giraffe
Jan 24 on the byte
Chaotic Italian Fashion Line Baffles Facial Recognition Software
READ MORE STORIES ABOUT / Sci-Fi Visions
Keep up.
Subscribe to our daily newsletter to keep in touch with the subjects shaping our future.
+Social+Newsletter
TopicsAbout UsContact Us
Copyright ©, Camden Media Inc All Rights Reserved. See our User Agreement, Privacy Policy and Data Use Policy. The material on this site may not be reproduced, distributed, transmitted, cached or otherwise used, except with prior written permission of Futurism. Articles may contain affiliate links which enable us to share in the revenue of any purchases made.
Fonts by Typekit and Monotype.