We could travel through the cosmos in record time. 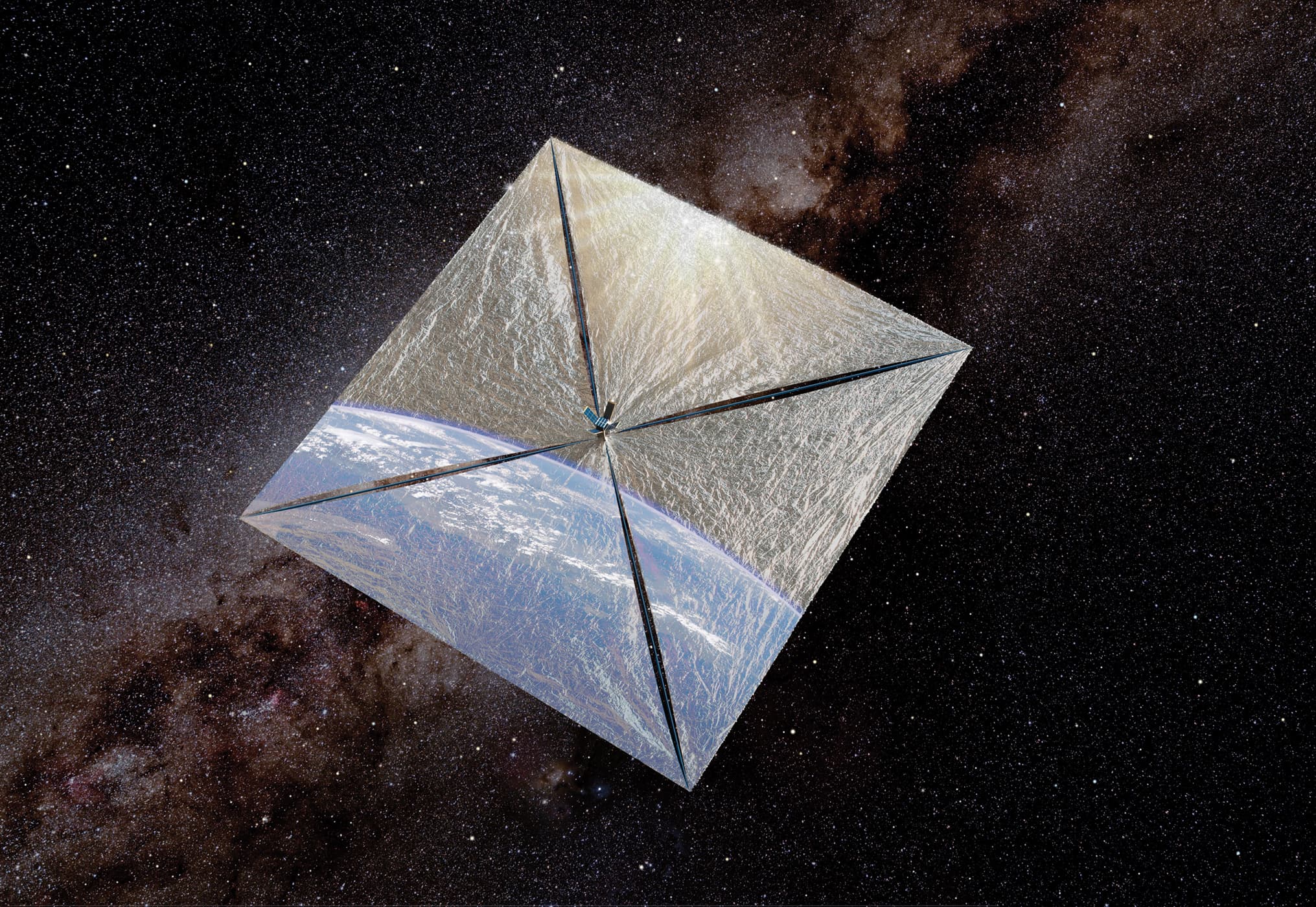 We’re all familiar with the idea of solar sails to explore the Solar System, using the light pressure from the Sun. But there’s another propulsion system that could harness the power of the Sun, electric sails, and it’s a pretty exciting idea.

A few weeks ago, I tackled a question someone had about my favorite exotic propulsion systems, and I rattled off a few ideas that I find exciting: solar sails, nuclear rockets, ion engines, etc. But there’s another propulsion system that keeps coming up, and I totally forgot to mention, but it’s one of the best ideas I’ve heard in awhile: electric sails.

As you probably know, a solar sail works by harnessing the photons of light streaming from the Sun. Although photons are massless, they do have momentum, and can transfer it when they bounce off a reflective surface.

In addition to light, the Sun is also blowing off a steady stream of charged particles – the solar wind. A team of engineers from Finland, led by Dr. Pekka Janhunen, has proposed building an electric sail that will use these particles to carry spacecraft out into the Solar System.

To understand how this works, I’ll need to jam a few concepts into your brain.

First, the Sun. That deadly ball of radiation in the sky. As you probably know, there’s a steady stream of charged particles, mainly electrons and protons, zipping away from the Sun in all directions.

Astronomers aren’t entirely sure how, but some mechanism in the Sun’s corona, its upper atmosphere, accelerates these particles on an escape velocity. Their speed varies from 250 to 750 km/s.

The solar wind travels away from the Sun, and out into space. We see its effects on comets, giving them their characteristic tails, and it forms a bubble around the Solar System known as the heliosphere. This is where the solar wind from the Sun meets the collective solar winds from the other stars in the Milky Way.

The solar wind does cause a direct pressure, like an actual wind, but it’s incredibly weak, a fraction of the light pressure a solar sail experiences.

But the solar wind is negatively charged, and this is the key.

An electric sail works by reeling out an incredibly thin wire, just 25 microns thick, but 20 kilometers long. The spacecraft is equipped with solar panels and an electron gun which takes just a few hundred watts to run.

By shooting electrons off into space, the spacecraft maintains a highly positive charged state. As the negatively charged particles from the Sun encounter the positively charged tether, they “see” it a huge obstacle 100 meters across, and crash into it.

By imparting their momentum into the tether and spacecraft, the ions accelerate it away from the Sun.

The amount of acceleration is very weak, but it’s constant pressure from the Sun and can add up over a long period of time. For example, if a 1000 kg spacecraft had 100 of these wires extending out in all directions, it could receive an acceleration of 1 mm per second per second.

In the first second it travels 1 mm, and then 2 mm in the next second, etc. Over the course of a year, this spacecraft could be going 30 km/s. Just for comparison, the fastest spacecraft out there, NASA’s Voyager 1, is merely going about 17 km/s. So, much faster, definitely on an escape velocity from the Solar System.

One of the downsides of the method, actually, is that it won’t work within the Earth’s magnetosphere. So an electric sail-powered spacecraft would need to be carried by a traditional rocket away from the Earth before it could unfurl its sail and head out into deep space.

I’m sure you’re wondering if this is a one-way trip to get away from the Sun, but it’s actually not. Just like with solar sails, a electric sail can be pivoted. Depending on which side of the sail the solar wind hits, it either raises or lowers the spacecraft’s orbit from the Sun.

Strike the sail on one side and you raise its orbit to travel to the outer Solar System. But you could also strike the other side and lower its orbit, allowing it to journey down into the inner Solar System. It’s an incredibly versatile propulsion system, and the Sun does all the work.

We should find out if the technique is viable later this year.

It’s not just the Finns who are considering this propulsion system. In 2015, NASA announced that they had awarded a Phase II Innovative Advanced Concepts grant to Dr. Pekka Janhunen and his team to explore how this technology could be used to reach the outer Solar System in less time than other methods.

The Heliopause Electrostatic Rapid Transit System, or HERTS spacecraft would extend 20 of these electric tethers outward from the center, forming a huge circular electric sail to catch the solar wind. By slowly rotating the spacecraft, the centrifugal forces will stretch the tethers out into this circular shape.

With its positive charge, each tether acts like a huge barrier to the solar wind, giving the spacecraft an effective surface area of 600 square kilometers once it launches from the Earth. As it gets farther, from Earth, though, its effective area increases to the equivalent of 1,200 square km by the time it reaches Jupiter.

When a solar sail starts to lose power, an electric sail just keeps accelerating. In fact, it would keep accelerating out past the orbit of Uranus.

If the technology works out, the HERTS mission could reach the heliopause in just 10 years. It took Voyager 1 35 years to reach this distance, 121 astronomical units from the Sun.

But what about steering? By changing the voltage on each wire as the spacecraft rotates, you could have the whole sail interact differently on one side or the other to the solar wind. You could steer the whole spacecraft like the sails on a boat.

In September 2017, a team of researchers with the Finnish Meteorological Institute announced a pretty radical idea for how they might be able to use electric sails to comprehensively explore the asteroid belt.

Instead of a single spacecraft, they proposed building a fleet of 50 separate 5-kg satellites. Each one would reel out its own 20 km-long tether and catch the Sun’s solar wind. Over the course of a 3-year mission, the spacecraft would travel out to the asteroid belt, and visit several different space rocks. The full fleet would probably be able to explore 300 separate objects.

Each spacecraft would be equipped with a small telescope with only a 40 mm aperture. That’s about the size of a spotting scope, or half a pair of binoculars, but it would be enough to resolve features on the surface of an asteroid as small as 100 meters across. They’d also have an infrared spectrometer to be able to determine what minerals each asteroid is made of.

That’s a great way to find that $10 trillion asteroid made of solid platinum.

Because the spacecraft would be too small to communicate all the way back to Earth, they’d need to store the data on board, and then transmit everything once they came past our planet 3 years later.

The planetary scientists I’ve talked to love the idea of being able to survey this many different objects at the same time, and the electric sail idea is one of the most efficient methods to do it.

According to the researchers, they could do the mission for about $70 million, bringing the cost to analyze each asteroid down to about $240,000. That would be cheap compared to any other method proposed of studying asteroids.

Space exploration uses traditional chemical rockets because they’re known and reliable. Sure they have their shortcomings, but they’ve taken us across the Solar System, to billions of kilometers away from Earth.

But there are other forms of propulsion in the works, like the electric sail. And over the coming decades, we’re going to see more and more of these ideas put to the test. A fuel free propulsion system that can carry a spacecraft into the outer reaches of the Solar System? Yes please.

I’ll keep you posted when more electric sails are tested.