Early 4th of July 2022 Deals You Can Get Right Now

The best independently chosen deals we could find. 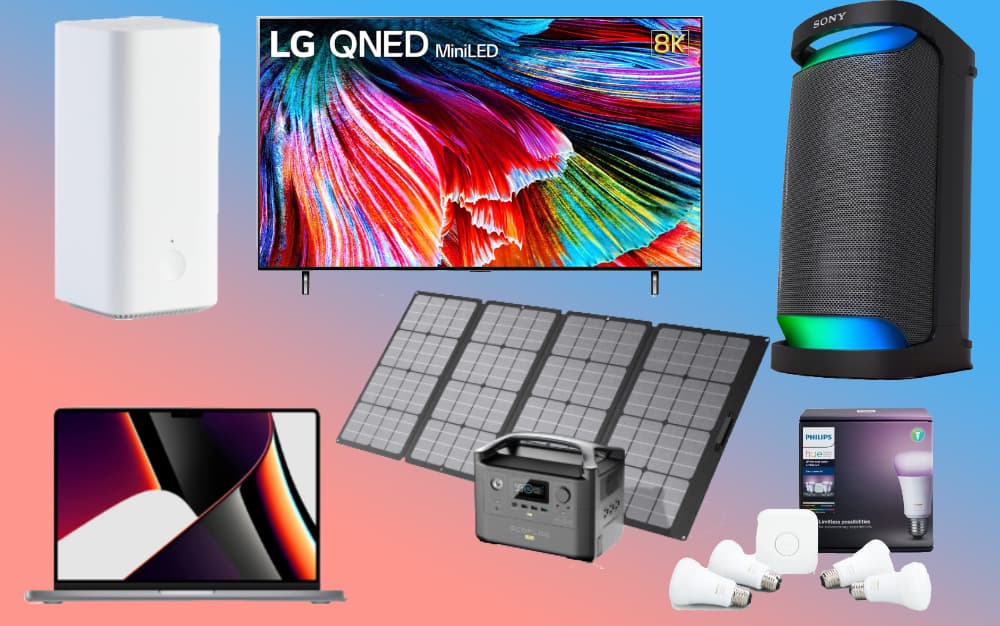 Taking advantage of the sales held during the 4th of July weekend is just one of the ways to celebrate the United States’ independence from England. While the holiday isn’t happening for a few more days, retailers have already begun discounting some of their best gear, and we’ve rounded up the top deals for your convenience.

What’s so impressive about 4th of July deals is the breadth of items that are discounted. You can score an excellent deal on everything from a phone charger to a mattress. Take a look at the deals below as you gear up for the holiday weekend, and you’re bound to find something that’s been on your wishlist for months.

Every home deserves a solid WiFi network, which is essential for school, work, streaming TV shows or movies, and playing games. Vilo is offering a three-router bundle that can cover areas up to 4,500 square feet for just $90. This is arguably the best deal in the entire home networking space. Vilo’s routers have all of the latest features, including parental controls, support for the WPA2-PSK security standard, and three Ethernet ports on each router. If you have a larger space, you can add another Vilo router for $36, which is what other companies charge for a network extender. If your home has WiFi dead zones, don’t skip this deal.

This bundle of four smart Philips Hue lightbulbs is the perfect way to start your smart home. The brightness and color of each bulb can be independently controlled from an app on your phone, and you can set them to turn on and off on a timer. Philips Hue bulbs are also compatible with Amazon’s Alexa, Apple’s HomeKit, and the Google Assistant, so you can control them hands-free using your voice. There are a lot of smart light bulbs available right now, but the ones from Philips are the most reliable ones we’ve tested.

Apple never discounts its own hardware, which is why this $200 discount on its latest 14-inch MacBook Pro is so special. The machine runs on Apple’s M1 Pro processor, which is powerful enough to handle resource-intensive tasks like 4K video editing without triggering the fans. Its 14-inch “Liquid Retina” display is sharp and color accurate, which makes it easier for professional photographers to get their work done, too. The machine we’re recommending is configured with 16GB of RAM (memory) and a 1TB SSD, which is plenty for getting all but the most demanding jobs done in no time.

The LG 65QNED99UPA is an 8K TV, which means it offers twice the resolution of the 4K TVs many of us are familiar with. This means the TV can show video in stunning detail. There isn’t a lot of native 8K content available right now (believe us, there will be), but this TV’s processor can upscale 4K video to look better than it would on a 4K TV. This TV’s ultra high resolution is what sets it apart from any other set we’ve seen, but it also has standard features like multiple HDMI ports, an operating system that supports all the major streaming apps, and a game mode to minimize lag. This is the TV of tomorrow, and it’s $1,500 off today.

Sony’s SRS-XP500 can do way more than your typical party speaker. In addition to playing music over Bluetooth, this speaker can be used as an amp, allowing you to plug in a microphone for karaoke, or an instrument for a jam session. The SRS-XP500 even has a USB port, so you can use it to charge your devices. Sony says the speaker can last up to 20 hours, which is enough time for it to be the entertainment center of your party. Finally, this speaker is water resistant enough to get splashed without being damaged. If you plan on hosting a 4th of July party, there’s still plenty of time to get this speaker.

Get A Free Gozney Pizza Oven With a $5,000 Purchase From Outer

Outer and Gozney have teamed up to offer a deal no home chef should pass up. If you spend over $5,000 on Outer’s furniture, you can get a free Gozney Pizza Oven when you use the promo code PIZZAGRAY or PIZZAGREEN at checkout. This deal saves you $500. Outer has a wide assortment of outdoor furniture, from loveseats and couches to fire pits and tables, so you should have no problem finding some pieces for your space. Better still, the company uses sustainable materials and works with organizations like 1% for the Planet to donate some of its profits to Earth-friendly initiatives.

Anyone who loves camping should take advantage of ECOFLOW’s current discount on its River Pro bundle, which pairs a 160-watt solar panel with a high-capacity power station. The solar panel can charge the power station, which has three USB-A ports, three outlets, and a DC output. ECOFLOW says its power station can fully recharge a laptop up to 10 times, and power a 150-watt refrigerator for up to eight hours. The effectiveness of the solar panel will be dependent on the strength of the sun in your area, but this bundle should be able to keep your devices charged while you spend a few days off the grid.

Casper’s Original Hybrid Mattress uses a combination of springs, memory foam, and a breathable top foam to ensure you get a good night’s sleep. The foam layers provide comfort while the spring layer is all about support. The mattress is divided into three “zones,” which accommodate the top, midsection, and bottom of your body to keep your spine in alignment. If you’ve ever woken up with a stiff back, the Original Hybrid Mattress should alleviate that issue. Casper also offers a version of this mattress that’s completely made out of foam, if you prefer. A mattress is a personal purchase, which is why you get 100 nights to try this mattress, and can choose to return it at any time during the trial.

Vitamix is one of the most trusted names in the culinary space, which is why this deal on its E310 Exploration Blender shouldn’t be missed. The blender has 10 speeds, and is powerful enough to make anything from smoothies to soups without dulling its blades. The E310’s 48-ounce container is large enough to make multiple batches of food — think pesto or a tomato sauce — to save you time during weekday cooking. It’s an investment, but the Vitamix E310 will quickly become one of your go-to kitchen gadgets.

Read This Next
From the Dept. of Buying Things
Review: The EF ECOFLOW Delta Max Solar Panel Bundle is Portable, Powerful, and Sustainable
FROM THE DEPT. OF THINGS TO BUY
Go the Distance With This Eco-Friendly Running Gear
FROM THE DEPT. OF THINGS TO BUY
Review: Masterbuilt Gravity Series 800 is a Force of Nature
FROM THE DEPT. OF THINGS TO BUY
Save $60 on Brydge's Stellar iPad Pro Keyboard
FROM THE DEPT. OF THINGS TO BUY
5 Nintendo Space Games That Are Out of This World
More on Sci-Fi Visions
In Roomba We Do N...
6:30 PM on the byte
Report: Amazon Bought Roomba to Better Creep on Your Home
Robinhoodies
Aug 3 on the byte
Robinhood Laying Off Almost a Quarter of Its Workforce
Let's Not
Aug 3 on the byte
Airbnb Apologizes After Allowing Listing for "1830s Slave Cabin"
READ MORE STORIES ABOUT / Sci-Fi Visions
Keep up.
Subscribe to our daily newsletter to keep in touch with the subjects shaping our future.
+Social+Newsletter
TopicsAbout UsContact Us
Copyright ©, Camden Media Inc All Rights Reserved. See our User Agreement, Privacy Policy and Data Use Policy. The material on this site may not be reproduced, distributed, transmitted, cached or otherwise used, except with prior written permission of Futurism. Fonts by Typekit and Monotype.