It sucks in the best possible way. 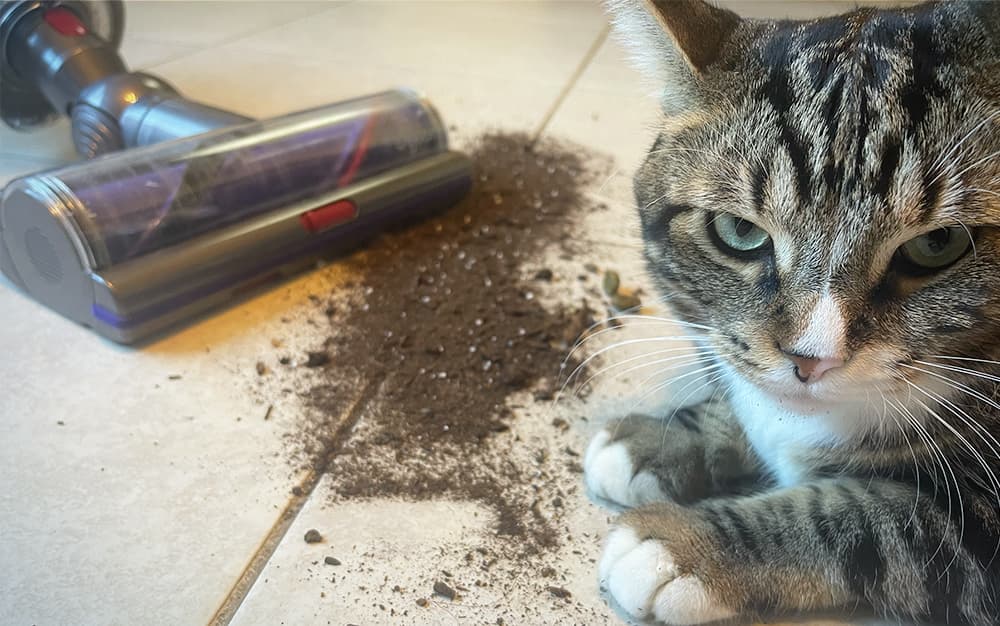 While Dyson doesn’t only make vacuums, it may be the product many consumers recognize the company by. Who can forget the classic early ‘00s commercial featuring founder John Dyson landing on the scene with his bright yellow vacuum cleaner? He opened by dragging modern vacuum engineering conventions and presenting a new device that Dyson claimed “doesn’t lose suction.” He was right, though these shiny, overly-engineered vacuums came at an astronomical cost. If they did everything they claimed to, dropping that much on a Dyson could be a worthwhile investment. This brings me to my cat, and the Dyson Cyclone V10 Animal cordless vacuum.

Henry Miller called life a “rosy crucifixion.” It’s a moniker that also applies to fatherhood. While Jodah is a miracle baby, he’s also a wicked cat who lives to give his father stress ulcers by turning our home into a dump. Luckily, the Dyson Cyclone V10 Animal cordless vacuum can sweep up whatever my heinous feline throws at me, with room to spare.

To see how the Dyson V10 Animal measured up to other vacuums in its class, this writer and his Large Adult Feline Son put the literal (and figurative) mess of their sadomasochistic, codependent relationship to the test.

What is the Dyson Cyclone V10 Animal Cordless Vacuum?

The Dyson Cyclone V10 is unboxed in two parts. The main part of the vacuum contains the battery, handle, and bin where refuse gets sucked into. Like many modern devices, this Dyson comes with a dock connected to a power supply, that way, it can charge to full after every use. The dock even has places where two of the five attachments can rest easily, three if you count the head attached to the main vacuum.

Dyson products, whether we’re talking about vacuum cleaners or desk fans, all smack of sci-fi housekeeping. Some of their products look so futuristic, it’s hard to tell what they actually are at first glance. The Dyson Cyclone V10 Animal doesn’t have the overly engineered look so ubiquitous with this company, but it does have an excellent build quality.

When my old vacuum finally decided to completely die in December of 2021, I decided to replace it with a premium model. As it turns out, Dyson made a cordless device built specifically for cleaning up after — yes — animals. Or specifically for me, and the rest of my long-suffering, animal-tethered cohort.

Distinguishing one Dyson from another can, at certain points, be a tricky game — but distinguishing the Cyclone V10 Animal is its modularity: Everything clicks into place. Literally. Removing or attaching different tools to the main body of the vacuum is done with a simple push and click of a red button. If you want to clean a desk or perhaps the inside of a vehicle, you can simply remove the long wand so getting into tighter spaces is easier. This is a very welcome feature, considering that this dreadful feline’s imagination inspires him to make messes in even the most surprising places.

Aesthetics on the Dyson Cyclone V10 Animal look sleek as hell. Under the hood, it’s powered by a Dyson Hyperdymium motor, claimed to be twice as powerful as any cordless vacuum cleaner out there. Fourteen cyclones spin particulates into the bin, which traps them, while expelling cleaned air using its filtration system. And because it’s acoustically engineered, the vacuum accomplishes this at lower decibels than a standard non-Dyson vacuum cleaner.

Dyson V10 Animal Review: Is the Cordless Vacuum Worth It?

Anytime you go for a cordless device, there’s usually a trade-off. In the case of vacuum cleaners, one must compromise power for versatility. After a little less than a month of regular usage, It’s hard to see if the Dyson Cyclone V10 Animal compromises on anything.

After charging to full power, I was eager to try out this big purchase. Left to my own devices, the floors wouldn’t be tended to until they resembled a crime scene. Granted, when it comes to my cat and his wicked ways, floors become unfathomably messy on the regular.

A minute of firing up the Dyson Cyclone V10 Animal, it’s easy to become addicted. Using it was (god help me) actually kind of fun. Previous vacuums usually didn’t get any single spots fully clean, unless it got at least a couple of run-throughs. It’s a rhythm anyone who’s operated a vacuum cleaner is all too familiar with: First pass gets the bulk of the mess, second gets the rest (if you’re lucky). With the Dyson Cyclone V10 Animal, the second run-through is no longer necessary.

The phrase “game-changer” went through my mind cleaning the living room — in record time. Oddly enough, there was some parallel thinking here. Hopping online and parsing through reviews from Amazon to Twitter, and anyone can find the exact same thought echoed: “This is a game-changer.” It’s so corny, but it’s not inaccurate.

No Task Too Small

I don’t know how, but my equal parts adorable/sinister cat managed to drag some potting soil inside and dumped it on our white living room carpet. His face? Shameless. Despite knowing how cleaning up his mess would cause his father hardship. But this mischief would be dispensed with swiftly.

With the amount of serious cooking I do, the linoleum floors in our kitchen are littered with everything from bread flour to minced shallots that just missed the pan. Recently, Jodah hopped up on a kitchen island and in a most capricious manner, knocked over a 12-ounce bag of coffee I had splurged on. While I could no longer consume the coffee, I was able to sweep up every bean easily. It’s as if his cheeky indiscretion never occurred. The broom and dustpan haven’t been touched in weeks.

Switching up different brush heads is done easily. Using the Dyson Cyclone V10 Animal along with a crevice tool to sweep up a small mess my son made in the back of our Toyota 4Runner. The backseat was littered with sand — beach sand? Playground sand? Not that it matters — as it’s been taken care of, and I didn’t even break a sweat.

While the bin is small, emptying it couldn’t be simpler. Simply point the bin in the direction of a trash can, and eject the mess. Lightly knocking the edge of the bin against the trash can also be done but likely unnecessary. The bin gives up its dusty payload pretty easily. The Animal moniker is well-earned. I realized just how much hair my execrable cat sheds on a daily basis. It’s a lot. Probably enough to make a wig or two.

The vacuum has three power settings, Auto, Eco, and Boost. Eco trades in a little suction strength to prolong battery life. When using it, a second pass is almost always needed. Not a great feature, but it may be enough for less troublesome spills. Conversely, the Boost option seemed like overkill. Auto took care of pretty much every mess we threw at it.

Unbeatable, But Not Affordable

As far as battery life goes, Dyson sports a battery life of up to 60 minutes. The companion dock is optional, but (if you had to) the vacuum is gorgeous enough to want to display for company. It’s also an easy way to remember to power up your vacuum cleaner to full when it’s not in use. Because the vacuum is so efficient, sweeping up the entirety of our 1,000-square-foot home can be done on a single charge. Of course, it’s rare that I ever vacuum my entire house at once. The Dyson Cyclone V10 Anima is mostly used in spurts, cleaning up the living room and kitchen on a near-daily basis. That, and anytime my ill-bred laddie decides he wants to try his father’s patience by making our home look like the sight of a nuclear accident.

What is perhaps the most impressive aspect of the Dyson Cyclone V10 Animal is the fact that it’s so quiet. No, it doesn’t exactly run silent, but it’s low enough that it might trick you into thinking that it’s broken or clogged. While the vacuum operates at much lower decibels than most, it’s still likely too loud to run after bedtime. If there’s a gripe to be had with this device it would be the price, which like many Dyson products, is astronomical. It set me back $538, after taxes. In fact, it costs more than every single vacuum I’ve ever purchased…combined.

The Dyson Cyclone V10 Animal Cordless Vacuum does everything it claims to do. It sweeps up even the most dastardly mess the youth of today create, and it does it with ease. While I stop short of calling it “fun,” this cord-free vacuum works just the way you want it to, cutting down on the dread that this household chore usually brings. Floors in my home remain pristine not because I’m a clean freak, but because maintaining this state of cleanliness is easily accomplished. Because of this, my cat's transgressions are quickly escalating. When I’m not paying attention, my peccable niño borrows his father’s phone and sends uncouth messages to singles in my area. He’s stolen my credit card info and uses it to buy catnip. Who knows how deep his naughtiness will go, but at the very least, I can rest easy knowing that all floor-related situations will be dealt with briskly, thanks to the Dyson Cyclone V10 Animal Cordless Vacuum.