Colorful Slug May Be the Most Adorable Creature on Earth

It's tiny, it's green, and it's just the cutest thing you've ever seen. 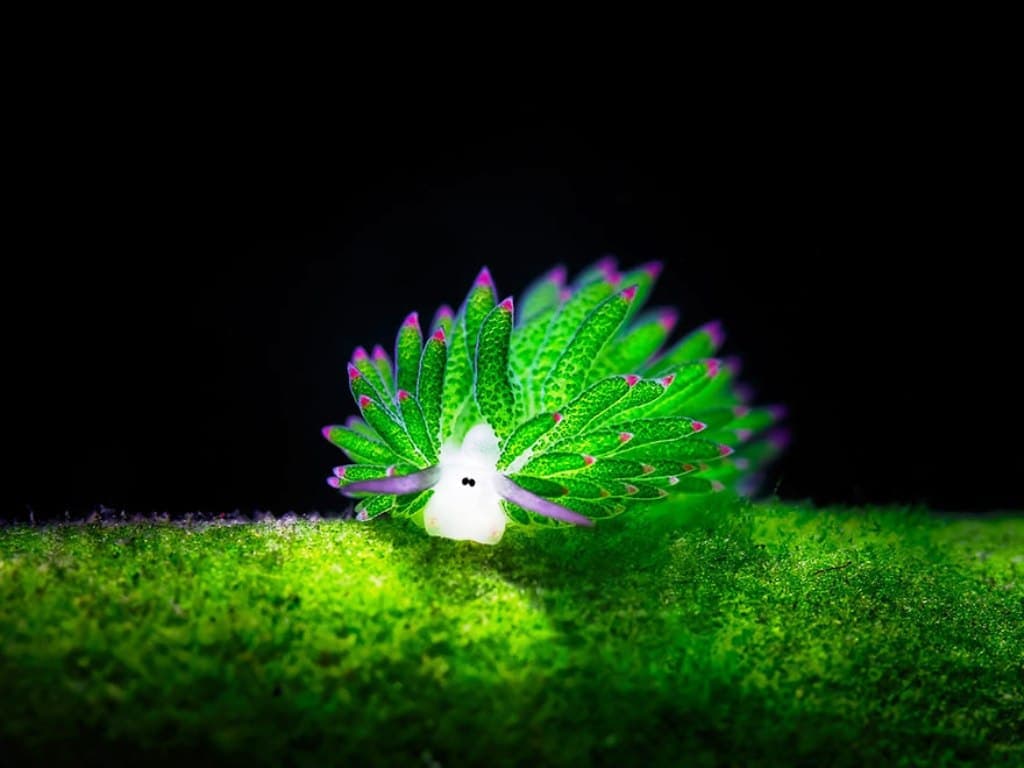 In a creature that looks like it was pulled straight from a Pixar film, a series of new images reveal a small, elusive creature that hangs out on the ocean floors in select locations. Called Costasiella kuroshimae—less formally "Leaf Sheep" or "Costasiella"—the slug has since been dubbed the cutest marine creature in the world.

Its cute features may set it apart from some of the more horrific living creatures patrolling our oceans, but they serve an important purpose. For instance, the colorful spike-like formations on its back are used to help the creature camouflage itself from potential predators—allowing it blend in no matter the environment.

Moreover, the 0.2-inch (5-mm) creature has fascinating eating habits. When it isn't gorging on moss, it can derive energy from sunlight—a process called photosynthesis—kind of like plants. It's hardly the only creature with this ability, but its technique is a little different than most.

Namely, it employs kleptoplasty—a process whereby a living organism gains the ability to photosynthesize by stealing genes from other plants, like algae. In the event that food ever becomes scarce, some biologists believe certain species can sustain themselves on photosynthesis for a time. Eventually though, the effect wanes, and they revert back to their original form.

Of course, science aside…others have pointed out its physical similarities to Ermintrude: the cartoon cow from the Magical Roundabout. Do you see it?

Read This Next
Sundowned
Mexico Bans Startup From Future Solar Geoengineering Experiments
Knew It All Along
Exxon Scientists Knew About Global Warming for Decades While Company Denied It
Solar Slay
Solar Powered Machine Turns CO2 and Waste Plastic Into Valuable Fuel
Dim Sun for Breakfast
Startup Says It's Started Releasing Chemical Into Atmosphere to Dim Sun
Hidden City
NYC's Greenery Eats Up All the CO2 From Its Cars, Trucks and Buses "And Then Some"
More on Earth & Energy
Do The Worm
Yesterday on the byte
Scientists Name "Funky Worm" Amphibian After a Weird 70s Funk Song
Cow Chow
Thursday on the byte
Bill Gates Gives $12 Million to Flatulent Australian Cows
Dye in the Water
Thursday on the byte
Scientists Dye Chunks of Ocean Water Pink for Head-Turning Coastal Experiment
READ MORE STORIES ABOUT / Earth & Energy
Keep up.
Subscribe to our daily newsletter to keep in touch with the subjects shaping our future.
+Social+Newsletter
TopicsAbout UsContact Us
Copyright ©, Camden Media Inc All Rights Reserved. See our User Agreement, Privacy Policy and Data Use Policy. The material on this site may not be reproduced, distributed, transmitted, cached or otherwise used, except with prior written permission of Futurism. Articles may contain affiliate links which enable us to share in the revenue of any purchases made.
Fonts by Typekit and Monotype.