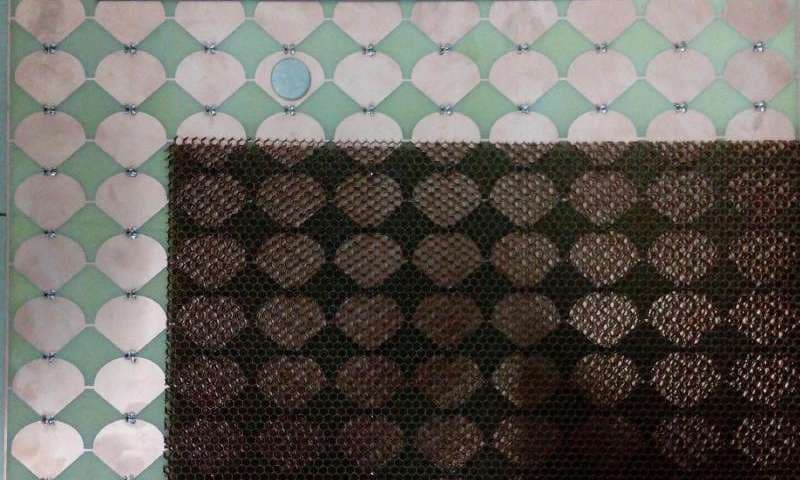 Solving the Problem with Stealth Tech

A microwave absorber is a kind of material that absorbs incident microwave energy in order to make objects invisible to radar. This material is commonly used in stealth technology for cloaking aircraft and warships. However, today's sophisticated radar systems have been improved so that they can detect parts of the electromagnetic spectrum in the near-meter microwave length areas.

In short, microwave absorbers are no longer effective stealth material.

Hence, scientists are working on advanced absorbers that can cloak objects in the ultra-high frequency regimes (from 300 megahertz to two gigahertz). However, there is a catch. Conventional absorbers for the ultra-high regime are thick, heavy, and have narrow absorption bandwidth, making them unsuitable for stealth missions.

To address this problem, researchers from Huazhong University of Science and Technology in China have developed an ultra-thin, tunable broadband microwave absorber for ultra-high frequency applications. Called an active frequency-selective surface absorber, it is made up of arrays of patterned conductors loaded with two common types of circuit elements, known as resistors and varactors. The unit patterned cell absorbs microwaves, and can be controlled by stretching to expand the tunable bandwidth.

In a press release, primary researcher Wenhua Xu highlights the significance of the development: "Our proposed absorber was fabricated with a stretching transformation pattern, which is both thin and can absorb a wide range of frequencies for near-meter microwave application," Xu stated. "Usually the thickness of conventional radar absorbers is a quarter the wavelength of the incident microwave. In the high frequency regime, take one gigahertz as an example, the thickness of the absorber would be around 7.5 centimeters, which is too thick and heavy to be used in aircrafts or warships. Our proposed absorber is almost ten times thinner than conventional ones."

In their experiment, the researchers fabricated a broadband active frequency-selective surface with a stretching transformation pattern on a printed circuit board. Then they soldered the resistors and varactors between each of the two unit patterned cells. Since the surface could be stretched, this means that the parameters of the unit patterned cell can also be actively controlled by stretching.

Xu clarifies the developments by noting that "at frequencies below two gigahertz, conventional microwaves absorbers are limited in application by their thickness and narrow absorption bandwidth. Our proposed absorber has achieved broadband tunability and ultra-thin film simultaneously." And continues, "the total thickness of 7.8 millimeters is around one twenty-ninth wavelength of the central frequency of incident microwaves, and the ultra-thin absorber with broad bandwidth may be widely used in warship stealth, airplane cloaking and tunable, broadband antennae."

Read This Next
Futurism
Scientists Have Made a New Kind of Invisibility Cloak
More on Hard Science
Warped Tour
Thursday on futurism
Professor Believes Door to Warp Drive May Lie With Ethylene Glycol
Sky Bursts
Thursday on the byte
Astronomers Intrigued by 25 Mysterious Repeating Radio Signals From Deep Space
Tractor Beam
Jan 26 on the byte
Scientists Build Working Tractor Beam, Although It's Comically Tiny
READ MORE STORIES ABOUT / Hard Science
Keep up.
Subscribe to our daily newsletter to keep in touch with the subjects shaping our future.
+Social+Newsletter
TopicsAbout UsContact Us
Copyright ©, Camden Media Inc All Rights Reserved. See our User Agreement, Privacy Policy and Data Use Policy. The material on this site may not be reproduced, distributed, transmitted, cached or otherwise used, except with prior written permission of Futurism. Articles may contain affiliate links which enable us to share in the revenue of any purchases made.
Fonts by Typekit and Monotype.