The Bunks in the Chinese Space Station Are Absolutely Enormous

They look a lot bigger than the ones on board the ISS. 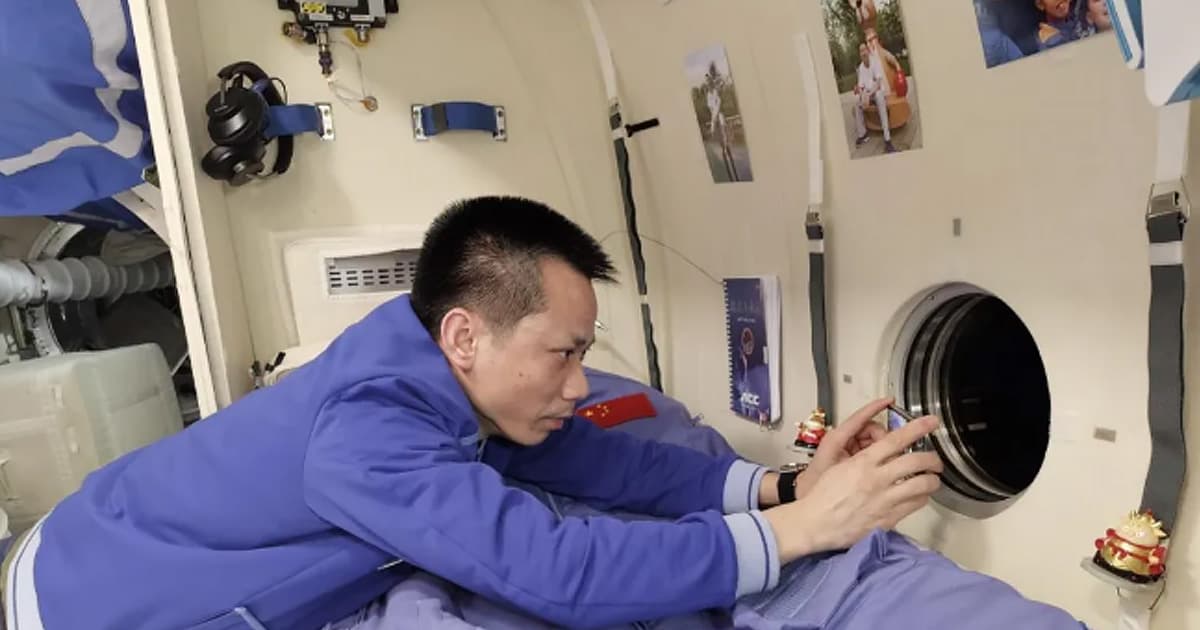 The photo shows Hongbo's sleeping quarters, a large section of the side of the Tianhe core module of China's brand new Tiangong space station. The astronaut appears to have stuck manuals, headphones, and photos of his family to the walls of his spacious bunk, and there's even a private window for him to watch the view outside.

Overall, it looks like Hongbo gets a bed about the size of a twin mattress, along with tons of overhead space, and each crew member on the Tiangong station gets their own separate living quarters.

That's actually a lot bigger than the cramped sleeping quarters on board the International Space Station, where astronauts have to squeeze into a space roughly the size of a phone booth.

"When I was selected [to be an astronaut], they'd give us a test to see if we had claustrophobia," veteran NASA astronaut Scott Kelly, who spent 520 days in space, told Travel and Leisure earlier this year.

"They make you crawl up into a ball in this thick rubber bag with a heavy zipper," he added. "They put a heart monitor on you, zip you up, then push you into a closet. And you wouldn't know how long you had to be in there."

On board NASA's now-retired Space Shuttle, living quarters were even more cramped, forcing astronauts to "sleep kind of together, wherever," according to Kelly.

The crew quarters on board the Tianhe module appear to be substantially bigger — though it's unclear just how big the other bunks are and if every crew member gets such treatment.

It's also only the first module of much larger plans for the station. Even at full size, though, the station will still only be a fraction of the size of the ISS, featuring the Tianhe module for crew quarters and two additional modules for scientific experiments.

Hongbo spent three months — the country's longest space mission — on board the station alongside two other crew members after launching in June. The team spent time setting up the station for future upgrades, including several hours-long spacewalks.

The team successfully made their return journey last week, but China isn't losing any time. The country has already sent cargo supplies to the small module earlier this week with supplies for the next crew of three astronauts, who are scheduled to launch some time next month.

It's an impressive — and breakneck — pace. China is hoping to finish constructing the three-module station by the end of next year.

And it clearly spared no expense to make crew quarters as comfy as possible.

READ MORE: What does the moon look like from China's space station? [CGTN]

Read This Next
And He Scores
We Are Completely Puzzled by This Video of a Chinese Astronaut Playing Ping-Pong in Space
Moon Wrestling
The Head of NASA Is Scared Chinese Astronauts Will Seize Portions of the Moon
Monkey Business
China Plans to Send Monkeys to Space Station to Have Sex With Each Other
God Shot
Astronaut Says He Had Religious Experience During Spacewalk
Sad ROSS
Russia's New Space Station Gets Sadder the More We Hear About It
More on Off World
Hall Effect
Yesterday on futurism
Test Suggests Ion Thrusters Could Power Crewed Interplanetary Missions
CHON: Legacy
Yesterday on the byte
James Webb Discovers Coldest Ice in Known Universe, Harboring Molecules Essential For Life
Is There?
Yesterday on the byte
NASA Setting Up Facility For Mars Rock Samples That Might Contain Alien Life
READ MORE STORIES ABOUT / Off World
Keep up.
Subscribe to our daily newsletter to keep in touch with the subjects shaping our future.
+Social+Newsletter
TopicsAbout UsContact Us
Copyright ©, Camden Media Inc All Rights Reserved. See our User Agreement, Privacy Policy and Data Use Policy. The material on this site may not be reproduced, distributed, transmitted, cached or otherwise used, except with prior written permission of Futurism. Articles may contain affiliate links which enable us to share in the revenue of any purchases made.
Fonts by Typekit and Monotype.