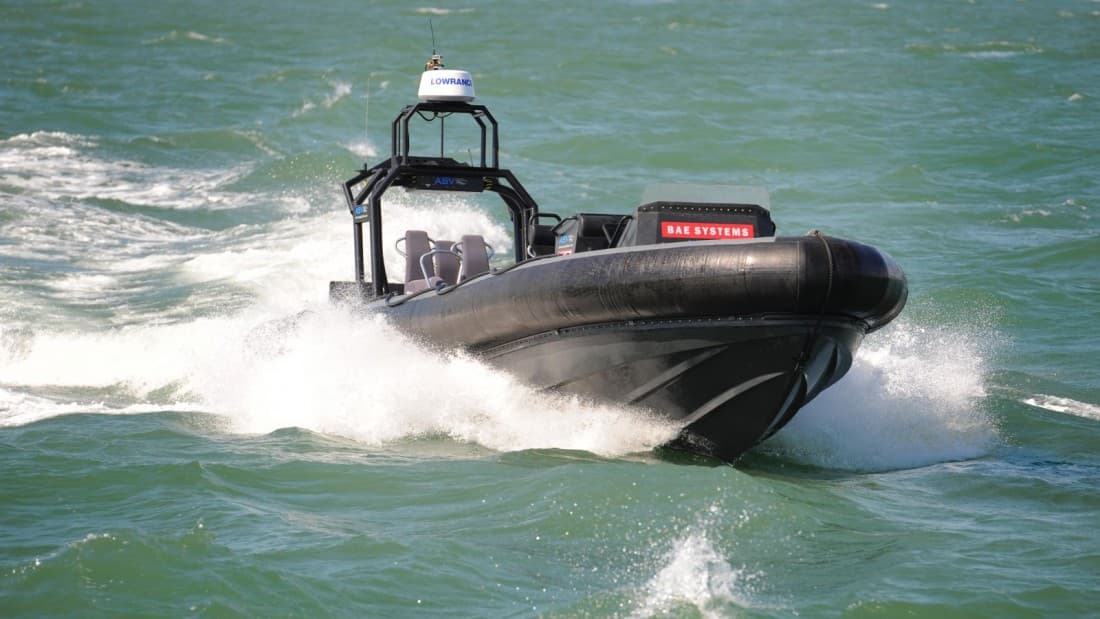 British firm BAE Systems, in partnership with autonomous specialist ASV, unveiled a new unmanned boat technology during a demonstration at a site near Portsmouth Naval Base. The technology, designed to be fitted to Rigid Inflatable Boats (RIBs) used by the Royal Navy, will enable crews to carry out vital tasks such as high speed reconnaissance and remote surveillance while keeping sailors out of harm’s way. The modified boat can operate autonomously for up to 12 hours on either a pre-planned route or via remote control. It has a maximum speed of over 38 knots (44 miles per hour) and can provide unique ship-launched maneuverability and enhanced situational awareness for its operators. On top of its autonomous operation is a system of sensors that include navigation radar, 360 degree panoramic infrared camera array and laser range finder that offer operators a detailed picture within the vessel's range. “This technology delivers an extremely robust and fast-moving unmanned boat that is able to perform a number of surveillance and reconnaissance roles, even when operating at high speed or in choppy water,” said Les Gregory, product and training services director at BAE Systems. He adds, "The successful demonstration highlights the enhanced capability this technology offers. While other programs are primarily designed for larger, slower boats to tackle mine counter-measure scenarios, this system provides an extremely maneuverable multi-role vessel.”

Portchester-based unmanned and autonomous specialist, ASV, provided the unmanned system and software algorithms that control the boat. Dan Hook, managing director for ASV said: “The algorithms we’re developing with BAE Systems allow the boat to perform complex missions and navigate through waters avoiding collisions. This gives it the flexibility and sophistication to operate in a number of different tactical roles, whether it’s patrolling areas of interest, providing surveillance and reconnaissance ahead of manned missions, or protecting larger ships in the fleet." Able to operate up to 40 kilometers away from its parent ship, the boat can be completely autonomous, remote-controlled by a crew on land or from the ship via a hand-held controller, or piloted as usual.

Read This Next
AI After All
This Entire Sci-Fi Magazine Generated With AI Is Blowing Our Puny Human Minds
Let Them Fight
Whatever You Think of BuzzFeed's AI Quizzes, They're Way Less Horrible Than What CNET Has Been Doing
Bot Wreck
Red Ventures Knew Its AI Lied and Plagiarized, Deployed It at CNET Anyway
Pleading the Fifth
Extremely Embarrassing Evidence Emerges Against CEO of “Robot Lawyer” Startup
Chinese Chatbots
Chinese Company Gearing Up to Release Powerful ChatGPT Competitor
More on Artificial Intelligence
Year of Efficiency
Yesterday on the byte
Zuckerberg Says Facebook Will Lean Hard Into AI
Facepalm
Yesterday on the byte
"AI Will Never Replace Journalism," Says Magazine CEO Replacing Journalists With AI
Robot and Sickle
Yesterday on the byte
OpenAI CEO Says His Tech Is Poised to "Break Capitalism"
READ MORE STORIES ABOUT / Artificial Intelligence
Keep up.
Subscribe to our daily newsletter to keep in touch with the subjects shaping our future.
+Social+Newsletter
TopicsAbout UsContact Us
Copyright ©, Camden Media Inc All Rights Reserved. See our User Agreement, Privacy Policy and Data Use Policy. The material on this site may not be reproduced, distributed, transmitted, cached or otherwise used, except with prior written permission of Futurism. Articles may contain affiliate links which enable us to share in the revenue of any purchases made.
Fonts by Typekit and Monotype.