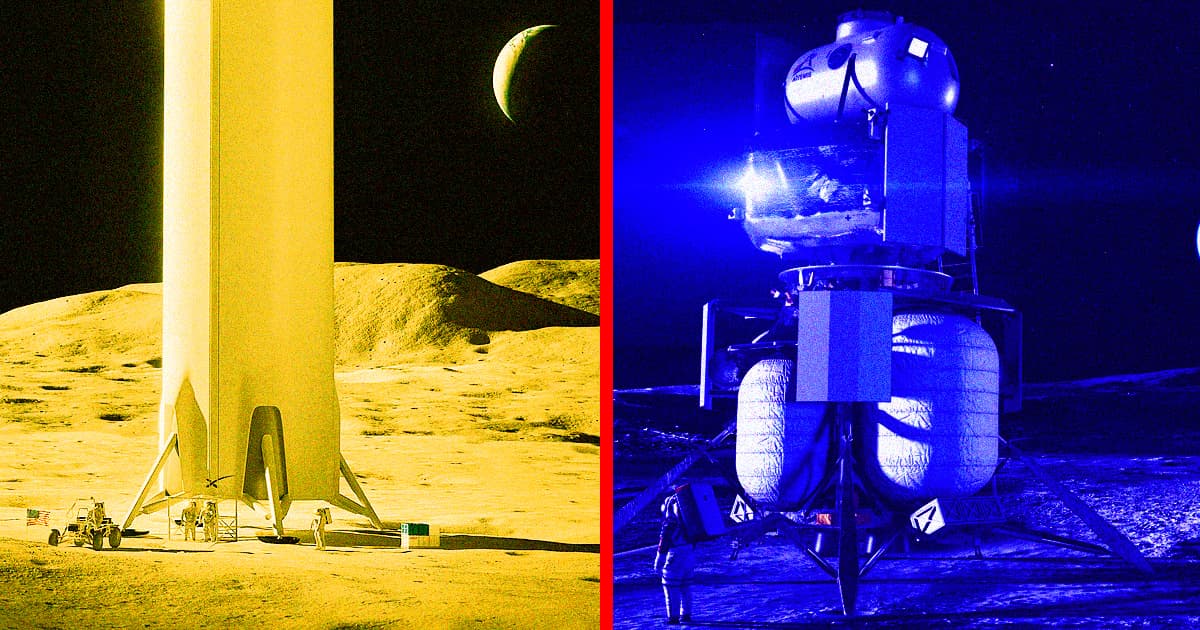 His space company, Blue Origin, had initially contested NASA's decision in April to award SpaceX with the Human Landing System contract, a multi-billion agreement to build a lander capable of bringing the first astronauts to the surface of the Moon since the Apollo missions.

In early May, NASA told SpaceX to cease all work on the contract after Blue Origin and Alabama-based space contractor Dynetics' protests resulted in a temporary suspension, effectively putting the $2.9 billion contract on hold.

Now, the protest filed by the Jeff Bezos-led space company was denied by the GAO effectively handing the contract back into the hands of SpaceX — and SpaceX only.

Even before the GAO's decision, Blue Origin has repeatedly tried to curry lawmakers' favor, arguing that competition is good and that relying on SpaceX alone to land astronauts on the Moon is a bad idea.

In its latest attempt, the company published an infographic arguing that SpaceX's Lunar Starship variant is "immensely complex and high risk" while its Blue Moon lander is "safe, low-risk" and "fast," as first spotted on the company's website by NASASpaceFlight's Adrian Beil.

"There are an unprecedented number of technologies, developments, and operations that have never been done before for Starship to land on the Moon," the infographic reads.

In the graphic, the company argues that Starship would have to fly the Starship "more than 10 times flawlessly" to allow a single spacecraft to have enough fuel to send astronauts to the Moon.

That's in large part due to the need of having one Starship refuel another in Earth's orbit. Orbital refueling was always part of the plan. In fact, in October, NASA awarded SpaceX a $53 million contract for an orbital Starship refueling test.

But how Blue Origin arrived at its claims that Starship has to be refueled at least eight times in orbit to allow it to travel to Moon, as the infographic suggests, is unclear. SpaceX has yet to reveal any exact figures on how many refueling maneuvers a lunar Starship will have to make on route to the lunar surface. Futurism has reached out to SpaceX for comment.

The news comes after Bezos wrote an open letter to NASA administrator Bill Nelson, begging him to give his space company a chance by offering him $2 billion to change his mind on the contract.

In short, Blue Origin isn't ready to accept defeat — and its repeated efforts to undermine the competition aren't a particularly good look either.

"Here's the deal," Ars Technica senior space editor Eric Berger wrote in a tweet, referring to the latest infographic. "The majority of Blue Origin employees I've met are brilliant, nice, hard-working people who joined the company because they believe in its mission. They also respect what SpaceX is doing, and likely find this kind of thing embarrassing."

Blue Origin's Blue Moon lunar lander, in contrast, doesn't exist yet beyond a flashy mock-up model, which was delivered to NASA for tests in August. The BE-7 rocket engine meant to power Blue Moon was put through its paces as part of a static fire test in December as well.

In all, the Bezos-led company's repeated outcries are becoming increasingly difficult to justify. NASA had its hands tied, being allotted a tiny fraction of what it requested to develop the lunar lander. With meager funds, NASA made the decision to award the contract to the lowest bidder — which happened to be SpaceX.

Bezos, one of the richest men in the world, is still hellbent on appropriating taxpayer money to cover the costs of developing his lunar lander — and allowing SpaceX to get the first seat at the table is clearly becoming too much to bear.

Read This Next
Sluggo Mode
SpaceX Has a Major Problem With Its Starlink Internet Connections
Dumpster Fire
SpaceX Tested Starship's Engines and Accidentally Caused a Large Fire
Classified
Here's What the Former Head of NASA Has to Say About the Moon Mission Delay
Next Time
NASA Cancels First Launch Attempt of Uber Expensive Moon Rocket
Back to the Moon
NASA: SpaceX Only Has to Prove It Can Land Astronauts on Moon, Not Bring Them Home Again
More on Off World
Stones Unturned
Sep 24 on the byte
New Project Scanning Old Data for Signs of Alien Civilizations
Crossover Episode
Sep 24 on the byte
NASA Aiming James Webb at Asteroid as DART Prepares to Smash It
Palliative Care
Sep 24 on futurism
NASA's Mars Lander Refuses to Die Even Though It's Supposed To
READ MORE STORIES ABOUT / Off World
Keep up.
Subscribe to our daily newsletter to keep in touch with the subjects shaping our future.
+Social+Newsletter
TopicsAbout UsContact Us
Copyright ©, Camden Media Inc All Rights Reserved. See our User Agreement, Privacy Policy and Data Use Policy. The material on this site may not be reproduced, distributed, transmitted, cached or otherwise used, except with prior written permission of Futurism. Articles may contain affiliate links which enable us to share in the revenue of any purchases made.
Fonts by Typekit and Monotype.