Blue Origin Is Testing Reusable Rockets. Here's Why You Rarely See Them.

Blue Origin is worrying about Blue Origin. That's it. 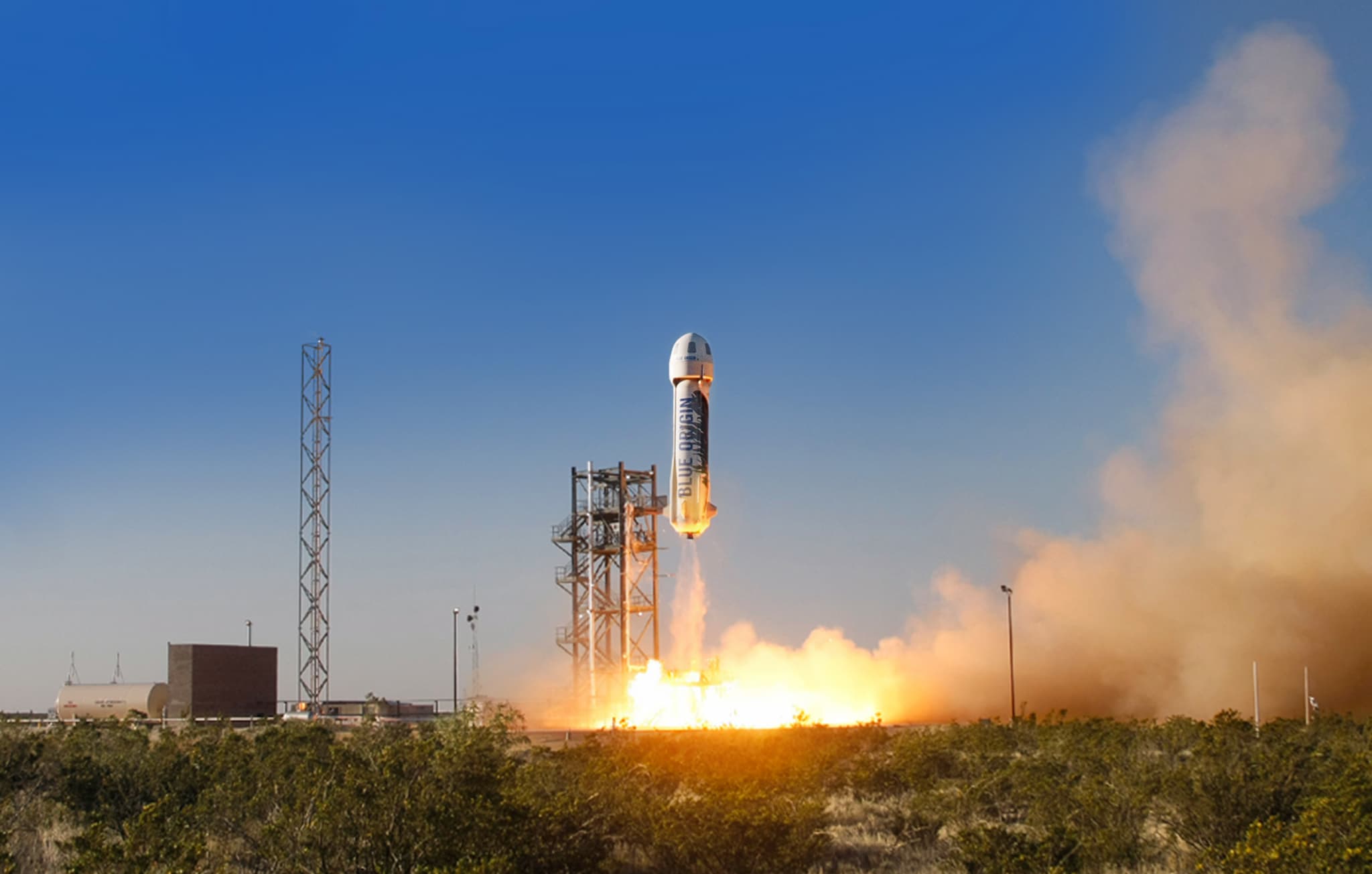 On Sunday, April 29, space travel company Blue Origin launched a test of the New Shepard reusable rocket and the space capsule that the company hopes will one day transport tourists to the edge of space.

It was the eighth such test of this rocket design, and the second for this particular rocket. Yet unlike the PR-heavy, live-streamed fanfare of SpaceX launches, this is also only the second time Blue Origin has made one of their tests available to the public in real time.

Why so secretive, Blue Origin?

No one at Blue Origin — no officials, nor its founder Jeff Bezos — has addressed why Blue Origin's development process is so darn quiet. Based on the interviews they have given, however, it seems that Bezos and Blue Origin are more focused on developing their product than joining the hype of this second "space race."

"Space is a big place. It's not a zero-sum market," Caitlin O'Keefe Dietrich, Blue Origin's Head of Public Relations, told Engadget when asked whether the company felt any pressure to speed up testing based on the achievements of competitors like SpaceX and Virgin Galactic. "Our philosophy is to use an incremental, step-by-step approach for our long-term space technology development programs. And this approach has yielded us a lot of progress thus far," Dietrich added.

Rough translation: Blue Origin doesn't give a damn about SpaceX's media circus. It's not trying to outdo competitors with each subsequent project — the company is working on just two rockets (New Shepard and New Glenn) with hopes to launch a manned flight before the end of 2018. Blue Origin is worrying about Blue Origin. That's it.

It's a bit too early to tell whether Blue Origin's strategy is any better than SpaceX's, or vice versa. Competition is a powerful force for innovation. But with the commercial space industry quickly growing (and SpaceX threatening to monopolize it), it's easy enough to keep innovating in an effort to one-up the competition, losing sight of the main goal in the process.

One way to judge who wins? Whoever sends humans farther than they've ever gone. In that sense, the companies are striving for the same goal in the long term, and those that keep their eyes on the prize might fare best. In her interview with Engadget, Blue Origin's Dietrich said that the company's vision of millions of people living and working in space meant that they "are applauding all launch operators that are building new and more capable systems."

Still, in the short term, the companies are still hungry to grow. Blue Origin is currently competing for a contract to develop a new orbital-class rocket for the U.S. Air Force. It's also unlikely that Blue Origin will keep their process this quiet forever. After all, if the company wants people to purchase a ride on their forthcoming low-orbit flights, it's going to have to get them excited to fork over the cash.

Read This Next
Overview Effect
William Shatner Says His Space Trip Left Him With a Feeling of Terrible Grief
Makeover Scene
Space Tourist Says He's Thinking About Flying SpaceX Craft Up to Fix Hubble
Grain of Salt
There's a Huge Problem With Elon Musk's Promise to Bring Starlink to Iran
Sluggo Mode
SpaceX Has a Major Problem With Its Starlink Internet Connections
Dumpster Fire
SpaceX Tested Starship's Engines and Accidentally Caused a Large Fire
More on Off World
Appetite for Dest...
Yesterday on the byte
Black Hole In "Hyper-Feeding Frenzy" Chews Through Stars and Shoots Its Leftovers Towards Earth
Lunar RGB
Wednesday on the byte
NASA Shows Off Artemis "Party Mode," Powered by Amazon (TM) Alexa (TM)
Putting Things In...
Tuesday on futurism
Amazing Artemis Photo Shows Every Human, Alive or Dead, Plus the Moon
READ MORE STORIES ABOUT / Off World
Keep up.
Subscribe to our daily newsletter to keep in touch with the subjects shaping our future.
+Social+Newsletter
TopicsAbout UsContact Us
Copyright ©, Camden Media Inc All Rights Reserved. See our User Agreement, Privacy Policy and Data Use Policy. The material on this site may not be reproduced, distributed, transmitted, cached or otherwise used, except with prior written permission of Futurism. Articles may contain affiliate links which enable us to share in the revenue of any purchases made.
Fonts by Typekit and Monotype.