Billions of Years Ago, Mega-Tsunamis Washed Across Mars

Ancient waves on Mars indicate that, once, there could have been ancient life on the red world. 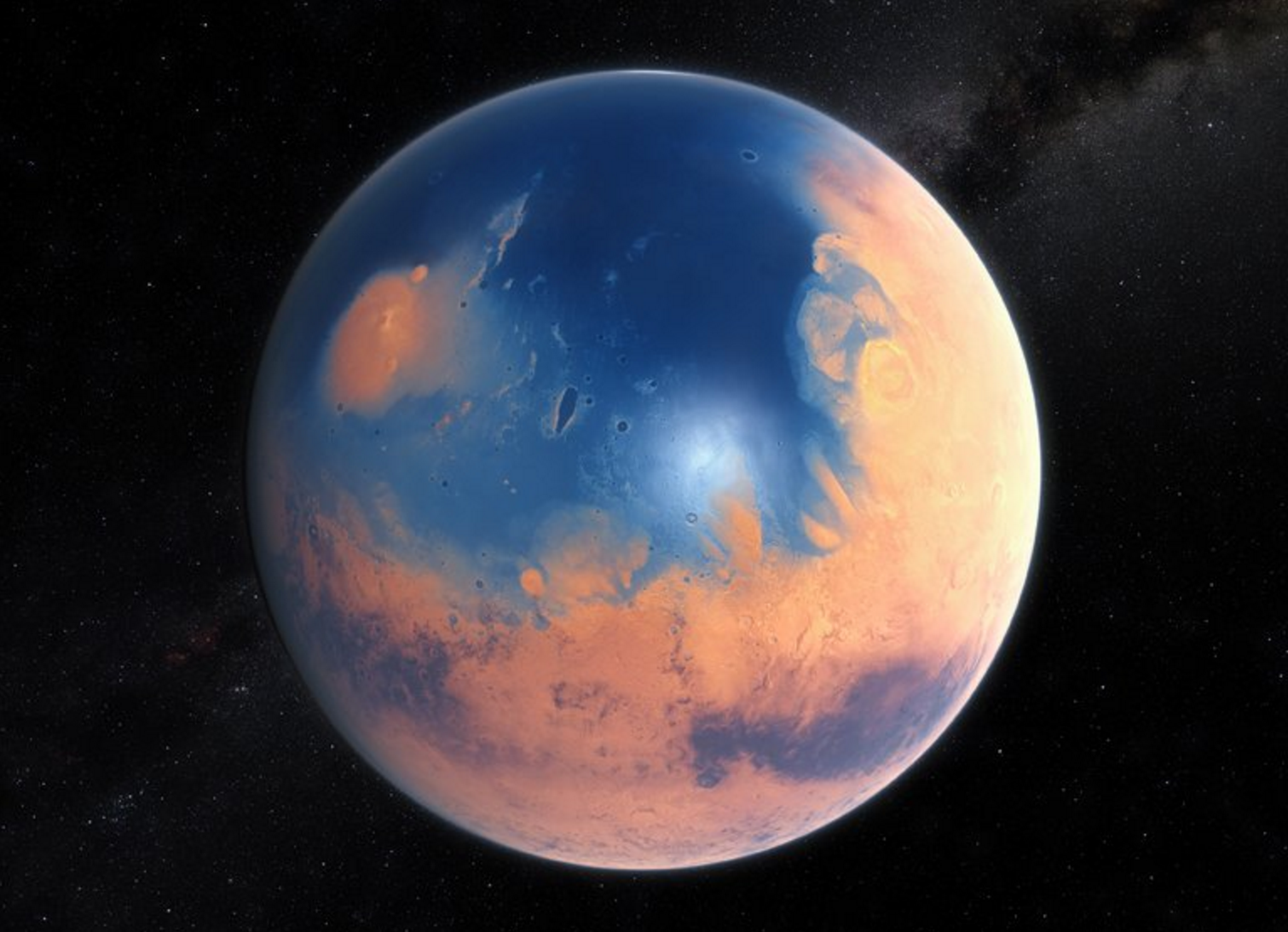 Roughly 3.4 billion years ago, a giant meteorite smacked into the northern plains of Mars. Not too surprising, perhaps, considering the crater-strewn surface of the Red Planet, which is a familiar sight to anyone who consults the Martian maps put out by the NASA’s Viking Orbiters.

However, the aftermath of the impact is surprising. It triggered a mega-tsunami.

That's right—a massive wave scoured the Martian surface, leaving a permanent imprint of the ancient catastrophe and leaving evidence for us to find...evidence of a cold, salty oceans (which may once have harbored life).

The work was published yesterday in Nature Scientific Reports, and it also shows that another impact—a few million years after the first—created a second mega-tsunami.

The two tsunamis had estimated onshore wave heights of up to 120 m (almost 400 ft)! And likely washed several hundred kilometers inland. For comparison, the wave that struck Japan in 2011 was just 39 meters ( 128 ft).

A Cold Ocean on a Cold World

In the millions of years that elapsed between the two impacts and their consequent tsunamis, Mars’ climate underwent a rapid deep-freeze. The Martian ocean seems to have largely frozen over, shrinking the shoreline significantly.

“The older tsunami emplaced enormous boulder-rich deposits and as the wave retreated back into the ocean it formed widespread backwash channels,” explains J. Alexis Palmero Rodriguez, lead author of the study and Senior Scientist at the Planetary Science Institute.

The second tsunami, however, formed great lobes of ice where it reached its maximum extent, where the water froze and never returned to the mother ocean. These lobes largely retain the boundaries they had when they froze, and still have their “flow-related” shapes, which means they might still contain frozen and emplaced materials from that ancient ocean—a time capsule, of sorts, filled with fossil remnants of ancient Mars.

They would be a perfect target for a future geological lander on the Red Planet; in fact, some of the features are very close to the old Mars Pathfinder site, so no dramatically new technologies are required to reach them.

It’s thought that the ancient Martian ocean was extremely salty, which means that, even in subfreezing temperatures, it likely remained liquid. Such hypersaline environments are known to be habitable in terrestrial seas, so these “icy lobes” might be a perfect place to search for evidence of past life.

“Subfreezing briny aqueous environments are known to be habitable environments on Earth, and consequently, some of the tsunami deposits might be prime astrobiological targets,” says study coauthor Alberto Fairén, principal investigator at the Center for Astrobiology, Spain.

Read This Next
Palliative Care
NASA's Mars Lander Refuses to Die Even Though It's Supposed To
Signs Of Life
NASA Seems Awfully Excited About Finding Organic Matter on Mars
Muellholland Drive
SpaceX Defector Is Aiming to Land on Mars Before Elon Musk
Mars Rock Blues
Mars Rock Samples Probably Won't Infect Earth With Deadly Martian Plague, Scientist Says
Carbon-Based
NASA Rover Finds New Potential Evidence for Ancient Life on Mars
More on Off World
Centrifugal Motion
Yesterday on the byte
NASA Tests System to Fling Satellites Into Sky Using Huge Centrifuge
Universally Cool
Yesterday on the byte
Madman Builds "Entire Universe" in Minecraft
I'll Allow It
Wednesday on the byte
SpaceX Ground Control References "Mean Girls" During Astronaut Launch
READ MORE STORIES ABOUT / Off World
Keep up.
Subscribe to our daily newsletter to keep in touch with the subjects shaping our future.
+Social+Newsletter
TopicsAbout UsContact Us
Copyright ©, Camden Media Inc All Rights Reserved. See our User Agreement, Privacy Policy and Data Use Policy. The material on this site may not be reproduced, distributed, transmitted, cached or otherwise used, except with prior written permission of Futurism. Articles may contain affiliate links which enable us to share in the revenue of any purchases made.
Fonts by Typekit and Monotype.