Best Telescopes for Beginners in 2022

See the stars and beyond. 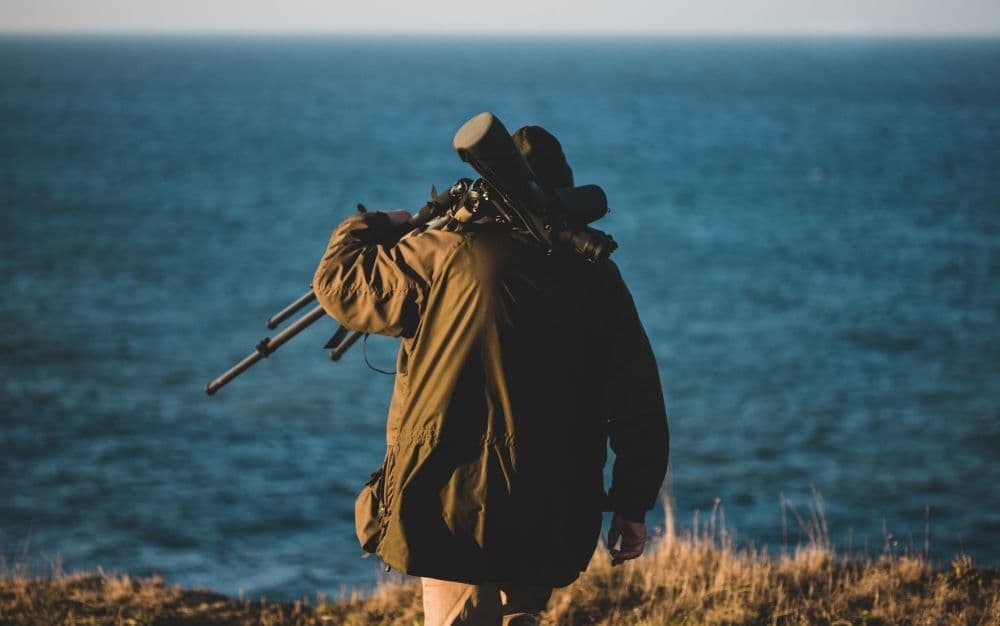 I’ve been hunting for a telescope for beginners for a while now. My favorite part about summers in my home state of Georgia is getting to see all the stars on a clear night. The house I grew up in was in a wooded part of town, and as soon as spring started every year, I’d spend at least an hour out on the porch each night trying to see if I could point out Orion’s Belt or the Big Dipper. When I moved to New York City for college, I had to adjust to barely seeing any stars in Manhattan even on the clearest nights, and even though I now live in Brooklyn, I can only get a slightly better view from my roof.

If you’re a suburb-to-city transplant like me (or just a new astro-enthusiast), the best telescopes for beginners can help you find your favorite constellations and planets from any rooftop or park. Today’s telescopes aren’t like Galileo’s — nowadays, you can find lightweight devices that can be easily transported anywhere. Whether you know absolutely nothing about telescopes or this is the 15th article you’ve read to convince yourself to bite the bullet, the best telescopes for beginners will help you reach new celestial heights.

How We Picked the Products

As a journalist and product reviewer, I’ve interviewed astronomers and astrophysicists about finding the best telescopes. I used what I learned from them, as well as outside research, to narrow down my choices for the best telescopes for beginners based on the following criteria:

Aperture: A telescope’s aperture describes the diameter of the lens — and, therefore, how much light it lets in. The more light, the greater detail you’ll be able to see. I went for models with apertures of at least 3 or 4 inches, depending on the type of telescope. For another perspective on light, check out our guide to the best lava lamps.

Magnification: The magnification of a telescope tells you how far you can zoom in with your telescope. It’s calculated by dividing the focal length by the length of the eyepiece, according to Sky & Telescope. I looked for devices with magnifications of at least 30x for those who want to see details on large planets like Jupiter and Saturn.

Ease of Use: Like I said before, you don’t need a Galileo-esque telescope to check out Jupiter. I prioritized telescopes that are easy to carry around so that you’ll actually want to use them. I also looked into those with special features like finderscopes to help you locate specific celestial objects. Get inspired with some of the best space games.

The Best Telescopes for Beginners: Reviews and Recommendations

Why It Made The Cut: With a large 8-inch aperture, precise controls, and additional accessories, the Sky-Watcher Traditional Dobsonian 8-inch is an ideal option for absolute beginners.

Dobsonian telescopes are ideal for beginners. Their alt-azimuth, or two-axis, mounts are easy to maneuver, they let in plenty of light, and they offer simple setup. The Sky-Watcher Classic 200 Dobsonian 8-Inch is one of the best for its ease of use — it uses Sky-Watcher’s proprietary tension control handle to make swiveling and adjusting a breeze. Two eyepieces (one 25mm and one 10mm) help widen the field of view, and a two-inch focuser with 1.25-inch adapter adds to the telescope’s flexibility.

If you’re looking to upgrade from whatever slightly-crappy viewfinder app you downloaded to your smartphone, the Classic 200 comes with a 9×50 finderscope. The only downside to this otherwise robust device is that it’s heavy at 45 pounds. It detaches into two pieces — a 20-pound tube and 25-pound base — that make it slightly easier to carry around, but it may be difficult to haul around on foot.

Why It Made The Cut: This lightweight telescope comes with an adjustable tripod, three eyepieces, and tool-free operation, making it excellent for young astronomy buffs looking to get into stargazing.

Cons:
— Not easy to carry

Young stargazers can learn how to use a telescope with the Gskyer 90mm Astronomical Refractor Telescope. It comes with three eyepieces — 25mm, 10mm, and 5mm pieces that correspond to magnifications of 24x, 60x, and 120x, respectively — and an adjustable tripod to help kids get a precise view. The device also uses an easily maneuvered alt-azimuth mount, making it a great telescope for kids.

As far as telescopes go, this one is pretty affordable, especially given the included accessories. The only downside is that while this Gskyer device is lighter than the Sky-Watcher Classic 200, it’s still a bit heavy for kids at nearly 18 pounds.

Why It Made The Cut: The Celestron FirstScope Telescope is lightweight, less than $100, and comes with a robust accessory kit.

Cons:
— Not ideal for viewing planets

It’s hard to find affordable telescopes, much less one that comes with the bells and whistles you need for optimal use. This telescope and accessory kit combo from Celestron goes for less than $100, giving you the maximum bang for your buck as you wade into stargazing. It’s just 3.6 pounds, meaning you can easily bring it anywhere for on-the-go viewing. It comes with 20mm and 4mm eyepieces, which offer magnifications of 15x and 75x respectively.

The magnifications and aperture offered here are lower than others on our list, and as such, it can make viewing certain celestial objects difficult (for example, you likely won’t be able to view harder-to-see planets like Mars). The accessory kit helps make up for it by including a 5×24 finderscope and Moon filter, which increases contrast and reduces brightness to give you a better view.

Why It Made The Cut: The Celestron NexStar 130SLT is equipped with a database of thousands of stars, planets, and galaxies and a complementary device to help you locate them yourself.

Computerized telescopes can be great for absolute beginners because they have thousands of celestial bodies logged and ready to pinpoint. The Celestron NexStar 130SLT offers a database of thousands of stars, galaxies, and more. The Sky Tour device helps point out objects that will be easy for you to find based on when and where you’re looking.

This pick is on the lighter side, weighing in at a little over 11 pounds, meaning you can take it anywhere for precise stargazing. It also comes with two eyepieces — one that’s 25mm and one that’s 9mm, for magnifications of 26x and 72x respectively (though the telescope’s maximum useful magnification is 307x, with the right eyepiece). Its one downfall is that it’s expensive. If you’re itching for a computerized telescope at a slightly lower cost, we also like the Celestron StarSense Explorer DX 130AZ Smartphone App-Enabled Reflector Telescope.

Why It Made The Cut: Weighing in at 3.3 pounds, this telescope is easily portable. It also comes with a tripod, smartphone adapter, and custom backpack for carrying.

If you want a versatile telescope, look no further than the special edition Popular Science by Celestron Travel Scope 70. The ultra-light device comes with a backpack for easy carrying, and the smartphone adapter and Bluetooth remote shutter release allow you to take photos remotely. It also includes a tripod, finderscope, and Moon filter for even more precise use.

While the telescope has plenty of bells and whistles, its low aperture and magnification don’t make for the best planetary viewing. It is, however, great for daytime use too — you can take it out to the field for some birdwatching, or you can get a good view of the Moon as it starts to rise before the sun sets.

Things to Consider Before Buying a Beginner Telescope

You know the phrase “out of sight, out of mind?” If you’re a beginner, that’ll likely apply to your telescope — if it’s so heavy or cumbersome that you can’t take it anywhere outside your home, you’ll probably be less inclined to use it. If you’re set on a larger telescope, look for one that can detach into a few more easily-carried pieces so you can bring it on-the-go.

It’s important to know what you want to be able to see with your telescope. If you want a telescope that’s good for daytime use and that can show you the Moon and some large planets like Jupiter and Saturn, you likely won’t need a telescope with a magnification much more than 40x. If you want to see planets like Mars or further celestial objects, look for magnifications in the 100x range.

It’s no secret that telescopes can be expensive, but the cost doesn’t have to be prohibitive. While you definitely don’t need to drop nearly $1,000 for a good telescope, note that cheaper options may not have the magnification or finderscope features useful for planetary viewing.

Q: How much does a telescope for beginners cost?

The cost of a telescope can vary widely — the range on this list alone goes from less than $100 to nearly $1,000. You don’t have to spend an exorbitant amount of money to get a good telescope, but cheaper models may lack the magnifying power and extra features that would be useful for someone just starting out. Find some other ideas for budding astronomers in our guide to the best space gifts.

Q: What is a good magnification for a telescope to see the planets?

If you’re looking for planets in our solar system, a magnification of about 30x is the minimum you’d want to see larger planets like Jupiter and Saturn. For bodies like Mars, you’ll want at least 100x magnification (though going higher won’t hurt). Don’t forget that aperture is also important when it comes to viewing anything through your telescope, as it determines how bright the images are and whether you can see finer details.

Q: What are the three main types of telescopes?

You don’t need to be an astronomy buff to enjoy stargazing on a clear night — and you also don’t need to take out a second mortgage to get a good telescope. We’d recommend the Sky-Watcher Classic 200 Dobsonian 8-Inch as the best overall for beginners, but if you want something lighter, go for the Popular Science by Celestron Travel Scope 70. If budget is top of mind, the Celestron FirstScope Telescope & FirstScope Accessory Kit is a great starter set.