Automation is about to give capitalism a run for its money.

Many articles that talk about automation and its resulting job displacement may sound alarmist. However, studies have shown that automation will disrupt labor, especially industrial work.

A recent study by analysts Michael Parker and Alberto Moel at global investment research and management firm Bernstein predicts that automation is doing much more than just job displacement. According to Parker and Moel, the rise of automation beginning in the industrial and manufacturing sectors is changing one of the most basic assumptions in modern economics.

Gone are the days when specialization, as the father of modern economics Adam Smith said, is the way to go to optimize a country’s economy. Now, companies will just go for automation to balance the mismatch between the high cost of labor and the lower cost of manufacturing.

This points to a disturbing realization: bringing back jobs into the US might not work. Simply put, there won’t be any jobs to bring back. Companies, instead of choosing to spend on labor, will just opt for automation. All signs point to this, with global market spending on robots more and more. Job displacement seems inevitable. 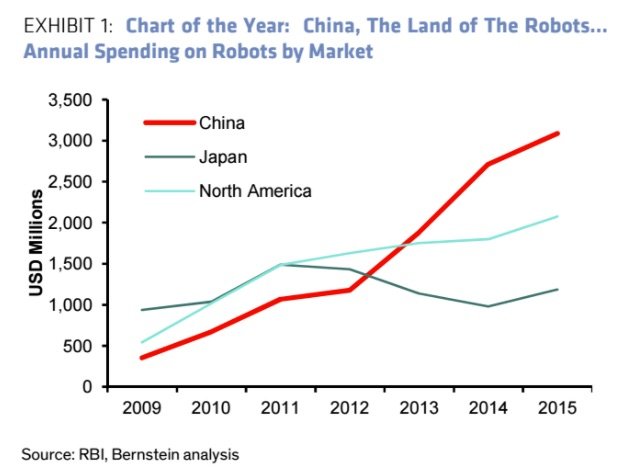 According to Bernstein: “The ability of new emerging markets to grab these jobs and the export activity that comes with them will be eroded [and] … will militate in favor of automation and staying in China.”

Automation, according to the World Economic Forum, will take over 5 million jobs by 2020. Forrester predicts automation to take over 7% of jobs in the US by 2025, with a similar Oxford study looking at a more than 1.3 million jobs up for automation in the UK by 2030.

You can already see it happening, with Walmart using drones for warehouse delivery and the Department of Defense using these in surveillance, and with Amazon Go doing away with store personnel. Other sources suggest that it won’t be unique to manufacturing jobs. 80% of jobs in the IT industry could be replaced by artificial intelligence (AI). Then there’s also the recent news that IBM’s Watson can treat cancer patients as well as a human doctor.

The future of labor has never been more uncertain. Strategies for helping those displaced workers are starting to be more widely debated. Programs for a Universal Basic Income (UBI) are even starting pilot tests in multiple countries around the world.

Mini-Brain in the Cell Membrane

This Startup’s Computer Chips Are Powered by Human Neurons

Dystopian Startup Wants to Hang Your Furniture From The Ceiling

Tiny Spies: This Insect-Like Flying Robot is Smaller Than a Penny