A year-round greenhouse could grow food in polar stations and in space. 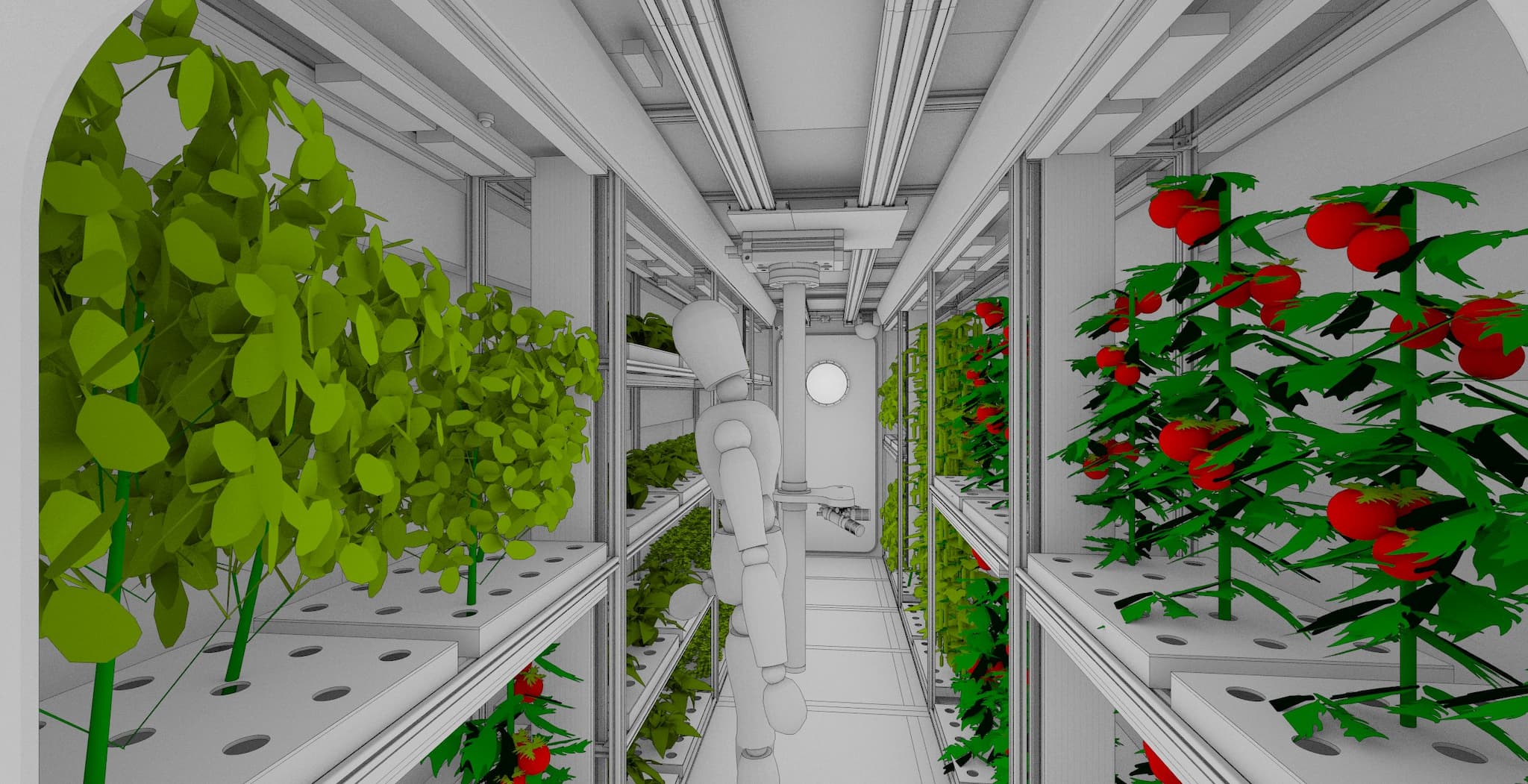 Antarctica's nonstop winters make it impossible to grow food outdoors. Fruits and vegetables are instead shipped long distances from overseas, just a few times per year.

But engineers at the German Aerospace Center (GAC) will soon build a high-tech farm that will allow Antarcticans to harvest produce.

The farm will feature a year-round greenhouse that can grow food for researchers at the Neumayer III polar station on the Ekstrom Ice Shelf.

Called the Eden-ISS, the farm exists inside a climate-controlled shipping container. The greenhouse relies on  a technique called vertical farming, in which food grows on trays or hanging modules under LEDs instead of natural sunlight.

Take a look at the farm, which will come to Antarctica in October, below.

Before the Eden-ISS shipping container farm debuts in Antarctica, the GAC is testing growing fruits and vegetables at its headquarters in Bremen, Germany.

The 135-square-foot farm can grow all sorts of produce indoors. Harvesting food outdoors is impossible in Antarctica due to its endless winters.

The only way to get produce to McMurdo, the US station where the majority of Antarctic researchers stay, is by ship or plane. In January, a shipment of dried and frozen food is delivered, and during summer, planes come with fresh food around once a week, according to Atlas Obscura.

GAC scientist Paul Zabel will move with the farm to Antarctica, where he will grow fruits and vegetables under 42 LED lamps.

Since the farm is climate-controlled, it can grow crops year-round in a place where temperatures can plummet as low as -100 degrees Fahrenheit.

As Modern Farmer notes, some sub-Arctic regions are experiencing somewhat of an agricultural boom, due partly to climate change.

Over the past 100 years, Arctic temperatures have increased at nearly twice the global average, making it possible to grow crops in once-desolate places like Yellowknife in Canada and Greenland.

In order to help the plants thrive, the researchers pump in extra carbon dioxide and set the temperature at 75 degrees Fahrenheit.

The LEDs are tuned to red and blue wavelengths — the optimal light frequencies for growing produce.

The crops are stacked on trays. Every few minutes, they receive a spritz of nutrient-rich mist.

The researchers plan to grow between 30 and 50 different species, including leafy greens, peppers, strawberries, radishes, and tomatoes, as well as herbs like basil and parsley.

In July, the team grew its first cucumber, which measured 96 grams and 14 centimeters long, inside Eden-ISS.

In February, the GAC built the farm's platform by crane in Antarctica. Everything else will arrive next month.

The larger goal of the Eden-ISS project is to create a system that allows GAC astronauts to harvest food in space.

If the researchers can perfect a growing process for Antarctica's harsh climate, they may stand a chance at growing on Mars or the moon.

Read This Next
Not Atlantis
A Satellite Found Remnants of Lost Continents Under Antarctica
Futurism
Antarctic Research Project Will Determine If a Huge Glacier Will Soon Break Off
Futurism
Antarctica Saw More Snowfall Over Past 200 Years. Sounds Like Good News... But It's Not
Futurism
Finding Meteorites In Antarctica is Grueling but Worth It
Futurism
Oddly Enough, More Snow in Antarctica Could Slow Rising Sea Levels
More on Earth & Energy
Stem Ware
Yesterday on the byte
Scientists Discover World's Oldest Preserved Vertebrate Brain
From Bad to Worse
Thursday on the byte
Global Warming Is Worse Than We Thought, AI Tells Scientists
RIP Fred
Thursday on the byte
Instead of Predicting Length of Winter, Groundhog Simply Dies
READ MORE STORIES ABOUT / Earth & Energy
Keep up.
Subscribe to our daily newsletter to keep in touch with the subjects shaping our future.
+Social+Newsletter
TopicsAbout UsContact Us
Copyright ©, Camden Media Inc All Rights Reserved. See our User Agreement, Privacy Policy and Data Use Policy. The material on this site may not be reproduced, distributed, transmitted, cached or otherwise used, except with prior written permission of Futurism. Articles may contain affiliate links which enable us to share in the revenue of any purchases made.
Fonts by Typekit and Monotype.