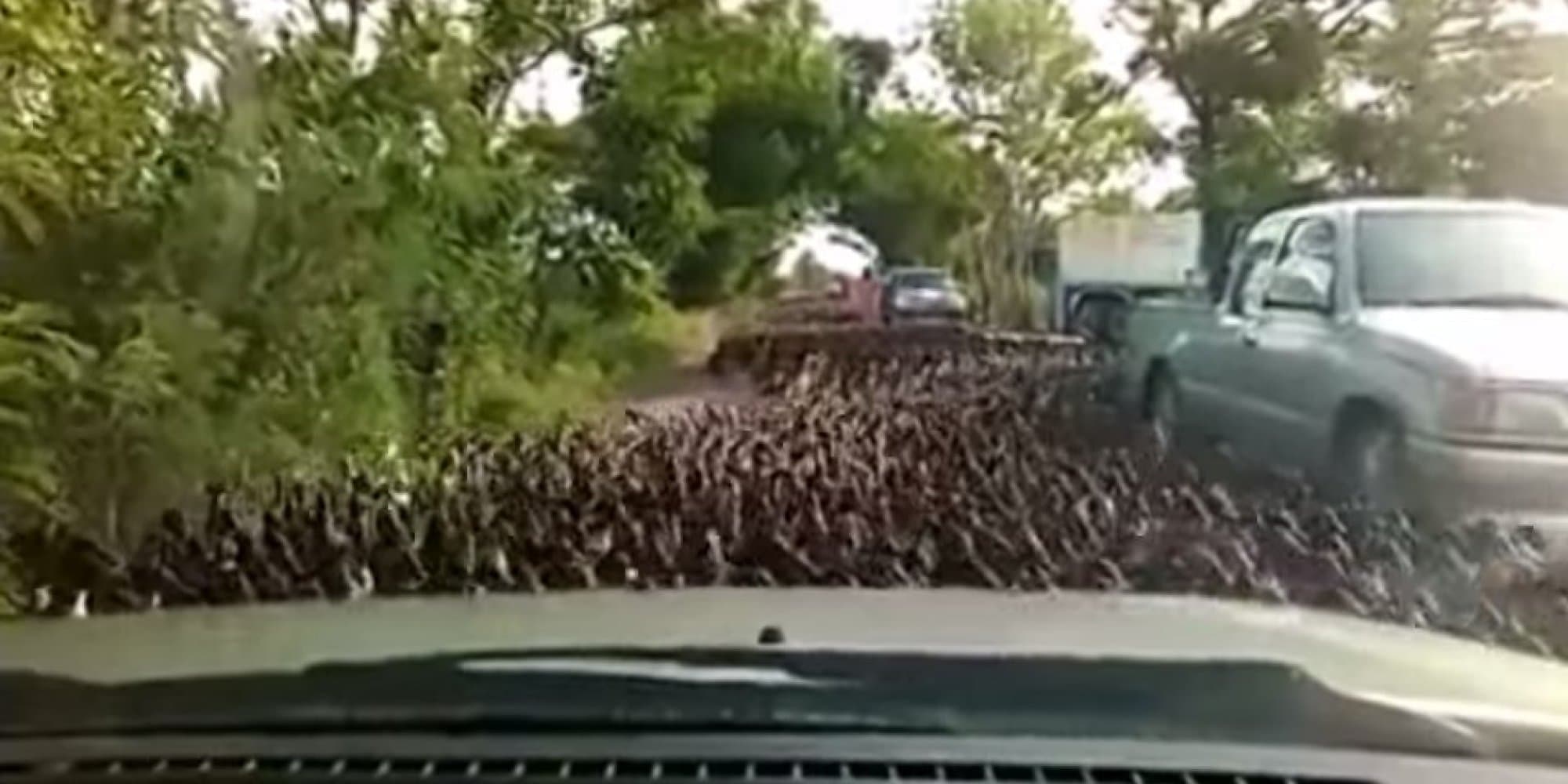 When we think of pests, most of us don't think of ducks. This is because, typically, ducks travel about in small flocks. These flocks usually only contain a few dozen ducks, and unless the ducks are pestering you for a bit of bread as they swim about in some local pond, they generally keep to themselves. However, one unfortunate man recently encountered a virtual horde.

And a horde of ducks may sound cute. But in reality, it is loud and chaotic (and a bit unsettling).

Last week, one Facebook user  uploaded this (slightly horrifying) video of several thousand ducks stampeding across the road. Most estimates put the number at 100,000. However, the actual number of ducks shown in the video is unknown (if you happen to count them, be sure to get back to us with the actual figure). The video was captured in Thailand, and as you can see in the film, the flock brought traffic to an utter stand still.

The reason for this (rather fast-paced) stampede is probably due to farmers who are raising the ducks in a local area, herding them from one location to another (such practices are common in this area). Either way, it is clear that they are trying to get somewhere in a hurry.

Now then, on to the good stuff.

Ducks are able to flourish in a number of climates, as they are slightly water-proof. Their feathers have a wax coating, which helps keep water off of them as they swim and dive. This ensures that they are able to keep warm even in the coldest climes, as regardless of how deep they dive, the downy feathers underneath stay dry.

In fact, ducks are found on every continent in the world, except for Antarctica (I bet Antarcticans are really sad about this).

As you probably know, ducks are amazing swimmers thanks to their webbed feet. Ducks are also capable creatures from a very young age. Just a few hours after birth, they are able to leave their nest (they are born with down and already have their eyes open, which assists with this process).

Ducks are also omnivorous creatures. They will eat grass and aquatic plants as well as fish, insects, and a variety of other foods.  Ultimately, this is beneficial, as a large horde (like the one shown above) will not likely eat all of the grass, insects, etc. in an area, as they have a wide ranging diet. This means that food will likely be left for other organisms that rely on one specific kind of food for their survival.

This brings us to a rather major point.

Feeding Them is No Bueno

Although it may be fun to go to a duck pond and feed the birds, you should be very careful, and only do this only in areas that are designated for this practice. Ducks get used to being fed by humans, and they may stop searching for food on their own.

Indeed, they may be unable to fend for themselves as a result of long term human interaction. Moreover, if they are being fed by humans, many ducks will not migrate when they should. This may ultimately lead to the duck's death.

As is true of all other organisms, it is best to just observe these creatures from a distance, and avoid close interactions whenever possible.