Hundreds of speakers work together in this first-of-its-kind system. 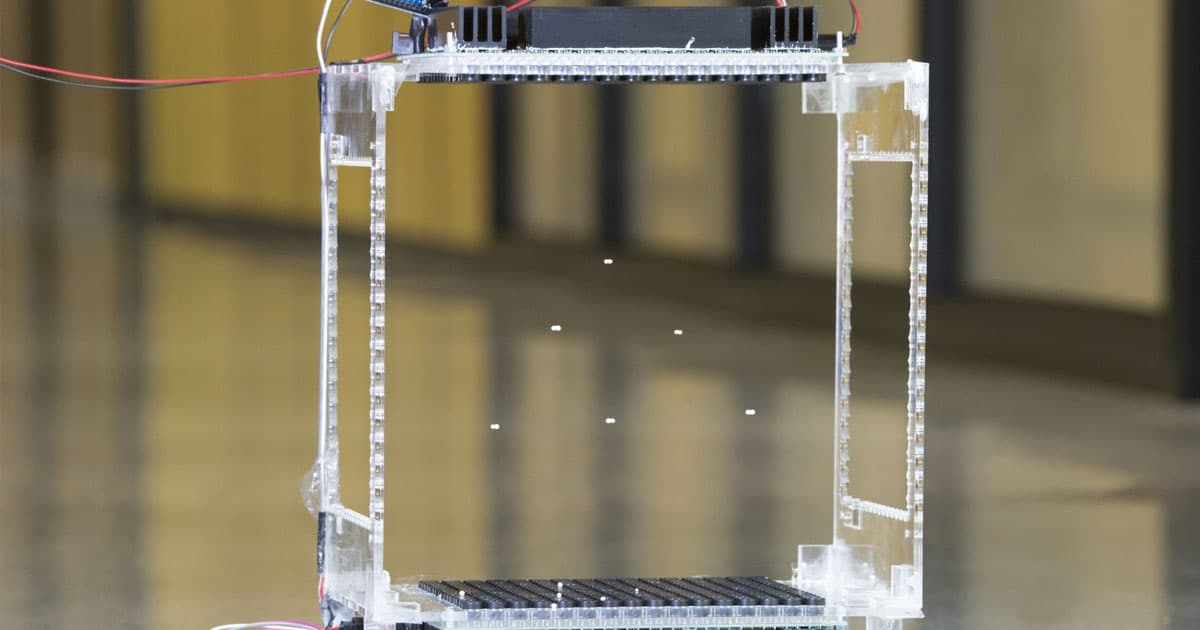 A pair of researchers didn't need a Harry Potter spell to levitate multiple objects at once. They just needed the power of sound waves.

In a paper published in the Proceedings of the National Academy of Sciences on Monday, researchers Asier Marzo Pérez of the Public University of Navarra and Bruce Drinkwater from the University of Bristol describe how they were able to use sound to levitate multiple objects independently of one another — a never-before-accomplished feat the researchers say could lead to next-generation medical procedures.

The duo started by building two arrays, each featuring 256 tiny speakers just one centimeter in diameter. Next, they placed those arrays on opposite walls with the speakers facing inward. Finally, they placed a sound-reflective surface on the ground between the arrays.

Using a computer, the researchers could cause the speakers to emit sound waves in the 40-kilohertz range. By manipulating the sound waves using a specially developed algorithm, the researchers found that they could exert a force on tiny objects placed on the reflected surface, causing them to levitate.

In their experiments, they managed to manipulate Styrofoam balls with diameters up to three millimeters, causing the balls to appear to dance in midair.

According to the researchers, we could one day use a version of their acoustic tweezers to conduct surgery-free medical procedures within the human body.

"The flexibility of ultrasonic waves allows us to operate at micrometric scales to move cells inside 3D printed structures or living tissue," Marzo said in a news release.

To that end, the team plans to begin working on finding a way to get their technique to work in water. They're hoping that will take less than a year, after which they'll begin focusing on adapting the technology to work in biological tissue.

More on sound levitation: Sonic Tractor Beams: Scientists Made a Hologram Device That Costs Less Than $10

Read This Next
Futurism
Physicists Successfully Levitate Large Objects With Sound Waves
More on Hard Science
Tractor Beam
Jan 26 on the byte
Scientists Build Working Tractor Beam, Although It's Comically Tiny
Having a Blast
Jan 18 on the byte
New Study Shows Where You Should Hide to Survive a Nuclear Attack
Offworld Amino
Jan 15 on the byte
Scientists Find Building Blocks of Life in Meteor That Smashed Into Family's Driveway
READ MORE STORIES ABOUT / Hard Science
Keep up.
Subscribe to our daily newsletter to keep in touch with the subjects shaping our future.
+Social+Newsletter
TopicsAbout UsContact Us
Copyright ©, Camden Media Inc All Rights Reserved. See our User Agreement, Privacy Policy and Data Use Policy. The material on this site may not be reproduced, distributed, transmitted, cached or otherwise used, except with prior written permission of Futurism. Articles may contain affiliate links which enable us to share in the revenue of any purchases made.
Fonts by Typekit and Monotype.