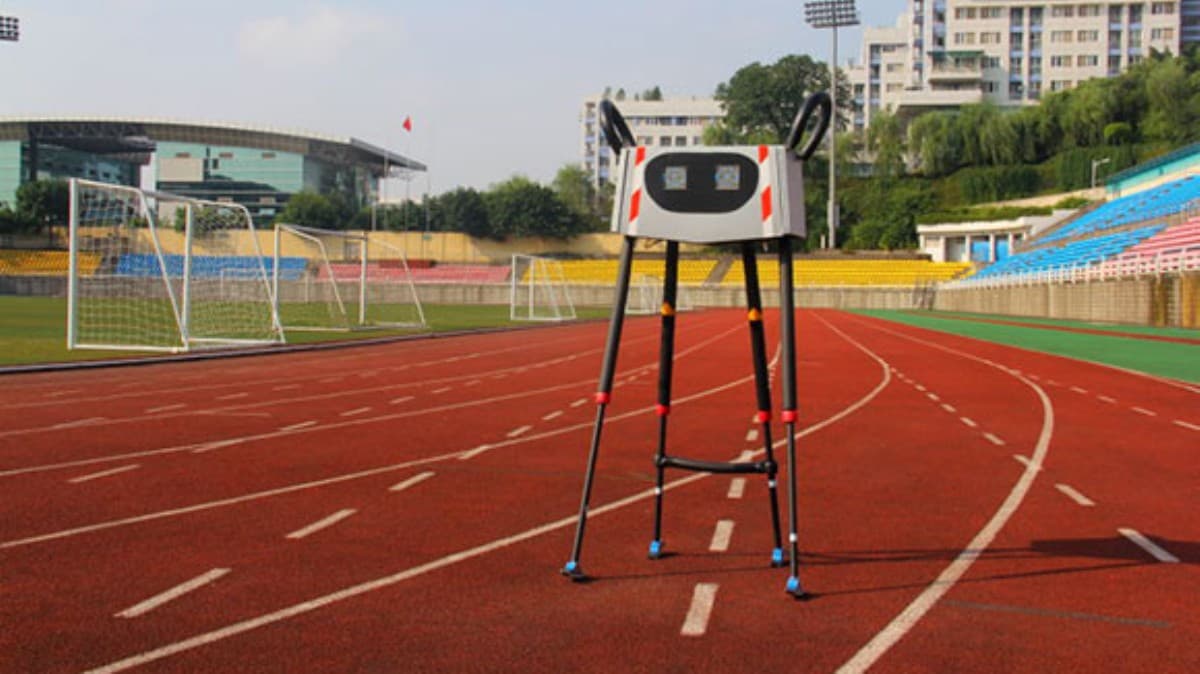 A quadruped robot just set a new long distance record. Xingzhe No. 1, a robot that was developed by a Chinese team from the College of Automation of Chongqing University of Posts and Telecommunications, traveled a staggering 134.03 km (83.28 miles), which is a lot farther than your average human can go without rest.

The robot moved continuously for an impressive 54 hours and 34 minutes, taking 360,000 steps in the process. Ultimately, this equals out to just about 2.5 kmh (1.5 mph). True, that may not be a terribly fast speed, but the stamina is what is remarkable (and it's what the researchers were trying to improve).

For the attempt, Xingzhe completed 1,405 laps on a 95.39-meter indoor track. The previous record was held by robot called the Ranger Robot, which was built by a team from Cornell University. The Ranger Robot covered 25 km (40.5 mi), less than half of what Xingzhe No. 1 did on its record-breaking laps.

See Xingzhe in action in the video below:

The four legs of Xingzhe No. 1 are controlled by a central circuit system. The legs in front are spaced slightly further apart than the legs in the back, allowing the both pairs to overlap. The two pairs work together in a motion that looks a little similar to a human using crutches. Notably, quadruped robots must be a single mechanical machine without wheels (hence, where the "quad" comes from).

The team of developers was led by Professor Li Qingdu, and they aimed to test electrical efficiency and to stretch the feats that current robotics can achieve. Another objective was to study the reliability, durability, and potential of current robotics to perform remotely controlled missions.

Ultimately, the robots would be in situations that are dangerous for humans to be in. Thus, the process involved in the project will, hopefully, be applied to other robots to make them better at completing risky tasks that cover long distances and require significant stamina.

Read This Next
Chinese Chatbots
Chinese Company Gearing Up to Release Powerful ChatGPT Competitor
D'oh!
US Military Horrified by Chinese Military Spending Money on Exact Same Crap They Do
Robo Cops
China Deploys Its First Robot Traffic Police
Always Watching
China Is Installing “AI Guards” in Prison Cells
Arms Race
China Thinks AI Could Make Its Military As Powerful as America's
More on Artificial Intelligence
AI After All
5:58 PM on futurism
This Entire Sci-Fi Magazine Generated With AI Is Blowing Our Puny Human Minds
AI Hands
5:37 PM on the byte
Here's Why AI Is so Awful at Generating Pictures of Humans Hands
Let Them Fight
4:14 PM on futurism
Whatever You Think of BuzzFeed's AI Quizzes, They're Way Less Horrible Than What CNET Has Been Doing
READ MORE STORIES ABOUT / Artificial Intelligence
Keep up.
Subscribe to our daily newsletter to keep in touch with the subjects shaping our future.
+Social+Newsletter
TopicsAbout UsContact Us
Copyright ©, Camden Media Inc All Rights Reserved. See our User Agreement, Privacy Policy and Data Use Policy. The material on this site may not be reproduced, distributed, transmitted, cached or otherwise used, except with prior written permission of Futurism. Articles may contain affiliate links which enable us to share in the revenue of any purchases made.
Fonts by Typekit and Monotype.