Galactic Collision Could Fling Our Solar System Into Intergalactic Space

The collision "could knock us out of the Milky Way." 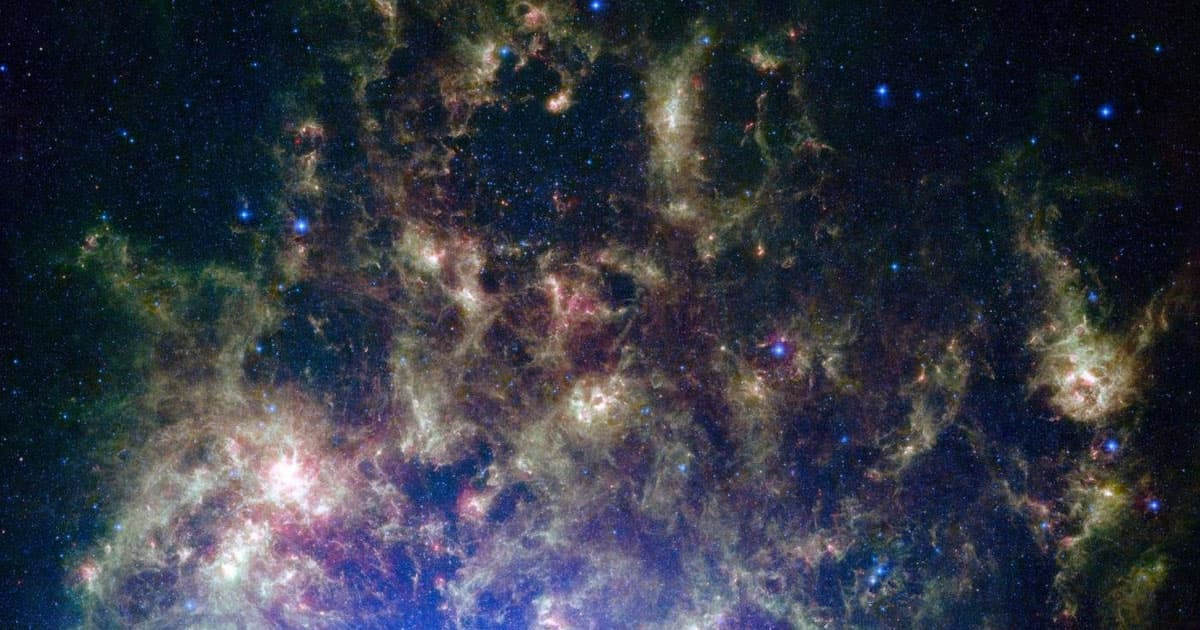 An upcoming galactic collision is likely to wake the black hole at the center of the Milky Way and turn our home galaxy into a quasar — it could even fling our solar system into intergalactic space, according to new research.

"This phenomenon will generate powerful jets of high energy radiation emanating from just outside the black hole," lead author Marius Cautun, a researcher at Durham University, said in a press release. "While this will not affect our Solar System, there is a small chance that we might not escape unscathed from the collision between the two galaxies which could knock us out of the Milky Way and into interstellar space."

Astronomers long thought that the Large Magellanic Cloud, a nearby galaxy that slid into the Milky Way's vicinity about 1.5 billion years ago, would settle into an orbit around our galaxy.

But according to the new paper, which was published in the journal Monthly Notices of the Royal Astronomical Society, the Large Magellanic Cloud has far more dark matter than previously believed. That means it has much greater mass and is more likely to slam into our galaxy than orbit it.

The epic collision will likely awaken the dormant black hole at the center of the Milky Way, causing it to gobble nearby matter and swell as much as 10 times in size.

The good news is that the galactic collision won't take place for two billion years — long after anyone currently living on Earth is gone.

But while we'll escape unscathed, the same can't be said about our galaxy.

"While two billion years is an extremely long time compared to a human lifetime, it is a very short time on cosmic timescales," Cautun said. "The destruction of the Large Magellanic Cloud, as it is devoured by the Milky Way, will wreak havoc with our galaxy," turning it "into an 'active galactic nucleus' or quasar."

More on the Milky Way: New Image Confirms a Black Hole is Swallowing Our Galaxy

Read This Next
Hello Darkness
NASA Proposes Sending Spacecraft to Measure Mysterious Dark Matter
Jupiter Jokesters
Nitwits Claim Wrongly to Have Disproved the Existence of Jupiter
Sun Screen
The James Webb Space Telescope Is Officially Unfurling Its Mighty Sunshield
Captain Planet
Planet Nine Might Not Actually Exist, Scientists Say
Phobos Anomaly
New Photos of Mars' Moon Phobos "Look Like Candy." Here's Why.
More on Off World
Love It or List It
6:45 PM on the byte
NASA Hires Company to 3D Print American Base on the Moon
Shine Bright
5:20 PM on the byte
Astronomers Annoyed at Ludicrously Bright SpaceX-Launched Satellite
Seat With a View
Yesterday on the byte
Passenger Jet Flies Over Launchpad Right as SpaceX Rocket Takes Off
READ MORE STORIES ABOUT / Off World
Keep up.
Subscribe to our daily newsletter to keep in touch with the subjects shaping our future.
+Social+Newsletter
TopicsAbout UsContact Us
Copyright ©, Camden Media Inc All Rights Reserved. See our User Agreement, Privacy Policy and Data Use Policy. The material on this site may not be reproduced, distributed, transmitted, cached or otherwise used, except with prior written permission of Futurism. Articles may contain affiliate links which enable us to share in the revenue of any purchases made.
Fonts by Typekit and Monotype.