Futurism
7. 31. 17 by The Conversation
/Future Society

Are you ready for smart toilets and robot receptionists? 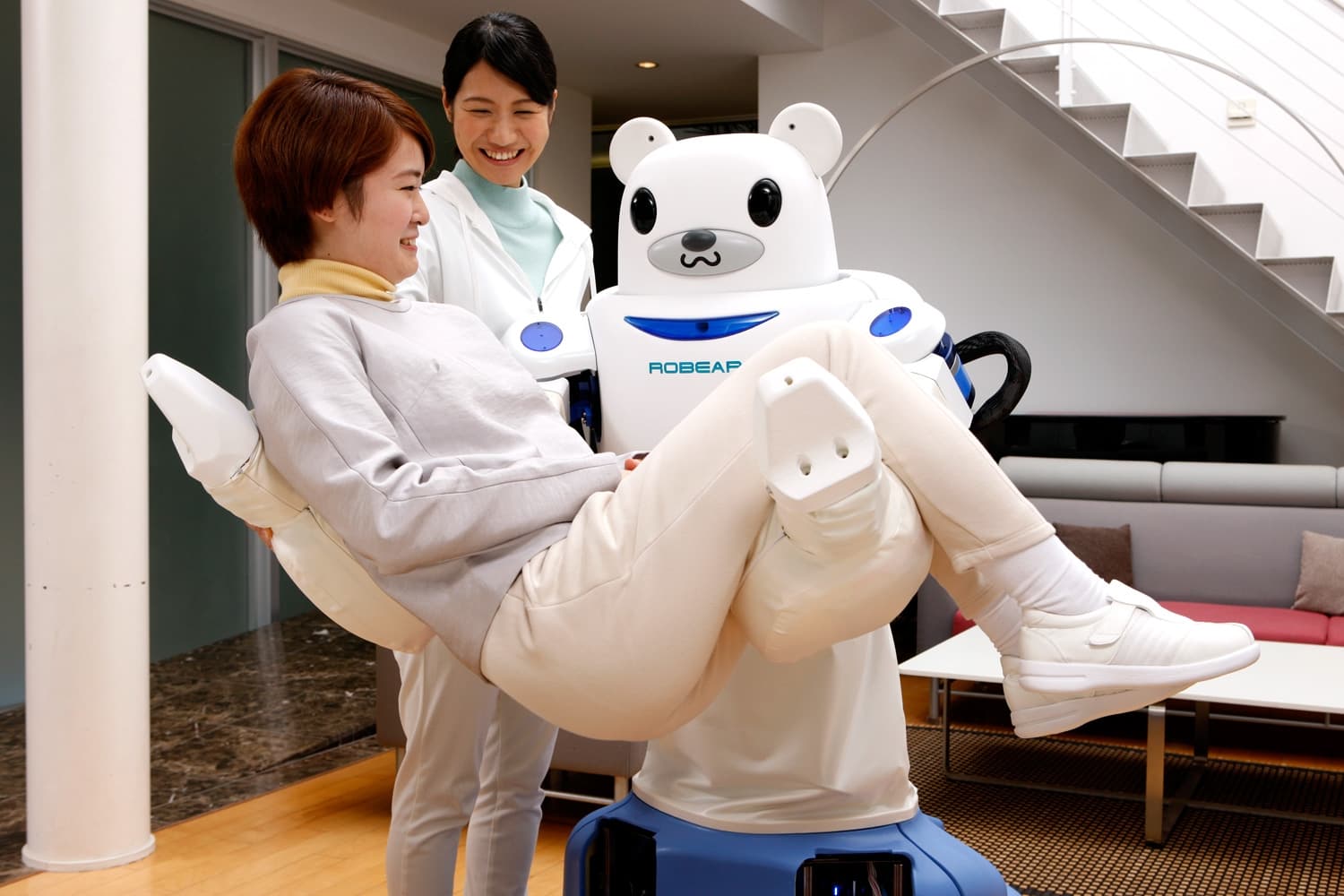 Flying warehouses, robot receptionists, smart toilets… do such innovations sound like science fiction or part of a possible reality? Technology has been evolving at such a rapid pace that, in the near future, our world may well resemble that portrayed in futuristic movies, such as Blade Runner, with intelligent robots and technologies all around us.

But what technologies will actually make a difference? Based on recent advancements and current trends, here are five innovations that really could shape the future.

Many typical household items can already connect to the internet and provide data. But much smart home technology isn't currently that smart.

A smart meter just lets people see how energy is being used, while a smart TV simply combines television with internet access.

Similarly, smart lighting, remote door locks or smart heating controls allow for programming via a mobile device, simply moving the point of control from a wall panel to the palm of your hand.

But technology is rapidly moving towards a point where it can use the data and connectivity to act on the user's behalf.

To really make a difference, technology needs to fade more into the background – imagine a washing machine that recognises what clothes you have put into it, for example, and automatically selects the right programme, or even warns you that you have put in items that you don't want to wash together.

Here it is important to better understand people's everyday activities, motivations and interactions with smart objects to avoid them becoming uninvited guests at home.

Such technologies could even work for the benefit of all.

The BBC reports, for example, that energy providers will "reduce costs for someone who allows their washing machine to be turned on by the internet to maximise use of cheap solar power on a sunny afternoon" or "to have their freezers switched off for a few minutes to smooth demand at peak times".

A major concern in this area is security. Internet-connected devices can and are being hacked – just recall the recent ransomware attack.

Our home is, after all, the place where we should feel most secure. For them to become widespread, these technologies will have to keep it that way.

While secretaries play a very crucial role in businesses, they often spend large parts of their working day with time-consuming but relatively trivial tasks that could be automated.

Consider the organisation of a "simple" meeting – you have to find the right people to take part (likely across business boundaries) and then identify when they are all available. It's no mean feat.

Tools such as doodle.com, which compare people's availability to find the best meeting time, can help. But they ultimately rely on those involved actively participating. They also only become useful once the right people have already been identified.

By using context information (charts of organisations, location awareness from mobile devices and calendars), identifying the right people and the right time for a given event became a technical optimisation problem that was explored by the EU-funded inContext project a decade ago.

At that stage, technology for gathering context information was far less advanced – smart phones were still an oddity and data mining and processing was not where it is today.

Over the coming years, however, we could see machines doing far more of the day-to-day planning in businesses.

Indeed, the role of virtual assistants may go well beyond scheduling meetings and organising people's diaries – they may help project managers to assemble the right team and allocate them to the right tasks, so that every job is conducted efficiently.

On the downside, much of the required context information is relatively privacy-invasive – but then the younger generation is already happily sharing their every minute on Twitter and Snapchat and such concerns may become less significant over time.

And where should we draw the line? Do we fully embrace the "rise of the machines" and automate as much as possible, or retain real people in their daily roles and only use robots to perform the really trivial tasks that no one wants to do?

This question will need to be answered – and soon.

We are living in exciting times, with advancements in medicine and AI technologyshaping the future of healthcare delivery around the world.

But how would you feel about receiving a diagnosis from an artificial intelligence? A private company called Babylon Health is already running a trial with five London boroughs which encourages consultations with a chatbot for non-emergency calls.

The artificial intelligence was trained using massive amounts of patient data in order to advise users to go to the emergency department of a hospital, visit a pharmacy or stay at home.

The company claims that it will soon be able to develop a system that could potentially outperform doctors and nurses in making diagnoses.

In countries where there is a shortage of medical staff, this could significantly improve health provision, enabling doctors to concentrate on providing treatment rather than spending too much time on making a diagnosis.

This could significantly redefine their clinical role and work practices.

An increasing number of mobile apps and self-tracking technologies, such as Fitbit, Jawbone Up and Withings, can now facilitate the collection of patients' behaviours, treatment status and activities.

It is not hard to imagine that even our toilets will soon become smarter and be used to examine people's urine and faeces, providing real-time risk assessment for certain diseases.

Nevertheless, to enable the widespread adoption of AI technology in healthcare, many legitimate concerns must be addressed. Already, usability, health literacy, privacy, security, content quality and trust issues have been reported with many of these applications.

There is also a lack of adherence to clinical guidelines, ethical concerns, and mismatched expectations regarding the collection, communication, use, and storage of patient's data.

In addition, the limitations of the technology need to be made clear in order to avoid misinterpretations that could potentially harm patients.

If AI systems can address these challenges and focus on understanding and enhancing existing care practices and the doctor-patient relationship, we can expect to see more and more successful stories of data-driven healthcare initiatives.

Will we have robots answering the door in homes? Possibly. At most people's homes? Even if they are reasonably priced, probably not. What distinguishes successful smart technologies from unsuccessful ones is how useful they are.

And how useful they are depends on the context. For most, it's probably not that useful to have a robot answering the door. But imagine how helpful a robot receptionist could be in places where there is shortage of staff – in care homes for the elderly, for example.

Robots equipped with AI such as voice and face recognition could interact with visitors to check who they wish to visit and whether they are allowed access to the care home.

After verifying that, robots with routing algorithms could guide the visitor towards the person they wish to visit. This could potentially enable staff to spend more quality time with the elderly, improving their standard of living.

The AI required still needs further advancement in order to operate in completely uncontrolled environments. But recent results are positive.

Facebook's DeepFace software was able to match faces with 97.25 percent accuracy when tested on a standard database used by researchers to study the problem of unconstrained face recognition.

The software is based on Deep Learning, an artificial neural network composed of millions of neuronal connections able to automatically acquire knowledge from data.

Self-driving vehicles are arguably one of the most astonishing technologies currently being investigated. Despite the fact that they can make mistakes, they may actually be safer than human drivers.

That is partly because they can use a multitude of sensors to gather data about the world, including 360-degree views around the car.

Moreover, they could potentially communicate with each other to avoid accidents and traffic jams.

More than being an asset to the general public, self-driving cars are likely to become particularly useful for delivery companies, enabling them to save costs and make faster, more efficient deliveries.

Advances are still needed in order to enable the widespread use of such vehicles, not only to improve their ability to drive completely autonomously on busy roads, but also to ensure a proper legal framework is in place.

Nevertheless, car manufacturers are engaging in a race against time to see who will be the first to provide a self-driving car to the masses. It is believed that the first fully autonomous car could become available as early as the next decade.

The advances in this area are unlikely to stop at self-driving cars or trucks. Amazon has recently filed a patent for flying warehouses which could visit places where the demand for certain products is expected to boom.

The flying warehouses would then send out autonomous drones to make deliveries. It is unknown whether Amazon will really go ahead with developing such projects, but tests with autonomous drones are already successfully being carried out.

Read This Next
Singularity Thoughts
Neuralink Co-Founder Predicts That Humanity Will Get "Wrecked"
Futurism
Crime-Fighting AI Put a Guy in Jail for a Year With Little Evidence
Bot Versus Bot
A Bot Made Frank Sinatra Cover Britney Spears. YouTube Removed It Over Copyright Claims.
Workplace Cruelty
Injuries Went Up When Amazon Deployed Warehouse Robots
Brands We Love
This App Uses Karaoke to Get You Speaking New Languages
More on Future Society
Down in Flames
Yesterday on the byte
Elon Musk Apparently Thinks Twitter Is a "Flaming Dumpster Rolling Down the Street"
All Tomorrow's Pa...
Yesterday on the byte
Party Startup Says It Has Zero Plans to Make Any Money With Investors' Funds
Primate Theft
Tuesday on the byte
It Was a Very Bad Weekend for Monkeys Being Stolen From Zoos, Apparently
READ MORE STORIES ABOUT / Future Society
Keep up.
Subscribe to our daily newsletter to keep in touch with the subjects shaping our future.
+Social+Newsletter
TopicsAbout UsContact Us
Copyright ©, Camden Media Inc All Rights Reserved. See our User Agreement, Privacy Policy and Data Use Policy. The material on this site may not be reproduced, distributed, transmitted, cached or otherwise used, except with prior written permission of Futurism. Articles may contain affiliate links which enable us to share in the revenue of any purchases made.
Fonts by Typekit and Monotype.