Here’s what tomorrow’s cities are likely going to look like. 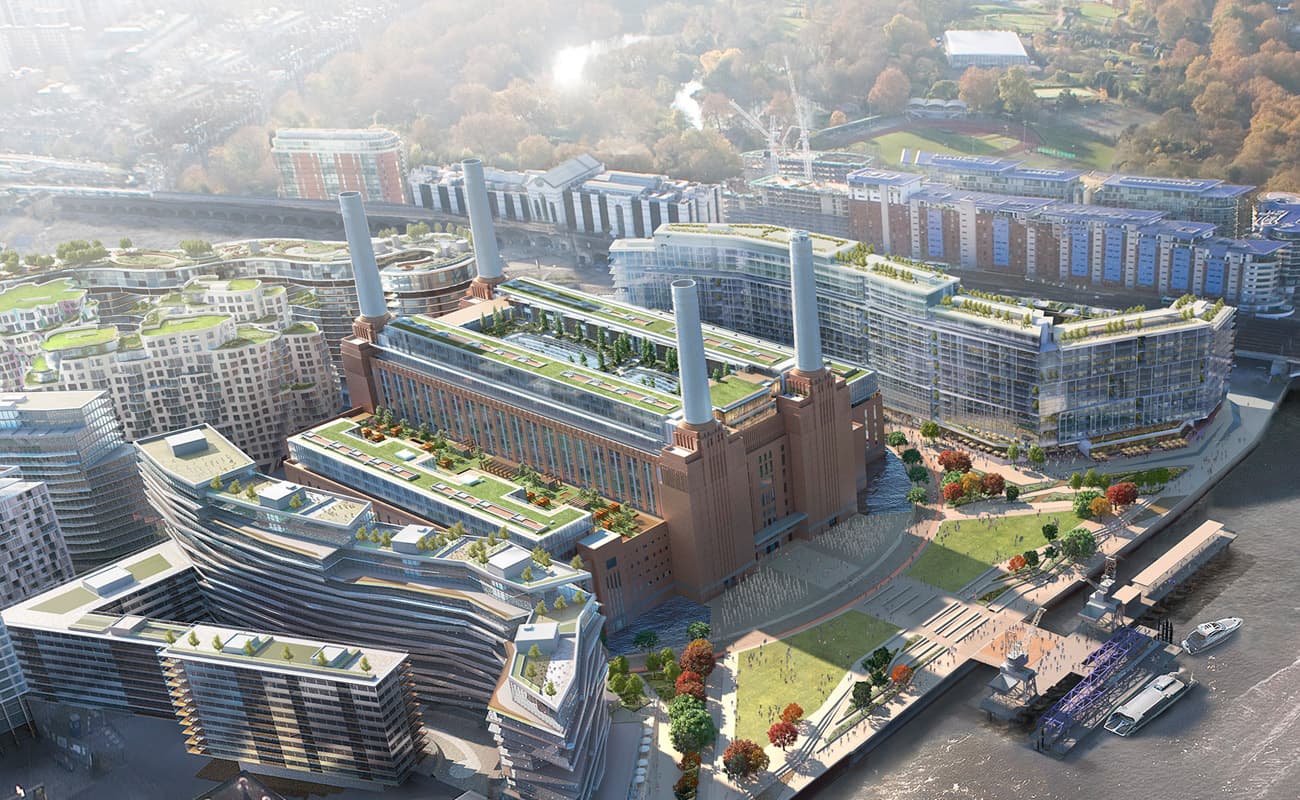 The world is rapidly urbanizing. The United Nations predicts that the number of people living in cities could double by 2050 — to 6.5 billion.

To accommodate growing populations, cities like Paris, New York, and Tokyo are building more housing and public resources, including parks, schools, and subways, as part of large redevelopment plans.

These cities will likely look very different (and in some neighborhoods, gentrified) in the coming decades. Take a look at some of the biggest urban projects under construction below.

Set to be complete by 2020, Todtown is a new mixed-use development in Shanghai's Minhang District.

The development will feature 1,000 apartment units, a 1.3 million-square-foot shopping mall, an additional 580,000 square feet of retail, 1.5 million square feet of office space, and a 53,000-square-foot cultural center, according to InHabitat. Todtown will also incorporate lots of greenery, from green roofs to mini parks scattered throughout.

The development is being financed largely by Chinese developers. (The China Fortune Land Development Company, for instance, put down $20 billion for the project in late 2016, according to CNN.)

New Cairo Capital will also feature 1,250 mosques and churches, a 5,000-seat conference center, nearly 2,000 schools and colleges, over 600 medical facilities, and what is projected to be the world's largest park.

Egypt Housing Minister Mostafa Madbouly told the BBC that the project would cost $45 billion and be complete by 2022. Construction began in 2015.

Designed by Danish architecture firm Bjarke Ingels Group (the company behind Google's California headquarters), Europa City promises housing, shops, and restaurants, though the exact numbers of each are not confirmed yet. The development is also slated to include plazas, an artificial ski slope, open walkways, a golf system, and a new transit system.

Triangle de Gonesse, the suburb where it will be located, is still largely rural. But according to Europa City's developers, the goal of the $3.4 billion project is to connect the area with urban Paris and reduce congestion downtown.

Berlin is building a new neighborhood called Europacity. Spanning nearly 100 acres, the mixed-use development near the Berlin Central Station is set to become a new commercial and residential hub.

The masterplan, which will be complete by 2025, calls for 2,000 apartment units, 4.3 million square feet of office and retail space, a promenade, a school, roads, bridges, and a public square. Construction began in early 2014, though the exact cost of the project has not been announced.

New developments like Europacity have been a point of contention for some Berliners, who are fighting against the city's recent rapid gentrification.

New City Istanbul is a development that re-imagines the 8,000-year-old river city.

In April 2016, the Metropolitan Municipality Council approved the plan to build approximately 50,000 residences in seven towers on the few remaining large slots of land near Istanbul's center, local news outlet The Daily Sabah reported. The 93.6 million-square-foot area was once a military zone.

The development will also feature a shopping center, a 6,200-space underground parking garage, a 26.9-million-square-foot park, a movie theater, an ice rink, and an airport that's being billed as the world's largest.

The exact timeline and cost for the project has not been disclosed yet, but construction began in late 2016. The airport alone, set to open in 2018, has attracted over $6 billion in funding.

Since the September 11 attacks in 2001, New York City has been working to redevelop the 16-acre Manhattan site where the Twin Towers and surrounding buildings stood.

As of July 2017, much of the project has been completed, including 1 World Trade Center (also known as the Freedom Tower, the tallest skyscraper in the city), 4 World Trade Center, 7 World Trade Center, a new transit hub, the 9/11 memorial and museum, a mall, and a park. Three more towers, a small church, and a performing arts center are still in the works. Construction is set to be finished by 2020.

It will feature a mix of housing, including single-family homes, condos, and apartments, with about 10% (or more than 2,000 units) priced at below-market rates. Newhall Ranch was originally proposed in 1994, but developers had trouble breaking ground due to legal troublesfrom environmental groups that said the $14 billion project would severely disrupt the local ecosystem.

Newhall Ranch will start out as two villages with 5,500 homes and 2.5 million square feet of retail space between them, according to local radio station KPCC. It will also preserve 10,000 acres of public outdoor space.

While Los Angeles' pace of housing development is slowing in 2017, the city is still on track to meet Mayor Eric Garcetti’s goal of 100,000 new units by 2021. As Curbed notes, a new reportfrom Abundant Housing shows that 3,850 units were permitted in the first quarter of 2017, a number slightly smaller than in the first quarter of last year. LA is dealing with an affordable housing shortage of at least 500,000 units, according to the nonprofit California Housing Partnership Corporation.

In 2014, São Paulo unveiled its new master plan, which will dramatically change the city over the next two decades.

The plan calls for more people-oriented development, including new housing, bike lanes, dedicated bus lanes, and a reduction in the number of existing parking spaces.

According to the new master plan, the city plans to build 717,000 new residential units, 240,000 of which will be designated as affordable, by 2030. The Centro de Acçao Social por Música, which was completed in 2015, was one of the first buildings included in the plan to open. The four-story community center includes a bus stop, playing field, urban farm, terrace, and performance hall.

Tokyo is preparing for the 2020 Summer Olympics, which has spurred a number of redevelopment projects in the city. Citywide, at least 45 new skyscrapers will be constructed by 2020 — a 50% increase in high-rises over the next three years, according to Bloomberg.

Seven skyscrapers will be part of the Shibuya Station Area Redevelopment project: Six will be used for offices and retail, and one will be a 32-story condo building. The plan also calls for a redeveloped "Shibuya River," a narrow pedestrian walkway that will feature new shops and greenery when it opens in early 2018.

The full multi-billion-dollar project is set to be complete by 2027.

The renovation of the Battersea Power Station — the iconic building featured on the cover of Pink Floyd's 1977 album "Animals" — is at the center of a larger mega-development in London's Nine Elms neighborhood.

The estimated $16.5 billion (£13 billion) project will include new residential and commercial complexes, including apartments, hotels, and offices. Construction is slated to proceed in seven phases — the first began in 2014 and the last is expected to finish in 2025.

Apple, the complex's anchor tenant, will move its London headquarters to the former power station in 2021. The company is expected to take up 40% of the building's available office space.

In early August, the city of Madrid approved the $7.1 billion redevelopment projectfor Castellana Norte, a district north of downtown.

Currently, the site is home to a municipal bus station, a few houses, and a series of half-abandoned industrial buildings and warehouses. The redevelopment will turn Castellana Norte into a new neighborhood with skyscrapers, parks, roads, bridges, and apartments for an estimated 17,000 people, by 2035.

Read This Next
Futurism
The World of Tomorrow: What Will Your City Look Like in The Future? [Sponsored]
Futurism
As "Smart Cities" Come Into Focus, California Laws Seek To Limit Surveillance Technology
Futurism
Hackers Are Holding The City of Atlanta Hostage
Futurism
To Slow Urbanization, China Is Capping Populations In Two Of Its Biggest Cities
Futurism
Smart Cities May Be The Death of Privacy As We Know It
More on Future Society
Bird Crap
Yesterday on the byte
It Looks Like Elon Musk Is Actually Building a Twitter Payment Platform
Balloon News
Friday on futurism
China Says "Spy Balloon" Soaring Over America Is Completely Innocent
Down in Flames
Wednesday on the byte
Elon Musk Apparently Thinks Twitter Is a "Flaming Dumpster Rolling Down the Street"
READ MORE STORIES ABOUT / Future Society
Keep up.
Subscribe to our daily newsletter to keep in touch with the subjects shaping our future.
+Social+Newsletter
TopicsAbout UsContact Us
Copyright ©, Camden Media Inc All Rights Reserved. See our User Agreement, Privacy Policy and Data Use Policy. The material on this site may not be reproduced, distributed, transmitted, cached or otherwise used, except with prior written permission of Futurism. Articles may contain affiliate links which enable us to share in the revenue of any purchases made.
Fonts by Typekit and Monotype.