This remarkable planet is hotter than 80% of stars. 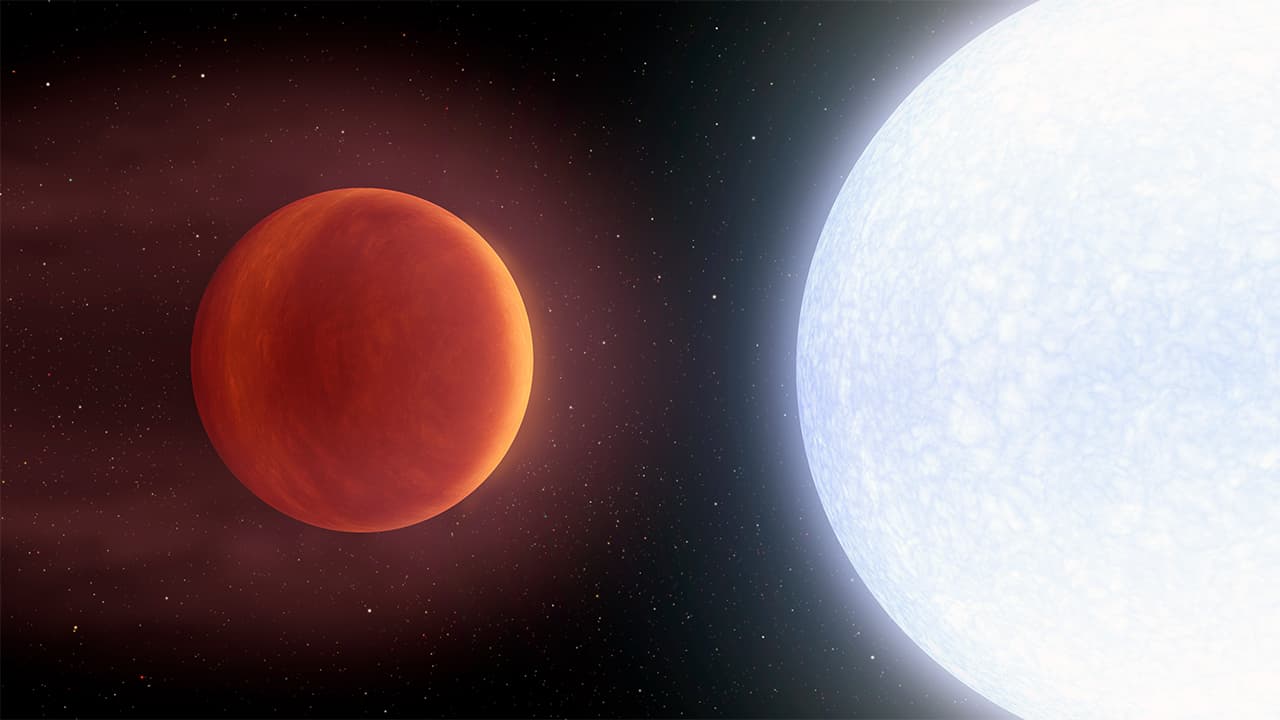 Scientists have found one of the craziest exoplanets yet. It's a huge gas giant not unlike our Solar System's own Jupiter, but it travels around its star in just 1.5 days, with a surface hotter than most stars.

The planet orbits a blazing star called KELT-9, which is some 650 light-years away. It's the first time astronomers have detected a planet near a star this hot, and it's different from anything they've seen before.

The reason for this insane heat is the intimate proximity the gas giant has to its host star, which is itself among some of the hottest stars we know, reaching temperatures of roughly 10,170 Kelvin.

"It would be fair to say that this planet is hotter than at least 80 percent of all known stars, which is just mind-blowing," astronomer Jonti Horner from the University of Southern Queensland, who wasn't involved in the research, told ScienceAlert.

"It's essentially skimming the surface of its star, and the star itself is much more luminous and much hotter than our Sun. [It makes] this the hottest planet we've found to date by quite a long margin, by more than a thousand degrees."

As a gas giant, KELT-9b is actually 2.8 times more massive than Jupiter, but only half as dense, as its atmosphere is constantly blasted by its intense host star.

"It's a planet by any of the typical definitions based on mass, but its atmosphere is almost certainly unlike any other planet we've ever seen just because of the temperature of its day side," one of the researchers, astronomer Scott Gaudi from Ohio State University, said in a press statement.

In fact, the planet is suffering such intense heat, researchers are surprised it exists at all. "I'm genuinely surprised to see this planet," Swinburne University astronomer Alan Duffy, who wasn't involved in the study, told ScienceAlert.

"Because when you have a very massive, very bright star, the force of its radiation is so intense that it can actually blast the material away from around it. There's just not a lot of gas and dust left to form these [planets]."

The harsh conditions in the vicinity of KELT-9 are likely to make this newfound planet's life both short and cruel. The team estimates that the planet is losing at least 10 million kilograms of mass per second (22 million pounds), possibly forming a tail similar to those we see on comets.

This is pushing back the edge of what we can achieve.

That means it probably won't be long before the planet is either completely gone, or blasted down to a barren, solid rock core (we don't yet know if planets like KELT-9b have rocky cores or not). The study was co-authored by an international team of researchers and amateur astronomers, and according to Horner, it involved some truly challenging observations.

"This is pushing back the edge of what we can achieve technologically as well as what we know could be out there," he told ScienceAlert. "This is groundbreaking in many, many ways."

Scientists typically focus on finding exoplanets around smaller, dimmer stars akin to our Sun, because they're easier to spot and carry the promise of discovering liveable planets outside our own corner of the galaxy.

But this new glimpse at hellish KELT-9b widens our understanding of what could be out there, and how planets are born and destroyed. "It means that we can be perhaps even more audacious and imagine that we can have planets around even larger and brighter stars than we've ever hoped," Duffy told ScienceAlert.

Now that they've made this fascinating discovery, researchers hope to get a better look at KELT-9b with other telescopes soon, including the powerful James Webb Space Telescope that NASA is launching next year.

The discovery has been reported in Nature.

Read This Next
It's Baby
NASA's TESS Mission Has Spotted Its Smallest Exoplanet Ever
Water Worlds
Exoplanet "Water Worlds" Could Hold Unfathomably Deep Alien Oceans
Eyes Up Here
New AI Is Peering Into the Nuclear Cores of Distant Stars
Futurism
Astronomers Just Discovered Three Planets in an Entirely New Way
Futurism
Lights Out: DARKNESS Camera Filters Starlight to Spot Planets
More on Off World
Killernova
Yesterday on the byte
Scientists Find "One in Ten Billion" Star System Primed to Explode in Titanic Kilonova
Lonely Planet
Feb 5 on futurism
Scientists Find Nearby Planet the Same Size of Earth, Plan to Search It for Life
Take Cover
Feb 4 on the byte
Space Startup Blows Up Another Giant Inflatable Space Station Module
READ MORE STORIES ABOUT / Off World
Keep up.
Subscribe to our daily newsletter to keep in touch with the subjects shaping our future.
+Social+Newsletter
TopicsAbout UsContact Us
Copyright ©, Camden Media Inc All Rights Reserved. See our User Agreement, Privacy Policy and Data Use Policy. The material on this site may not be reproduced, distributed, transmitted, cached or otherwise used, except with prior written permission of Futurism. Articles may contain affiliate links which enable us to share in the revenue of any purchases made.
Fonts by Typekit and Monotype.