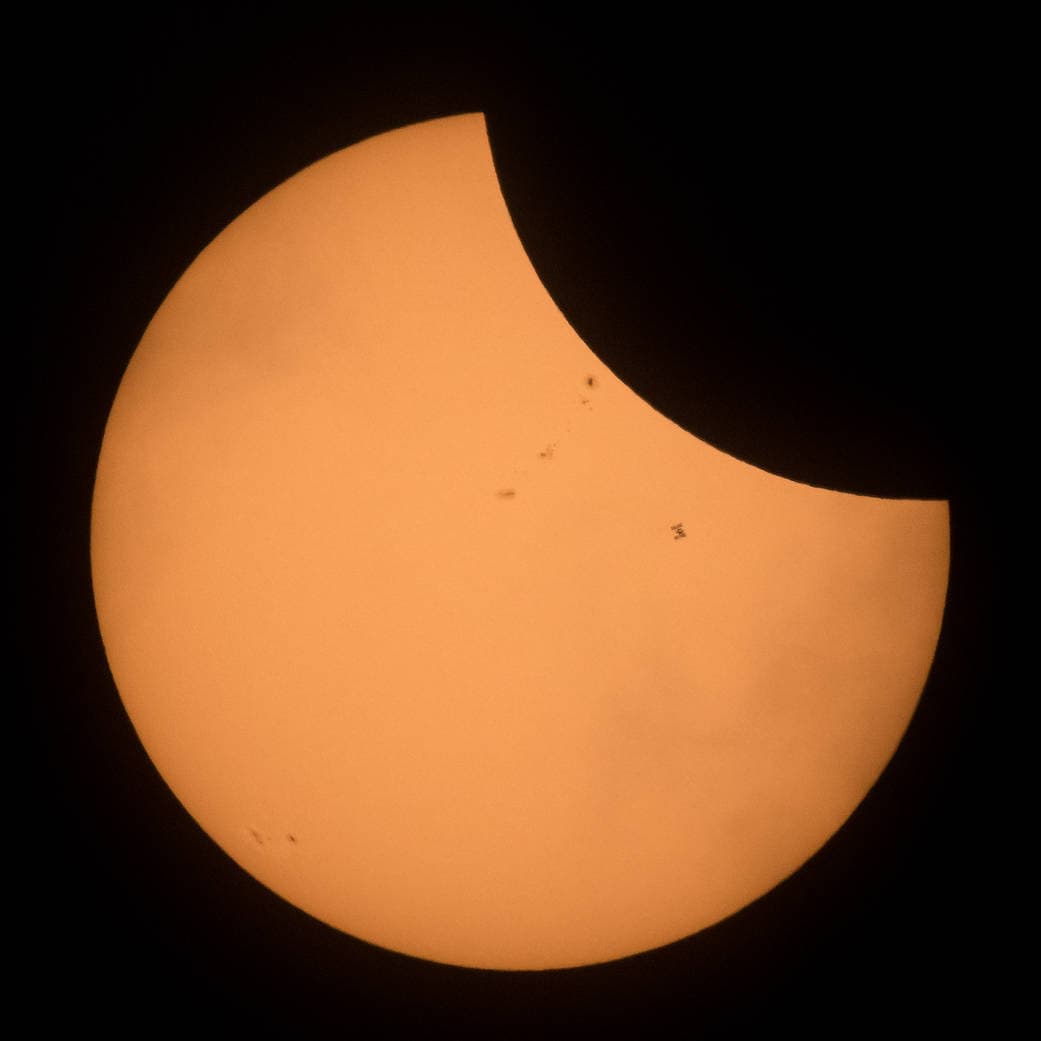 As the moon sneaked in front of the sun during Monday's total solar eclipse, a NASA photographer captured a once-in-a-lifetime sight.

Joel Kowsky, one of the space agency's photo editors, was in Banner, Wyoming, to watch the solar eclipse when he photographed the International Space Station zooming in front of a crescent sun.

Below is a video Kowsky recorded using a high-speed camera that recorded 1,500 frames a second. He also photographed the ISS with a standard camera.

Such high-speed recording is necessary because the ISS is roughly the size of a football field, orbits Earth from 250 miles up, and moves at a speed of 17,500 mph.

To capture such a fast-moving object from the right angle requires not only months or years of planning but also a lot of luck.

Read This Next
Don't let the door hit you
Elon Musk Lobs Casual Space Station Burn at Moscow
Buh Bye
Russia Says It's Definitely Quitting the ISS But Doesn't Say When Exactly
Don't Let the Door Hit You
Russian Space Chief Leaving Post, May Be Headed to War Zone
Gone Girl
Rumors Swirl That the Deranged Head of the Russian Space Program Is Getting Fired
Virts Ramp
Former NASA Astronaut Says America Should Cut Russia Loose on the Space Station
More on Off World
Light Me Up
Yesterday on the byte
Wall of Lasers Cuts Across Hawaii's Night Sky
Water Sign
Yesterday on the byte
Scientists Find New Evidence of Hidden Ocean World in Our Solar System
Trashing Orbit
Thursday on the byte
Elon Musk Says SpaceX May Build Starship That Dies on Purpose
READ MORE STORIES ABOUT / Off World
Keep up.
Subscribe to our daily newsletter to keep in touch with the subjects shaping our future.
+Social+Newsletter
TopicsAbout UsContact Us
Copyright ©, Camden Media Inc All Rights Reserved. See our User Agreement, Privacy Policy and Data Use Policy. The material on this site may not be reproduced, distributed, transmitted, cached or otherwise used, except with prior written permission of Futurism. Articles may contain affiliate links which enable us to share in the revenue of any purchases made.
Fonts by Typekit and Monotype.