What Happens When We Don't Vaccinate? 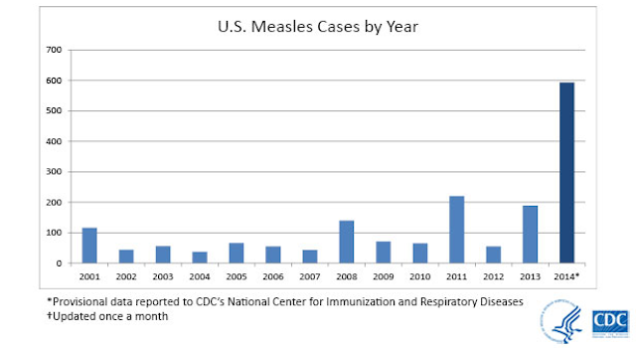 The latest numbers from the Center for Disease Control (CDC) show us exactly what happens when people stop vaccinating.

By now, we are all very familiar with the vaccine debate. It is an issue that has gotten a lot of press recently, and the numbers recently released from the CDC reveal why. This year, there have been some 600 confirmed cases of measles reported to the CDC's National Center for Immunization and Respiratory Diseases (it is important to note that these are just the reported instances; there may be [and likely are] cases that were not reported).

Admittedly, these numbers may not sound too alarming, especially when one remembers that there are nearly 314 million people in the United States. However, in truth, the statistic is rather troublesome. Measles is a disease that was eliminated from the United States more than a decade ago. In 2000, measles was gone from our country. And now it's back. By May of this year, the country already registered more than 280 cases of measles.

Ultimately, looking over reports from the past decade, that's more cases in 5 months than we've had in an entire year.

Some people may still scoff at these numbers, despite the irrefutable incline. After all, out of every 1,000 children who get measles, only one or two will die. Yet, that's one or two deaths that were entirely preventable. And as the CDC notes, before the introduction of the vaccine, "an estimated 3–4 million people in the United States were infected each year, of whom 400–500 died, 48,000 were hospitalized, and another 1,000 developed chronic disability from measles encephalitis." Worldwide 450 people die from measles each day. 18 an hour.

Vaccinations are vital to keeping these number down.

What's more, although these individuals are still in the minority, the anti-vaccine movement seems to be gaining ground. For example, at Santa Cruz Montessori, a school located in California, about 7% of kindergartners in 2007 got "belief exemptions" and did not receive vaccinations; last fall (2013), the number had risen to 22.6%. Indeed, across California (one of the most populated states in the U.S.) parents are refusing to vaccinate their children at twice the rate they did seven years ago.

And sadly, the cause of the measles resurgence is as clear. To quote Dr. Anne Schuchat, assistant surgeon general and director of the CDC's National Center for Immunization and Respiratory Diseases: "The current increase in measles cases is being driven by unvaccinated people." "We have schools in California where the percent of children who exercise the personal belief exemption is well above 50%," Dr. Gil Chavez, deputy director of the California Department of Public Health's Center for Infectious Diseases, told the LAT. "That's going to be a challenge for any disease that is vaccine preventable."

Remember: There are a number of people who cannot get vaccinated because of other, outstanding medical conditions. If you choose not to vaccinate, you're not the only one who could be affected.

Of course, as is true of all things, vaccines do harbor some risks. And it is important to know those risks. They can cause rashes or other, more severe allergic reactions, but such instances are exceedingly rare (far rarer than the number of people that contract these illnesses without vaccines). Ultimately, the important thing to remember is this: Vaccines save lives. For example, smallpox is one of the deadliest known diseases, plaguing humanity for thousands of years. Researchers believe that it first emerged in human populations around 10,000 BCE. Although the overall death toll is unknown, in the 20th century alone it killed over 300 million people. In 1967, the World Health Organization estimates that small pox killed an estimated 2 million people worldwide. And keep in mind, this is just one virus over the course of one year. Ultimately, the total number of people killed by viruses is simply staggering.

Today, no one dies of smallpox. Not one person.

Ultimately, this deadly disease was eradicated by vaccinations. The last natural occurring case was in 1977. Vaccines did that. That's not to say that there are not risks associated with the vaccine, but we went from 2 million deaths a year to absolutely zero.

Study of 1.3 Million Kids Reveals No Link Between Vaccines And Autism

Scientific Progress for Malaria Vaccine, but with Practical Limitations