What Gives Rain Its Smell? 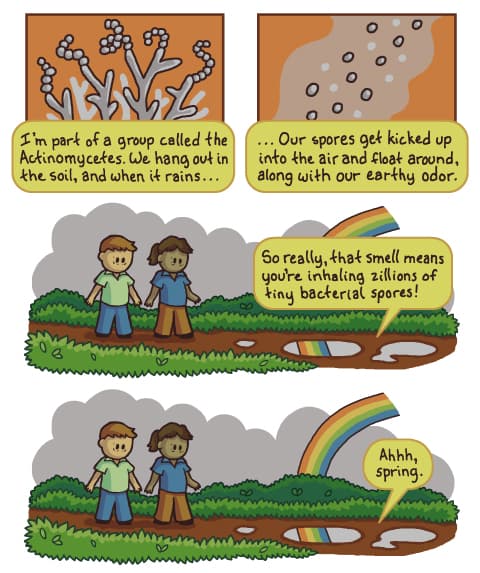 After a long dry spell, the stage is set for one of nature's most fantastic smells, known as the "after rain smell". A rainstorm moves through, breaking the dry spell, and the outside world has a different vitality to its scent. It's a refreshingly clean smell that most people tend to enjoy. What causes it? That's actually a very good question, and you know what they say about "good questions"; if the best response you get is "that's a good question" then the question is better than the answer. Scientists have a few hypotheses aimed at explaining this phenomenon, but they don't *really* know.

Part of that invigorating smell is probably the result of ozone. Traditionally, ozone resides in the upper atmosphere. Ozone is a triatomic molecule, which basically means 'three', and is created with the help of the diatomic (two) allotrope we all know as O2 – or your standard run-of-the-mill oxygen. When ultraviolet light strikes O2, it breaks apart and due to some cool forces of nature, the free oxygen combines with another O2 molecule and poof! Three oxygen atoms are joined together and exist as ozone.

Industrially speaking, ozone is great at absorbing things we don't want to smell or see (it's commonly used in air fresheners, bleaches, and other like products). Ozone is VERY bad to breathe. When inhaled, ozone is in the habit of splitting open cells in the lungs and causing various enzymes to leak all over the place. But, you know what they say, you can't have pleasure without a little pain – fortunately for us, there isn't enough ozone present after a good rain to do a ton of damage (so, take as many deep breaths as you want, you're good).

The other main theory for the after rain smell revolves around actinomycetes – a type of bacteria that grows in dirt. These little dudes are very important for a variety of reasons, but their 'usefulness' extends to some sensory pleasure after a nice rainstorm. These bacteria produce some antibiotics from the dirt they reside in (I know, bacteria producing antibiotics because why not). These actinomycetes like wet dirt and, when that dirt dries out, they "put out spores" which allow them to survive. The rain then strikes the dirt, kicks up these spores, and the bacteria return to living the good life.

So, the after rain smell is likely the smell of ozone, bacterial spores, and antinomycetes waking up and buzzing back to activity.