What Does Our Light Signature Reveal About Earth? 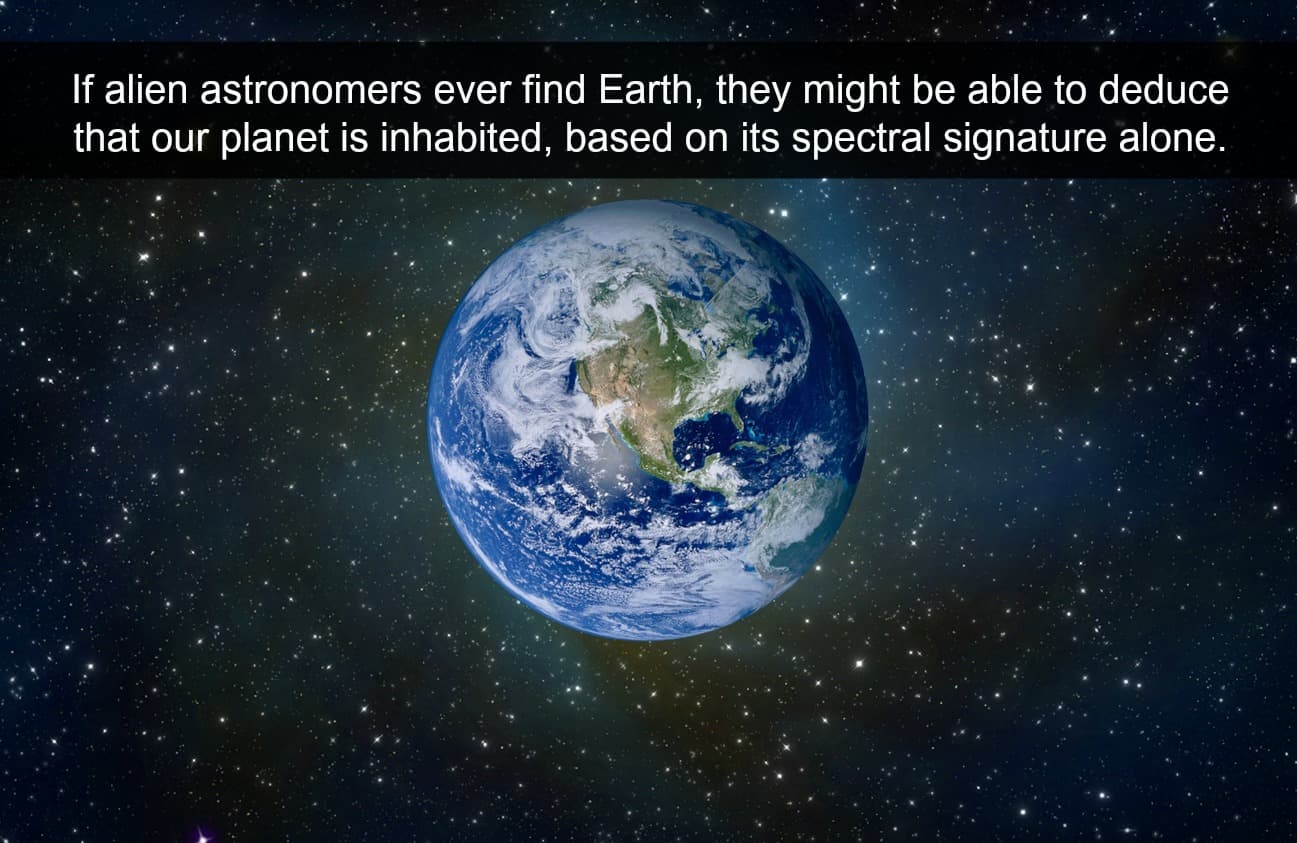 Thanks to various space telescopes like Kepler and Hubble, we've discovered in recent years that exoplanets far outnumber the stars in the Milky Way galaxy. With there being billions of stars, there could potentially be trillions of planets. Perhaps some of them may be habitable to the point of allowing a window of billions of years for life to evolve to be intelligent. No one really knows for sure, but thanks to these wonderful programs, we can look at certain planets and determine their age, size, mass, orbital period, density, chemical composition and even pertinent information about the atmospheric conditions on an exoplanet. Now, we know that the speed light travels in a given time is a constant, therefore, we are prevented from being able to see the "true" light that's being emitted from a galaxy, star or planet. We're literally looking into the past. Any other planet that's home to intelligent beings would also be plagued by the same problems as us if they were looking at our planet from several hundreds of light years away. So, what could they determine about Earth and its occupants by studying our past light emissions?

First of all, let me briefly touch on our exoplanet detection methods, as they are important in uncovering relevant information about celestial objects. Of course, our planet is small in comparison to most of the exoplanets we've observed thus far. In fact, it's difficult to observe smaller terrestrial bodies like Earth (and Venus, for that matter) using any of the methods we've discovered for planet scouting. Most commonly, we observe a star for several orbits to see dips in light that only occur when a planet is passing in front of its parent star relative to our vantage point. The larger the planet, the more light is obstructed. Therefore, the smaller planets are extremely difficult to see. Because of this, most of the planets we've discovered have been huge Jupiter sized bodies consisting mainly of gas that happen to be orbiting unusually close to their parent star. (hot-Jupiters is what they're commonly referred to as. Most orbit their star from only a fraction of the distance separating Mercury and the Sun.)

However, it would be unwise to assume that any intelligent race of aliens would have the same technological handicaps as we have. After all, they could be thousands or MILLIONS of years more advanced than we are. So, if they pointed their instruments at our sun and spotted a seemingly uninteresting lump of rock orbiting close within the space where liquid water could exist on our planet, it isn't unthinkable that they wouldn't be able to reach the conclusion that Earth is indeed, special (at least we think so) At least it is to a certain degree.

It would be relatively easy for an alien astronomer to deduce our orbital period and rotational speed. They also wouldn't have a difficult time deciphering that Earth has land, water and clouds based on the myriad of different spots on our planet that has differing levels of reflectivity. Looking at the spectrum of Earth's light, they would see the blue of our oceans, the white of our puffy clouds, the green of our vegetation, the hydrogen and water vapor in our atmosphere. Basically, they would see a planet that's consistent with all of the ingredients for life. Astrophysicist Sara Seager, who  took part in the Epoxi mission that was sent out to study comets before taking a brief look at Earth's spectrum, believes intelligent beings would definitely know the Earth is an active, vivacious place.

"If an alien is looking back at us from far away, the aliens would see that we have oxygen in the atmosphere. In fact, our atmosphere has 20% oxygen by volume. What's so fascinating is that, without life, our Earth would have basically 10 billion times less oxygen. So, oxygen would be essentially non-existent on Earth. And oxygen on Earth is created by life, so those aliens would know that oxygen in such large quantities should not be in our atmosphere unless it is being continually produced by something. And nothing that we know of in geophysics can produce so much oxygen. And that's why we attribute it to life."

For now, we'll keep looking and searching. Just know, an advanced race of intelligent beings, located several hundreds, perhaps even thousands of light-years away, may be watching us, checking up on our progress. We already do our part in trying to communicate, as our radio signals have been leaking into space for decades now.