How To Watch This Week's Partial Solar Eclipse 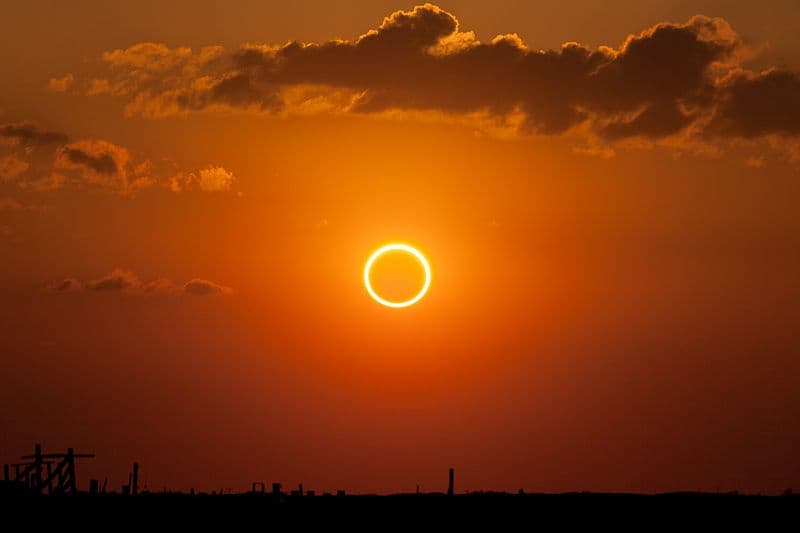 This week, the Sun is going to have a visit from a friend (kind of). On Thursday, October 23rd we are going to get a partial solar eclipse. And the viewing will be ripe for those living in the United States. Nearly all of North America, except for a portion of eastern Canada and a slice of eastern New England, will be able to see the sight (weather permitting, of course).  Parts of Siberia will  also be able to get a brief view around local sunrise time; however, for them, this will take place on Friday, October 24th because of the International Date Line.  From the Eastern U.S., the eclipse will reach maximum around the time of sunset

For those who may not be aware, a solar eclipse occurs when the Moon gets in between Earth and the Sun. This causes the Moon to cast a temporary shadow over the our planet. However, unlike a total eclipse of the sun, where the Moon completely covers the Sun for a few fleeting moments, a partial solar eclipse can be viewed without a sense of urgency. No need to worry about missing those brief moments of total darkness; the Moon usually takes about two hours to fully traverse the Sun's disk, and some of the Sun will be visible at all times.

It may seem odd that the Moon is able to (seemingly) cover the Sun so perfectly. However, it all has to do with being at the right place at the right time. Since the Moon formed some 4.52 billion years ago, it has been slowly drifting away from the Earth. At present time, it is just far enough away to almost completely eclipse the Sun. This is because our star has a diameter of some 864,000 miles (1.39 million km). This makes the diameter of the Sun 400 times greater than the Moon (which measures just 2,160 miles/3,470 km). And by a happy accident, the Moon also happens to be about 400 times closer to the Sun than the Earth. Thus, the size of the Moon, coupled with its distance from the Earth, puts our satellite in the perfect place to block the Sun.

Do you want to know how you can safely view the Sun? After all, it is the Sun, and it gives off quite a bit of light and energy (even during an eclipse when some of it is shaded). Observations can be made with your naked eyes, binoculars, or a telescope. If your camera is capable of taking multiple exposures through a wide-angle lens, you may be able to catch the entirety of the event in a composite scene; however, you will need a telephoto lens if you want to be able to see any of the details, like the jagged edges on the lunar surface.

If you aren't really high-tech, and just want to look at the Sun with your eyes, here's how you can do it and keep your sight:

READ NEXT: Solar Eclipse Followed By An Amazing Flare (VIDEO)