Watch Neutron Stars Rip Each Other Apart to Form a Black Hole: 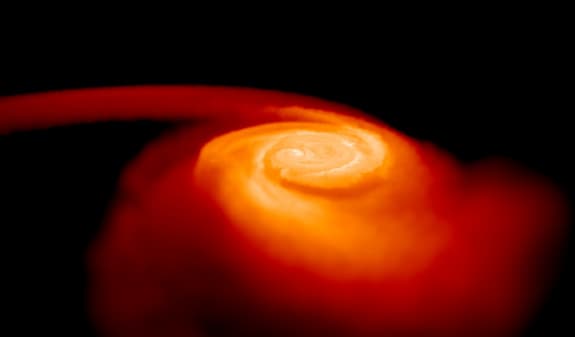 Neutron stars are the dense, core remnants of large stars that can no longer support nuclear fusion. These beasts are small, but they are amazingly massive. Neutron stars pack about 1.5 times the mass of the sun, which is equivalent to about half a million Earths. And all of this is packed into a ball just 12 miles (20 km) across. Think you’re overweight? Before you jump to your nearest treadmill, ponder some of these neutron star facts. 5 milliliters, or one teaspoon of neutron star material, equals the weight of about 900 Great Pyramids of Giza. One sugar cube equates to 100 billion tons. A cubic meter? The entire weight of the Atlantic Ocean. With an escape velocity of 100,000 km/s (Earth’s is a puny 11.3 km/s), a fall from 1 meter above a neutron star would only take one microsecond, and you would impact at around 2000 km/s, or 7.2 million kilometers per hour. This force would destroy all your component atoms, rendering all your matter identical.

The below video is a supercomputer simulation showing one of the most violent events in the universe: A pair of massive neutron stars colliding, merging, and forming a black hole. As the simulation begins, we view an unequally matched pair of neutron stars weighing 1.4 and 1.7 solar masses. They are separated by only about 11 miles. NASA explains what we see in this video:

As the stars spiral toward each other, intense tides begin to deform them, possibly cracking their crusts. Neutron stars possess incredible density, but their surfaces are comparatively thin, with densities about a million times greater than gold. Their interiors crush matter to a much greater degree densities rise by 100 million times in their centers. To begin to imagine such mind-boggling densities, consider that a cubic centimeter of neutron star matter outweighs Mount Everest.

By 7 milliseconds, tidal forces overwhelm and shatter the lesser star. Its superdense contents erupt into the system and curl a spiral arm of incredibly hot material. At 13 milliseconds, the more massive star has accumulated too much mass to support it against gravity and collapses, and a new black hole is born. The black hole's event horizon — its point of no return — is shown by the gray sphere. While most of the matter from both neutron stars will fall into the black hole, some of the less dense, faster moving matter manages to orbit around it, quickly forming a large and rapidly rotating torus. This torus extends for about 124 miles (200 km) and contains the equivalent of 1/5th the mass of our sun.

Watch the simulation below, then watch a (insanely, insanely unlikely but scientifically accurate) discussion of what would happen if a neutron star his Earth.